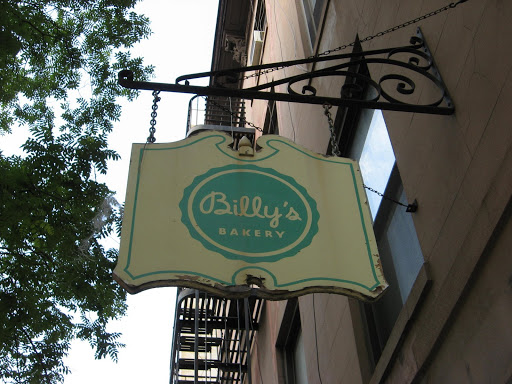 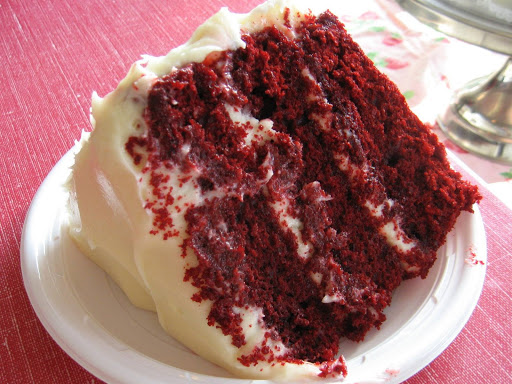 This is sort of embarrassing to admit, but here goes—Jessica Simpson introduced me to Red Velvet Cake. She also introduced me to the importance of keeping marriage and reality television separate, but that’s neither here nor there. On an InStyle television special to promote Newlyweds and her book I Do: Achieving Your Dream Wedding (ha!), she revealed that the top tier of her wedding cake was Red Velvet (her favorite southern treat). If I remember correctly, that was sometime in 2003 and ever since then, I’ve been eager to sample a slice.

Which brings us to now—four years later and my desire to try Red Velvet is still intact; I wish I could say the same about the marriage between Simpson and Lachey. After reading an article in early February by Florence Fabricant in the New York Times titled “So Naughty, So Nice” about the Red Velvet boom in New York City, I knew a bakery whipping up an excellent Red Velvet had to be included on the food tour. 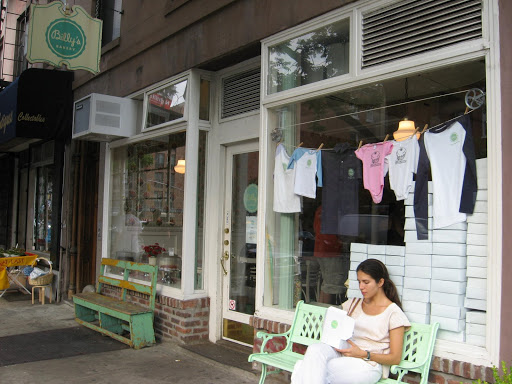 After our second lunch at the Shake Shack, The Astronomer and I walked across town to Billy’s Bakery. According to Fabricant, a majority of tasters for her article enjoyed Billy’s rendition of Red Velvet.

With half a Luger Burger and an entire concrete in my belly, I was hoping to get a Red Velvet cupcake, but sadly they were fresh out. My only choice was to order an entire slice, which The Astronomer estimated was at least five inches tall and weighed close to a pound.

Aesthetically speaking, the Red Velvet cake is a real beauty. Three layers of deep red cake are iced with thick cream cheese frosting. The intense color contrast between the red and white is truly mesmerizing to behold. 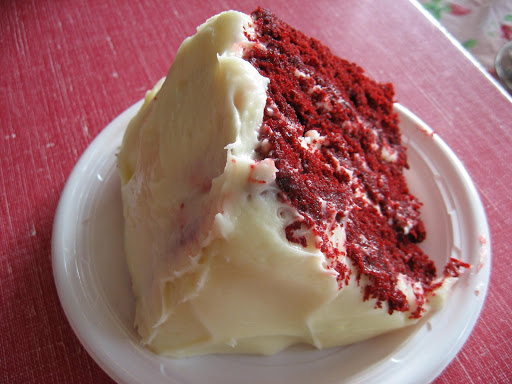 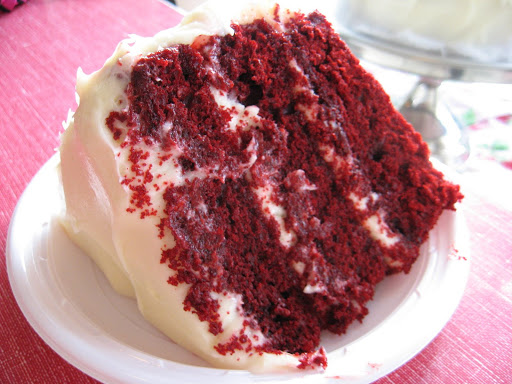 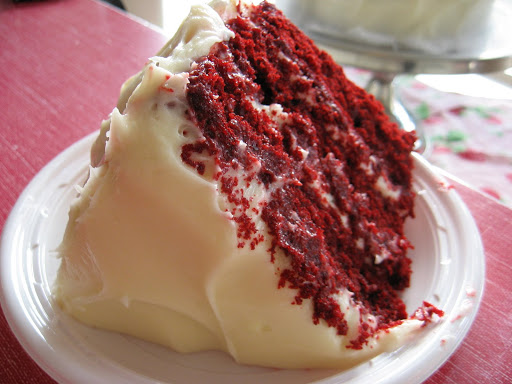 The Red Velvet’s taste is enjoyable, but not as compelling as its appearance. The cake is very moist, if somewhat flavorless. While the batter contains cocoa powder, the cake is not exactly chocolaty. The cake’s gorgeous red color takes center stage, which is fine by me because I adore rich tones. The cream cheese frosting is ridiculously decadent and makes up for the flavor and sweetness lacking in the cake. The frosting is piled on generously, so palate fatigue is inevitable. The Astronomer and I each had a few bites and had the rest packed up to-go. I finally finished the cake after two more sittings over the next two days.

So Naughty, So Nice

IT’S a cake that can stop traffic. The layers are an improbable red that can vary from a fluorescent pink to a dark ruddy mahogany. The color, often enhanced by buckets of food coloring, becomes even more eye-catching set against clouds of snowy icing, like a slash of glossy lipstick framed by platinum blond curls. Even the name has a vampy allure: red velvet.

”It’s the Dolly Parton of cakes: a little bit tacky, but you love her,” said Angie Mosier, a food writer in Atlanta and a board member of the Southern Foodways Alliance at the University of Mississippi in Oxford.

But no matter how you slice it — or bake it — red velvet cake is suddenly all the rage. Every new bakery seems to sell a version. Established ones are adding the cake to their repertory, and those that have always made it are hard pressed to keep up with the demand. In New York City, more than 20 bakeries now sell red velvet cake or cupcakes, threatening to end the long reign of the city’s traditional favorites, cheese cake and dark chocolate blackout.

”Red velvet is beautiful and fun,” said Amy Scherber, the owner of Amy’s Bread. ”I started making it five or six years ago, and at that time you couldn’t get it in many places besides Magnolia. Now it’s very popular.” Magnolia, the Greenwich Village bakery, specializes in Southern baked goods, and red velvet has been its most popular cake from the day it opened about 10 years ago. Since then, Magnolia has inspired a variety of spinoffs and imitators, and they all do a heavy traffic in red velvet.

Some bakers and food historians attribute the cake’s rise in popularity to its role in the 1989 film ”Steel Magnolias,” where it appeared in the shape of an armadillo, with gray icing. The cake, if not the armadillo, had staying power.

More recently, the cake scored a public-relations coup of sorts when the singer Jessica Simpson served a towering hexagonal version at her wedding to Nick Lachey in 2002. It was made by Sam Godfrey, owner of the bakery Perfect Endings in Napa, Calif., who said he included a red velvet sample among the cakes he gave Ms. Simpson ”because she’s from Texas.” He wasn’t prepared for her reaction. ”When she chose it I was dumbstruck,” he said. ”Then she talked about it all over television.”

But is this American oddity more than just a pretty face? To find out, the Dining section recently conducted a tasting of red velvet cakes that were either baked in New York City or are available by mail order. Many were disappointingly bland, but two won unanimous approval.

The best were moist and tender, not too sweet, like yellow cake with an extra wink of flavor. The layers were in harmony with an alluringly rich fluff of soft cream-cheese or butter-cream icing, not a gummy or sugary plaster. The winning cakes and cupcakes did not taste strongly of chocolate, an essential ingredient, some say, in the classic version of the cake. But cocoa had a noticeable presence in them.

Though the consensus is that red velvet, like many layer cakes, is from the South, it is certainly not in every cookbook about Southern food. No definitive information exists on exactly where it came from, how it should be made or why it is red. In fact, red velvet cake has produced almost as many theories and controversies as recipes.

One early story links it to New York. In their new ”Waldorf-Astoria Cookbook” (Bulfinch Press, 2006), John Doherty and John Harrisson say that the cake, which they call a Southern dessert, became a signature at the hotel in the 1920s. (It is also the subject of an urban legend: a woman at the Waldorf was supposedly so taken with it that she asked for the recipe — for which she was charged $100 or more. In revenge, she passed it along to everyone she knew. The tale, like a similar one about a cookie recipe from Neiman Marcus, has been debunked.)

Mr. Doherty, the Waldorf’s executive chef, said the hotel still gets many requests for red velvet, so it is offered on the room service menu and in Oscar’s American Brasserie. ”It’s not my favorite cake,” he said. ”I can’t bear the thought of all that food coloring.” He uses beets in his version.

Some other chefs, including Adam Perry Lang of Daisy May’s BBQ USA, are also as unlikely to pour food coloring into a batter as to put maraschino cherries on a baked ham. Mr. Lang worked on his recipe with Johnny Iuzzini, the pastry chef at Jean Georges, and came up with a cake that was rated one of the best in the Dining section’s blind tasting. He also uses beets, but with redder results than Mr. Doherty.

Perfect Endings bakes the excellent red velvet cake that Williams-Sonoma featured in its catalog for the first time at Christmas. Mr. Godfrey said he uses a recipe he learned to bake with his grandmother, a native of Little Rock, Ark. ”But for the bakery I couldn’t bring myself to offer a cake using red food coloring,” he said. ”I tried cherries and beets, but it wasn’t right. Then I decided to honor my grandmother, so I went ahead with the food coloring.”

Carl S. Redding, who serves red velvet cake at Amy Ruth’s, his restaurant in Harlem, said that many places do not make it properly. ”There are people who just dump red food coloring into a yellow cake batter, but it has to have cocoa,” he said.

Craig Claiborne, a Mississippi native who was a food editor and restaurant critic for The New York Times, included a red velvet recipe with no cocoa in ”Craig Claiborne’s Southern Cooking” (Times Books, 1987). But to most authorities, some cocoa is essential.

Combined with some other traditional layer cake ingredients, cocoa takes on a red tinge. As Harold McGee, the author of two books on the science of cooking and a columnist for the Dining section, explained, cocoa contains anthocyanin, a red pigment found in foods like red cabbage. ”When you cook foods like this with acid, the more red these pigments look,” he said. ”Red cabbage stays redder and will not turn blue if there is vinegar in the cooking water.”

In cakes, an acid like buttermilk or vinegar may be used to activate baking soda, a common leavening. The reddish tint produced by the acid and the cocoa might explain why some chocolate cakes are called devil’s food, a theory that was held by James Beard. Home bakers in the South may have decided to exaggerate cocoa’s natural hue with food coloring and — Eureka! — they had red velvet.

Another theory is that home cooks started adding red food coloring after Dutch process cocoa became widely used. (The Dutch process makes cocoa easier to dissolve by adding an alkalizing agent like potassium carbonate, decreasing the acidity in the batter and muting the redness.)

Most recipes for red velvet cake call for cocoa in amounts ranging from an insignificant teaspoon to a serious half-cup, like the one by Elisa Strauss, who bakes cakes to order on the Upper West Side and whose ”Confetti Cakes Cookbook” is to be published this spring by Little, Brown.

The more cocoa in the cake, the more red food coloring is needed to override the brown. But home bakers should be aware that using a lot of red food coloring, as in the unapologetic amount in the recipe given here, carries the risk of thoroughly spattering the kitchen. And there is a limit to how much cocoa can be used effectively.

”The cake is neither chocolate nor vanilla,” said Lisa Hall, an owner of Kitchenette, a cafe and bakery that makes red velvet cakes and cupcakes at its locations in TriBeCa and on the Upper West Side. ”It’s Southern and moist and comfort food. People love it, and I don’t understand why.”

Reds That Give a Glow:

REPORTERS and editors from the Dining section held a blind tasting of red velvet cakes from 19 bakeries and takeout shops. All liked the cakes from these two places:

A majority of tasters also liked these:

Not included in the blind tasting but well liked was the cake from WILLIAMS-SONOMA ($65 from 800-541-2233 or williams-sonoma.com), which also sells excellent red velvet cupcake mix ($14) in its stores.

Adapted from ”The Confetti Cakes Cookbook” by Elisa Strauss (Little, Brown, to be published in May)

Adapted from ”The Waldorf-Astoria Cookbook,” by John Doherty with John Harrisson (Bulfinch, 2006)

Yield: Icing for top and sides of 3-layer cake.

Correction: February 21, 2007, Wednesday An article last Wednesday about red velvet cake referred incorrectly to a recipe for the cake in ”Craig Claiborne’s Southern Cooking” (Times Books, 1987). The recipe contained cocoa, it was not cocoa-free.