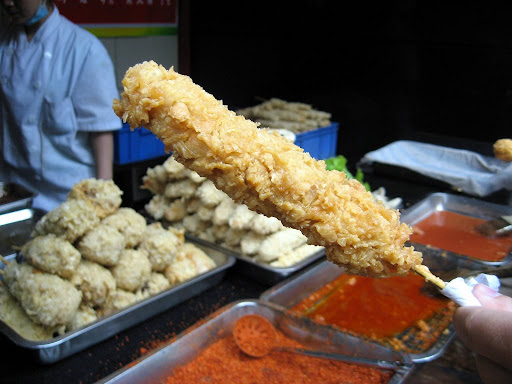 Another day, another meat on a stick! This one was an elongated panko crusted chicken nugget (3 RMB). The Astronomer painted the top half with a Tabasco-like sauce and the bottom half with a different one, but once the sauces soaked in the whole thing tasted pretty much the same. It could have passed for a classic American chicken finger, which wasn’t necessarily a bad thing, but it did feel like a bit of a waste of space given all the goodness available down the road. 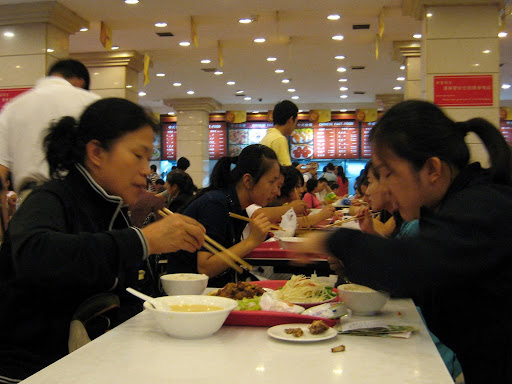 While traveling through China, The Astronomer and I can’t help but to stay up late and wake up even later. As a result of our slothful schedule, we’re always cramming breakfast and lunch into one huge meal. This was definitely the case today. For the breakfast portion of our meal, we paid the Wuyi Fandian food court (351 Dong Da Jie Street) another visit. 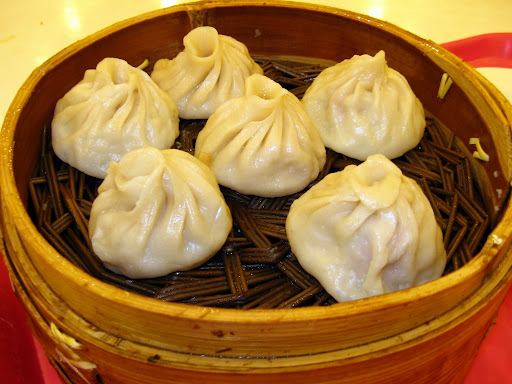 This time we went with steamed dumplings filled with pork and ginger (8 RMB). Similar to the pan-fried ones, the wrappers were thick and doughy and the meat was well-seasoned. 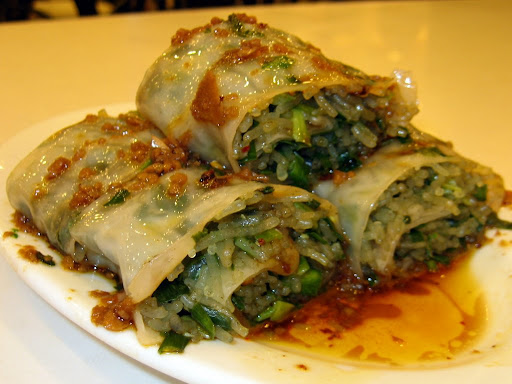 We supplemented the dumplings with seared rice rolls stuffed with firm glass noodles, scallions and greenery (6 RMB). The rolls were doused in a chili oil sauce that contained a bit of vinegar, which contrasted well with the salty dumplings. I’d usually feel really gross eating these types of foods for breakfast, but since it was way past noon, it felt just right. 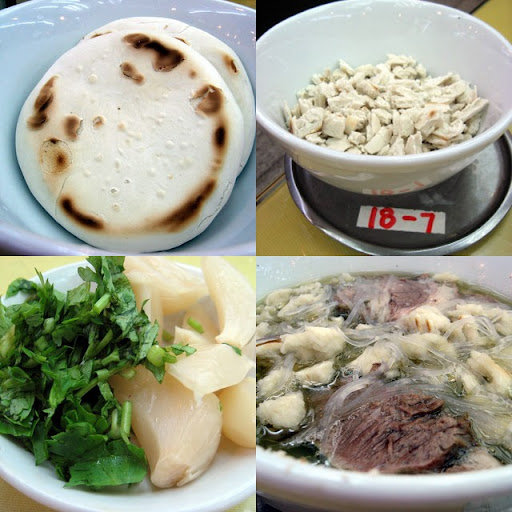 Lunch immediately followed breakfast. Yangrou Paomo (20 RMB) is a Xi’an specialty that consists of glass noodles and wheat flour flat bread served in a mutton soup. After placing our order, one of the many waitresses brought us a large bowl with two pieces of flat bread inside. Taking a cue from our fellow diners, we broke the bread into small pieces by hand. We also ate some during the laborious process—the tasted and texture reminded me a bit of plain bagels. After we had crumbled our bread into bits, the waitress took the bowl back to the kitchen (atop a metal plate with our table number on it), and added the broth, meat and noodles.

We ate the Yangrou Paomo with pickled garlic cloves and a sprinkling of cilantro. The flavorful broth engorged the bread bits, making them the highlight of the dish. The pieces of lamb were so tender and paired well with the garlic cloves. The lamb and garlic combo reminded me of my grandpa’s Christmas spread. 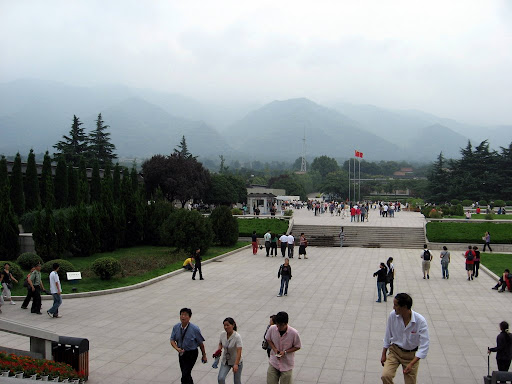 After brunch, we hopped a bus to see the famous terracotta warriors.

The Terracotta Army is a form of funerary art buried with the Emperor of Qin (Qin Shi Huang) in 209-210 BC (his reign over Qin was from 247 BC to 221 BC and unified China from 221 BC to the end of his life in 210 BC). Their purpose was to help rule another empire with Shi Huang Di in the afterlife. Consequently, they are also sometimes referred to as “Qin’s Armies.”

The Terracotta Warriors were discovered in March 1974 by local farmers drilling a water well to the east of Lishan (Mount Li). Mount Li is also where the material to make the terracotta warriors originated. 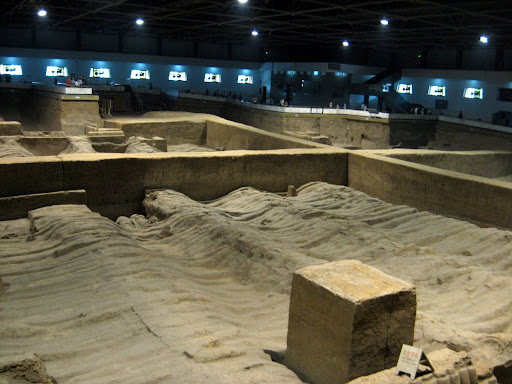 The terracotta warrior complex is an active archaeological site comprised of three “pits.” This is Pit 2. Each pit is encased with four walls and a roof to protect it from the elements. While the archaeologists have uncovered thousands of soldiers, there’s still lots more that have yet to be unearthed. 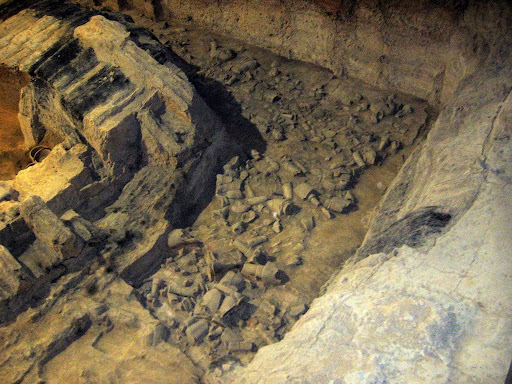 These are what the soldiers look like when archaeologists find them—heads in one place, bodies in another. This is because the tomb was pillaged a few short years after the soldiers were tucked away. 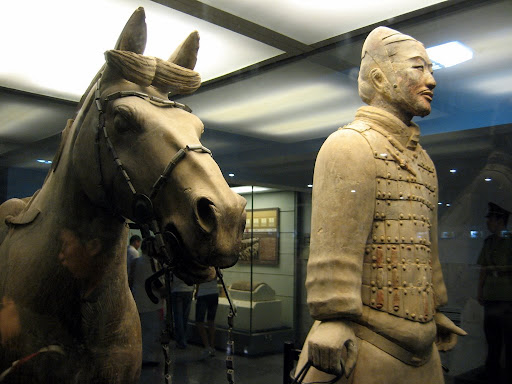 A handful of soldiers and horses are placed in glass cases for visitors to observe up close. 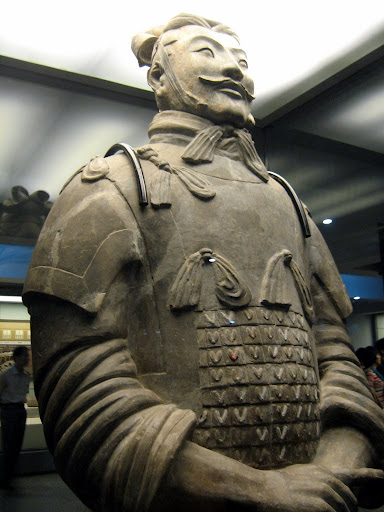 Obviously, the inspiration for V—as in for Vendetta. 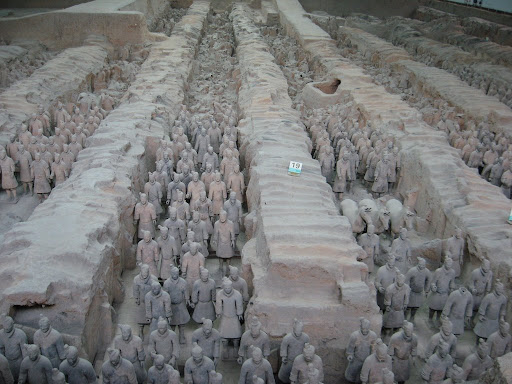 Pit 1—“230 meters long, contains the main army, estimated at 6000 figures. Pit 1 has 11 corridors, most of which are over 3 meters wide, and is paved with small bricks with a wooden ceiling supported by large beams and posts.” 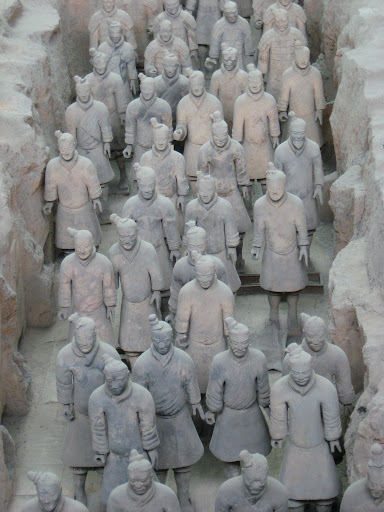 “The terracotta figures were manufactured both in workshops by government laborers and also by local craftsmen. The head, arms, legs and torsos were created separately and then assembled. Studies show that eight face molds were most likely used and then the clay was added to give them individual facial features. Once assembled the intricate features such as facial expressions were added.” 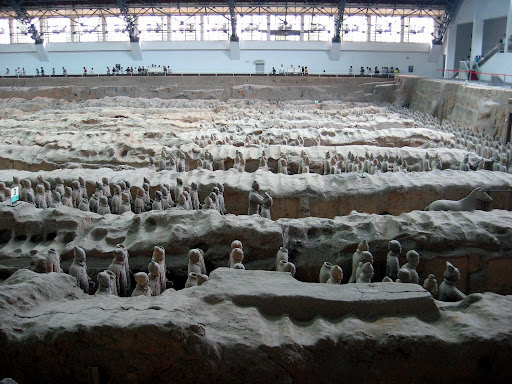 “The terracotta figures are life-like and life-sized. They vary in height, uniform and hairstyle in accordance with rank. The colored lacquer finish, individual facial features, and replica weapons and armor used in manufacturing these figures created a realistic appearance.”

After our terracotta excursion, The Astronomer and I went running and then grabbed a quick bite at a happening street. 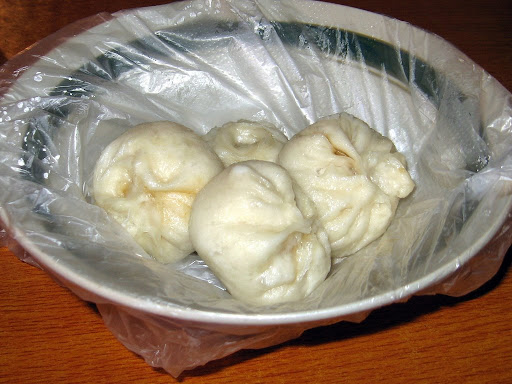 We started off with four dumplings (1.5 RMB). These dumplings were breadier than the ones we ate earlier in the day and contained less meat—they were still fabulous though! All of the vendors on this especially lively street wrapped their bowls and plates with plastic bags. 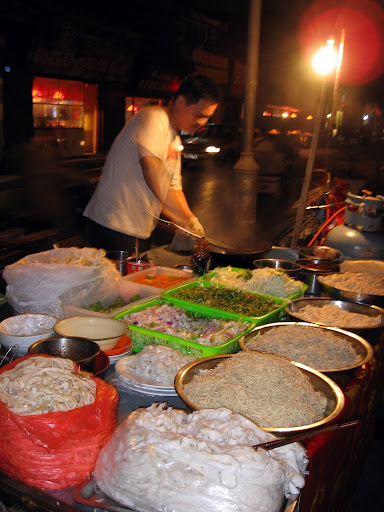 For our main entrees, we visited this skillful wok-er. He had five different types of noodles to choose from! 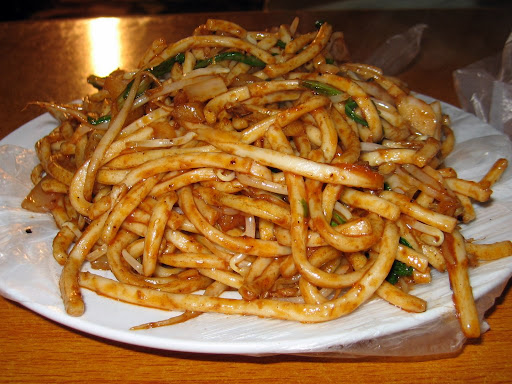 We chose the type of noodle and left the rest up to the chef. These thick and rounded noodles (3.5 RMB) tasted a bit like ketchup and left our tongues tingling—too much MSG, maybe? It was the strangest sensation! But a little (or a lot) MSG couldn’t keep us from downing them because they were quite good. 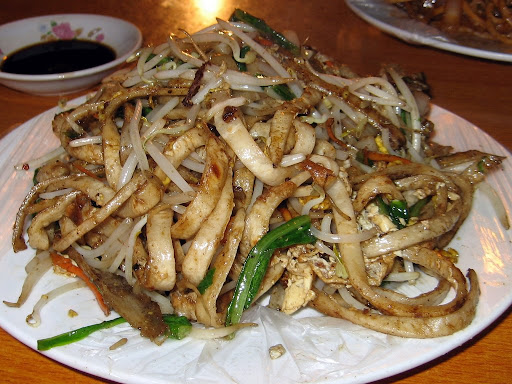 These flat and wide rice noodles (3.5 RMB) were stir-fried to a gorgeous crisp and contained bean sprouts and egg. A solid plate of goodness! After dinner we rushed back to the hotel to watch Usain Bolt break the world record in the 100M dash.

6 thoughts on “Eating in Xi’an II”