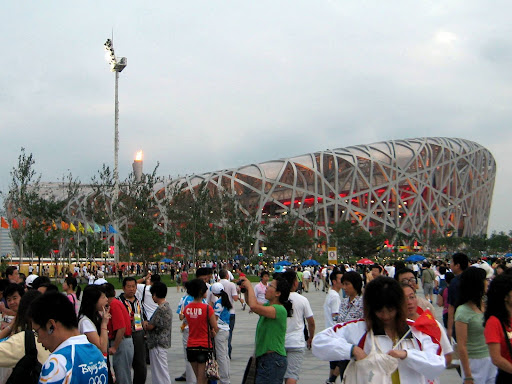 We arrived in Beijing on Sunday—in time for the third day of Olympic Track and Field competition. After dropping off our luggage in the hotel, grabbing a quick bite, picking up our tickets and getting in a short run, we headed to the National Olympic Stadium. The venue is also known as the Bird’s Nest for its structural appearance and symbolic cradling of the world’s dreams. 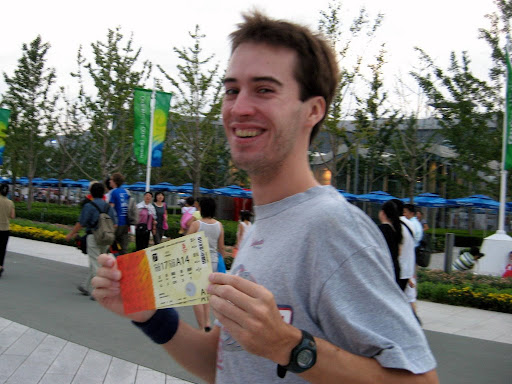 As a serious runner and all around huge fan of international distance running, The Astronomer was STOKED to the bone about seeing world class runners doing what they do best. He was especially excited to see America’s Bernard Lagat in the 1,500 meter semifinals. 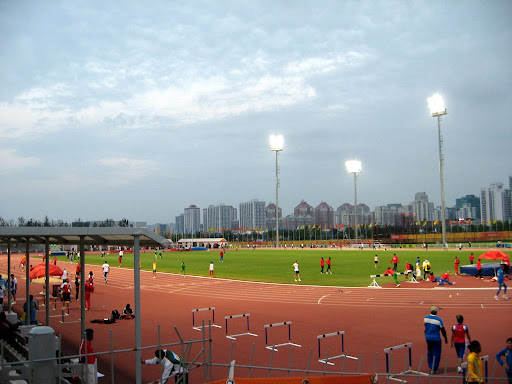 As we walked toward the stadium, we saw a bunch of people peeking over a fenced-off area. Curious as to what the commotion was all about, we took a look too. The blocked area turned out to be the athlete’s warm-up facilities! The Astronomer grabbed my camera and started snapping away like a seasoned paparazzo. 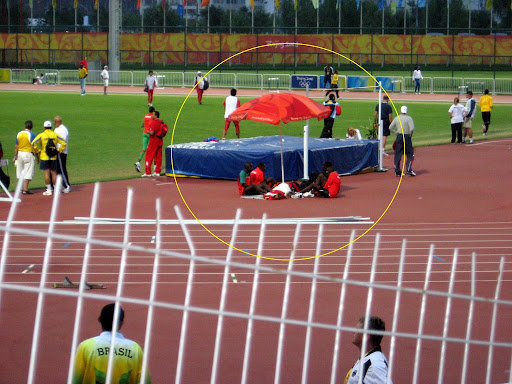 The Astronomer searched the area for American distance runners, but only spotted a group of Kenyans stretching. I’d never seen the boy so star struck before. 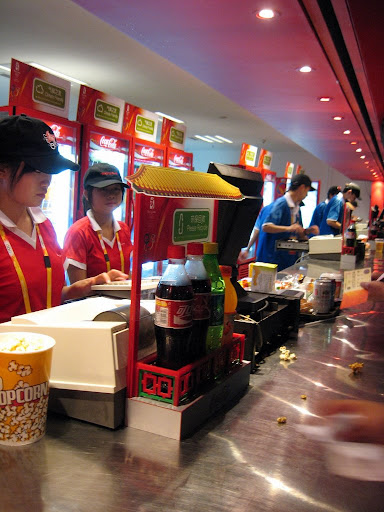 The first thing we accomplished upon entering the stadium was grabbing dinner. Since we were hungry as heck and didn’t want to miss any of the action on the track or field, we bought a lot of food. The concession stand had a good variety of snacks, but nothing that qualified as a decent meal. In certain rare situations, volume must take precedence over taste. 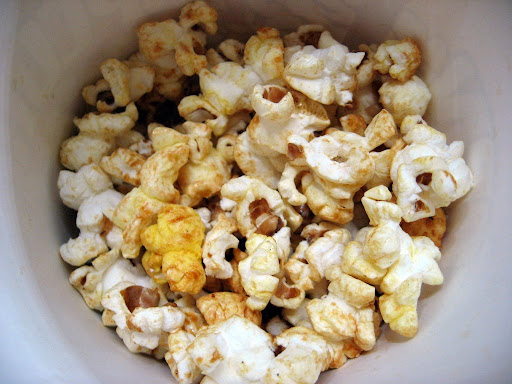 The popcorn (10 RMB) was 89 percent buttered and 11 percent caramel coated. The Astronomer and I were drawn in by fragrant fumes emanating from the popper. From the look of things, this may be the Games’ top selling item. 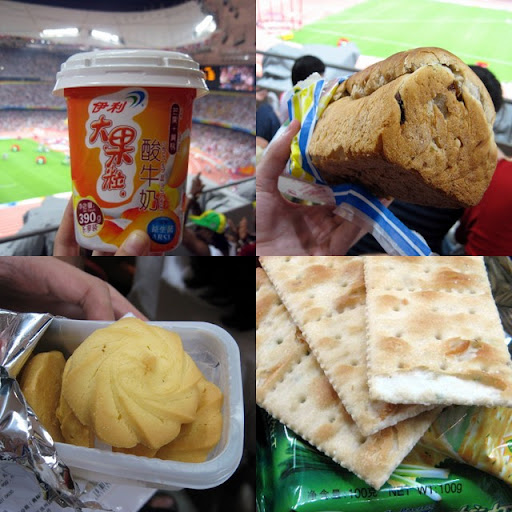 To round out our meal, we procured some yogurt with peaches and mangoes, bread with dried fruit, butter cookies and crackers with “scallion” flavoring. Dinner set us back 40 RMB—cheap compared to the price of stadium food in America, but pricey compared to our previous dinners in China. 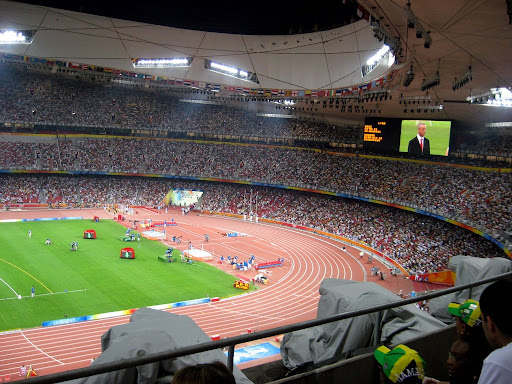 Here’s the view from our seats. The stands were packed and the crowds were in good spirits. The Chinese government did a great job training their constituents how to cheer and do The Wave. Our seats were near some Jamican fans—it was a huge night for Jamaican track. 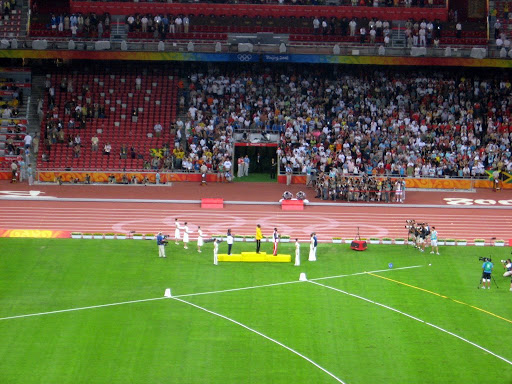 The action on the field was far more exciting than the stadium snacks. Here’s Usain Bolt picking up his gold medal for his record breaking 100 meter performance the night before. 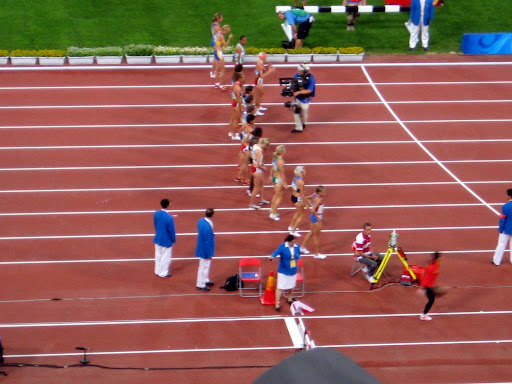 Here are the 3,000 meter steeple chasers lining up at the start. “With a dominating gun-to-tape performance, Gulnara Galkina-Samitova captured the event’s first Olympic gold medal with an 8:58.81 World record, while smashing through the nine-minute barrier in the process.” Galkina-Samitova’s stride was unbelievably smooth as she jumped the hurdles and over the water pit—it gave me chills. 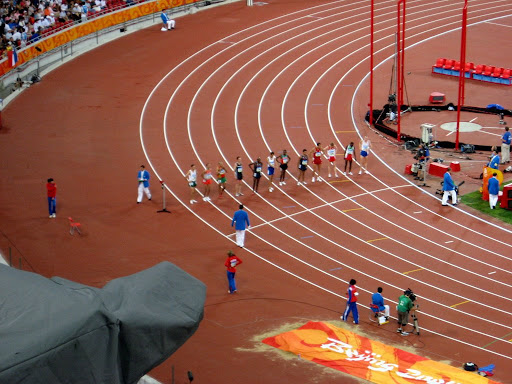 Here are the 1,500 men lining up for the second heat. Although The Astronomer was cheering his heart out for Bernard Lagat, America’s premier middle distance runner missed out on the finals by .02 seconds. 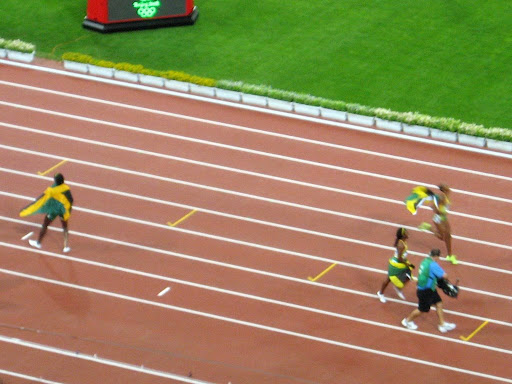 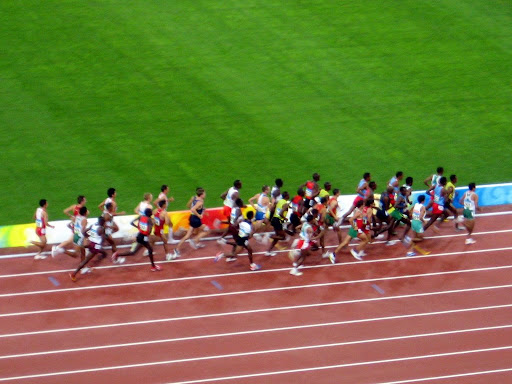 The last race of the evening was the men’s 10K. The runners started off in a pack, but at 6,800 meters, 2004 bronze medalist Zersenay Tadese took over with a real move to break up the pack. As the race wore on, some runners got lapped by the leaders! Man, how embarrassing. Thank god that never happened to me in high school or college. I would have died. Ethiopia’s Kenenisa Bekele won the race in 27:01.17, setting a new Olympic record! Woot!

In addition to the track events, we also saw men’s hammer throwing, preliminary men’s high jumping and women’s triple jump. Nina recently asked me if it’s hard to watch track and field live because there’s so much going on at once. The answer? Not so much because it’s easy to focus on one event. Also, the big screens and announcers (Chinese and English) draw the crowd’s attention to specific events. 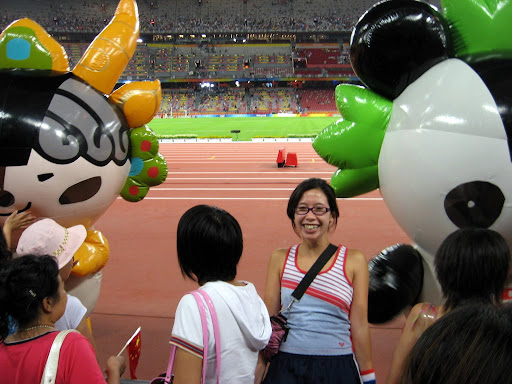 At the end of the meet, the Fuwas came out to play! Here I am happily posing in between Yingying and Nini. The Olympic spirit turns me into a giggly school girl. 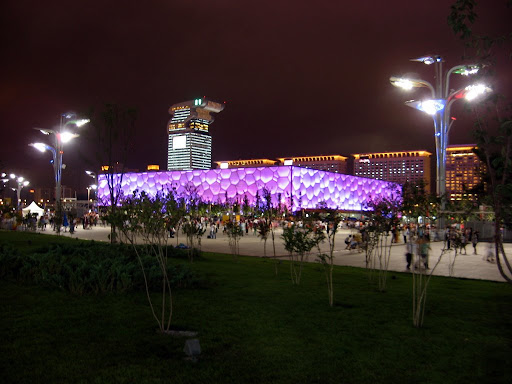 The Bird’s Nest is located next to the Aquatics Center, which according to the official spectator’s guide, “sparkles, glows, and the iridescent bubbles on its outer walls are unforgettable.” 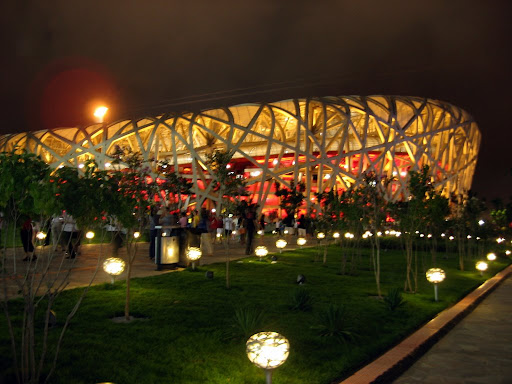 One last look at the visually arresting Bird’s Nest.

5 thoughts on “Track 'n' Snacks in the Bird's Nest”