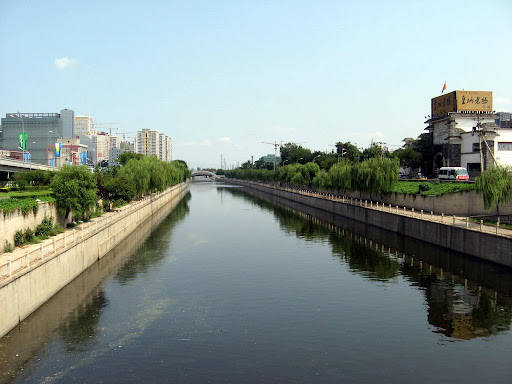 We woke up to sunny skies on our first full day in Beijing. The visibility here is much better than in Xi’an, but we both woke up with sore throats, which meant that the air quality is probably worse. Here’s a view of the Tonghui River, where The Astronomer and I are getting in some Olympic-inspired mileage. I run so much faster after watching an intense track race on television.

Whereas our time in Kunming and Xi’an was mostly spent eating, our days in Beijing revolve around athletic competition, so exploring new eats is taking a backseat for a couple of days. Today, we had tickets for the first session of group B men’s preliminary basketball. 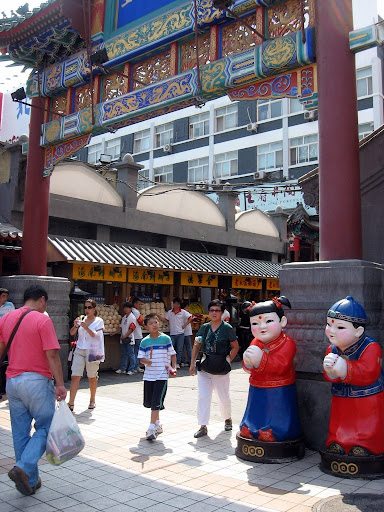 Before making our way to Beijing Olympic Basketball Gymnasium, we stopped by Wangfujing Snack Street, the city’s only pedestrian thoroughfare. We’d heard from a number of trusty sources that this was the place to check out for classic Chinese snacks. Vendors were selling the usual meat on a stick, but we were looking for something more substantial so we ducked into a restaurant. 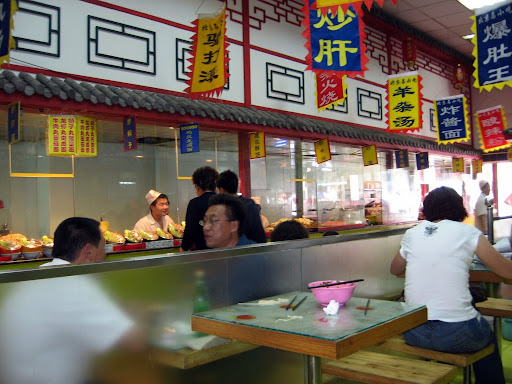 We picked this restaurant because it was kinda dark, a little dingy and filled with Chinese people. 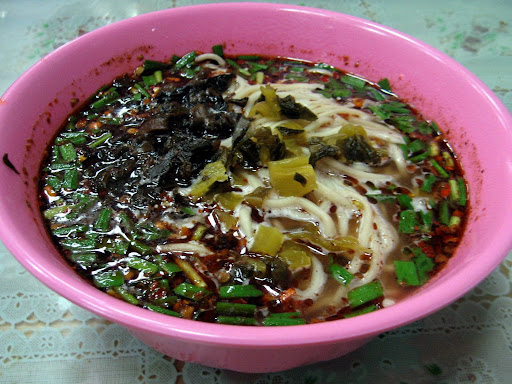 I got a bowl of noodles in a spicy broth (10 RMB)—been there, done that. Prices along Wangfujing are twice as much as what we’ve been paying elsewhere, and the amount of love put into each dish is dramatically less. 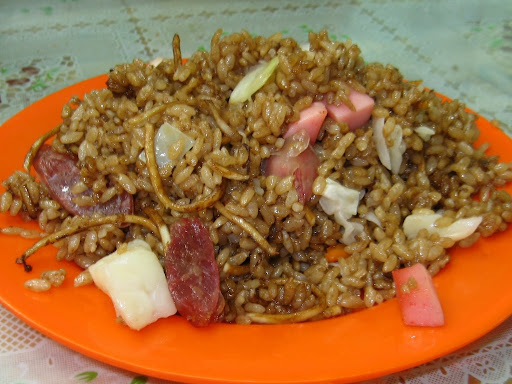 The Astronomer chose a plate of fried rice with bits of Chinese sausage, ham and cabbage (15 RMB). It was edible, but we weren’t the least bit impressed. 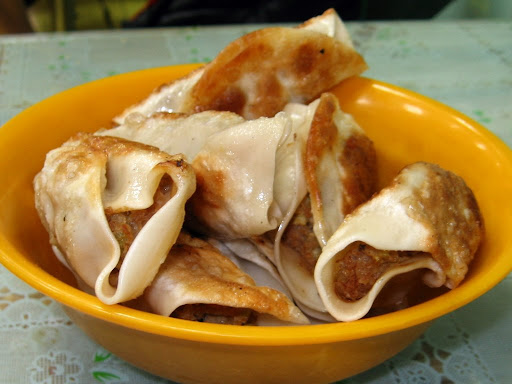 Lastly, we shared some fried dumplings (15 RMB). The filling was mostly cabbage, and the wrappers’ texture was too chewy. Man, we totally got duped by Wangfujing Snack Street. Don’t make the same mistake—it’s a high price, low quality tourist trap. 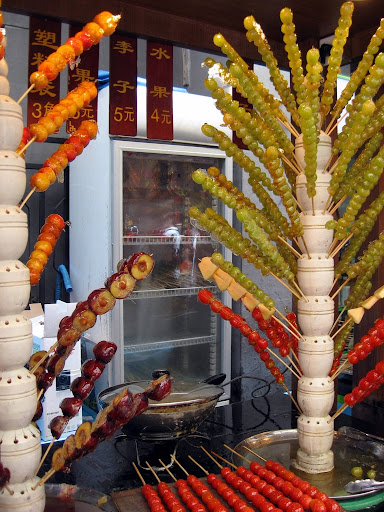 For dessert, The Astronomer and I shared some candy coated fruit to wash away the taste and memory of our dangerously mediocre lunch. We’d seen similar preparations in Xi’an, but never got a chance to give it a go. The vendor offered candy coated grapes, plums, crab apples and pineapples. 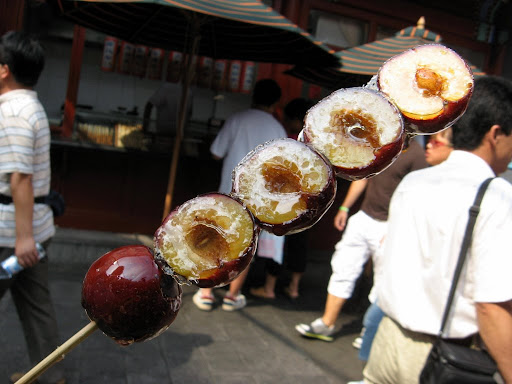 We went for a stick of plums (5 RMB). We were both surprised that they were so juicy—the candying process adds a crunchy coating of sugar around the fruit but doesn’t diminish its natural goodness. The tart plums paired with the sugary candy were very delicious. Not a bad way to get in a couple servings of fruit! 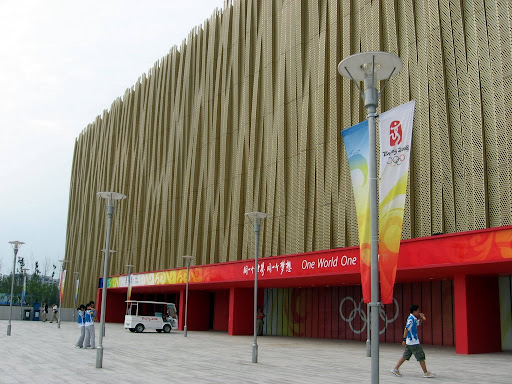 After lunch, we headed to the Wukesong Culture and Sports Center to catch some basketball action. Beijing is a sprawling metropolis, so it takes a good hour to get from our hotel to any of the venues. According to the Official Spectator Guide, the “outer facade [of the Beijing Olympic Basketball Gymnasium] is decked by a line of saw-toothed aluminum foil flashing brilliantly in the sun.” Couldn’t have said it any better myself. 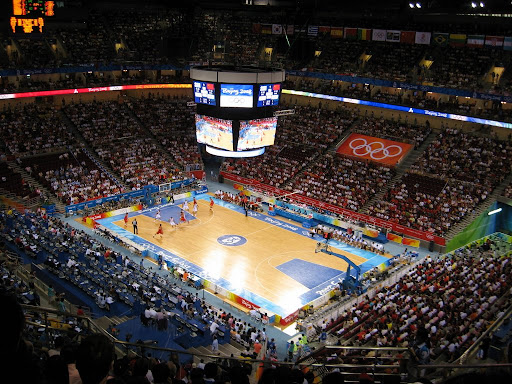 For the first match—China vs. Greece—we sat in Nosebleed City. 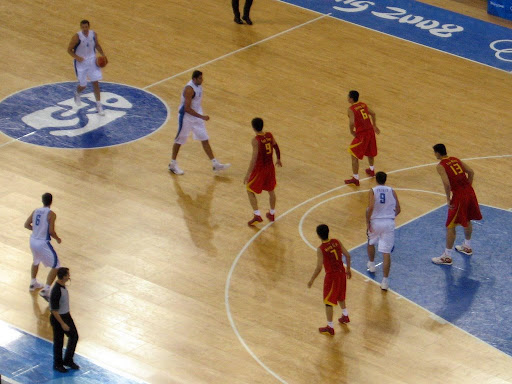 The Greeks were so good that even Yao Ming (#13) couldn’t keep Team China afloat. 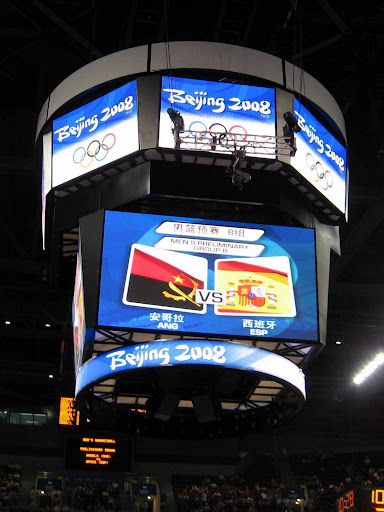 For the second match up of the afternoon—Angola vs. Spain—we moved court side. Woot! 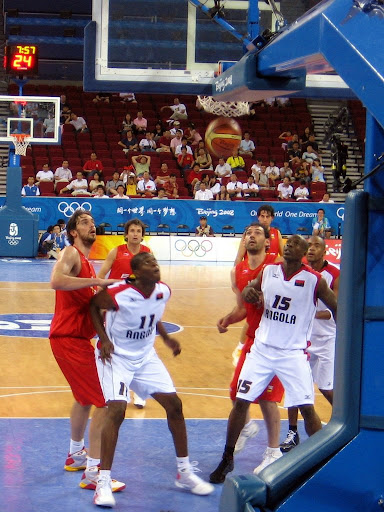 Angola was definitely in the game for the first 17 minutes, but by half-time, it was clear that things weren’t going to be pretty. Spain’s Pau Gasol was a dominating force. 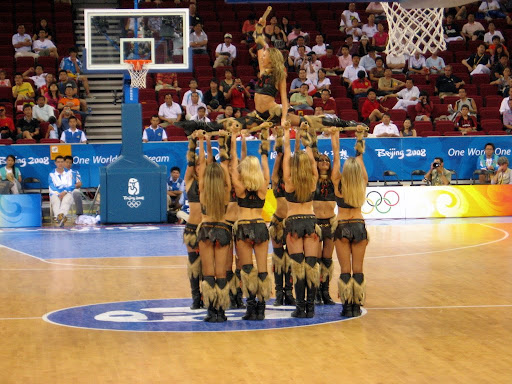 And lastly, some eye candy—the Beijing Spirit Dancers. No, I have know idea what they’re doing, but at least they look good doing it. Mao probably turned in his mausoleum after this scandalous performance.

After leaving the arena, we tried to trade our two sets of table tennis tickets for a pair of seats at the USA vs. Germany basketball game later that evening.  The Chinese love ping pong; however, they were all trying to cash in on the Olympic fervor, so we were unsuccessful.  One woman quoted us a price of 6,000 RMB. Crazy lady, we don’t like Kobe that much.

6 thoughts on “B-Ballin’ in Beijing”