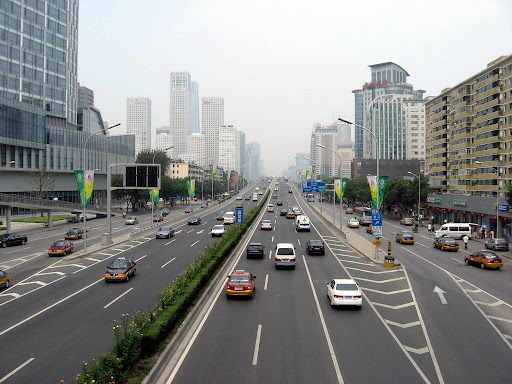 Chaoyang is the name of the section of Beijing The Astronomer and I are residing in during our week long stay in the city. It’s a fairly modern business and residential neighborhood located around East Third Ring Road. With so much traffic and new developments in this part of town, its been a bit tough searching for delicious and cheap local-style eats. After a bit of sleuthing about (back alleys are definitely where it’s at), we’ve found three go-to places to fuel up in between catching sporting events and site seeing. 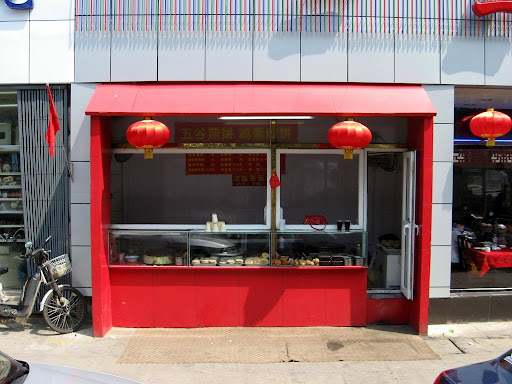 This nameless counter is located smack on Third Ring Road. The menu is completely in Chinese, but the goods are laid out front so it’s difficult to go wrong. 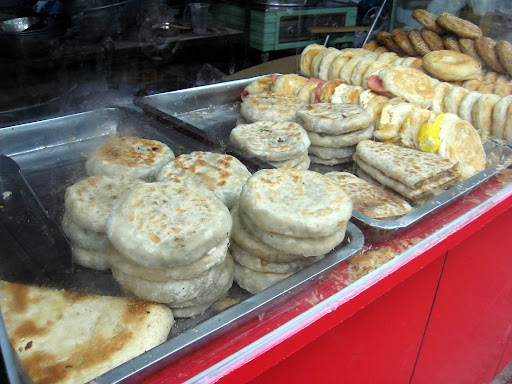 The specialty here is bread products sold plain or stuffed with vegetables, meat or eggs. Products are made in house several times a day to keep the inventory fresh. The triangular bread on the far left tasted similar to foccacia, while the cabbage-stuffed round ones were just savory enough to hit the spot. 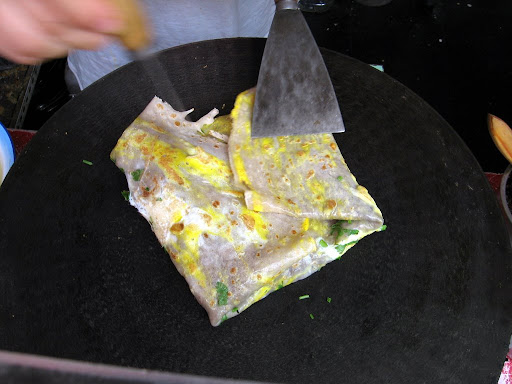 The bread counter also sells jianbing (4 RMB)—a thin crepe topped with egg, brushed with hoisin sauce and filled with scallions and fried wonton crisps. Each crepe is made to order on a large circular hot plate and served neatly folded up in a plastic bag. 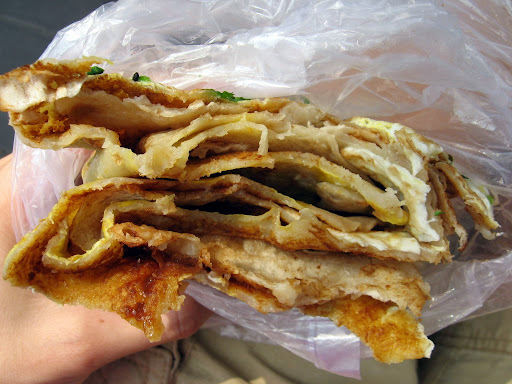 Check out all the lovely crepe layers! I asked for two eggs (since that’s what the locals who were served before me got) and I was stuffed to the gills when finished. If you’re down with carbohydrates like I am, jianbing is a must-try Beijing favorite. 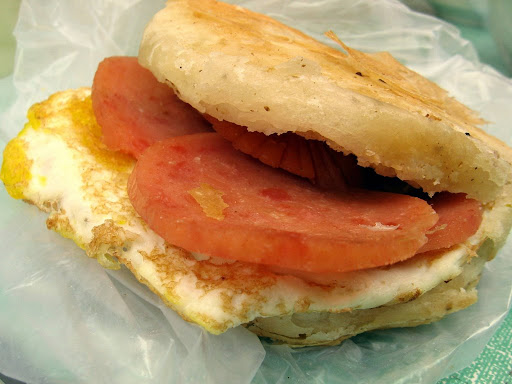 This one is sort of like an Egg McMuffin, but way better (3 RMB). The bread is a touch salty, while the texture is a cross between a buttery biscuit and a flaky croissant. The “meat” slices are nowhere near as delicious as a good ol’ American sausage patty, so I’ve been ordering my McMuffin without these days for just 2 RMB. 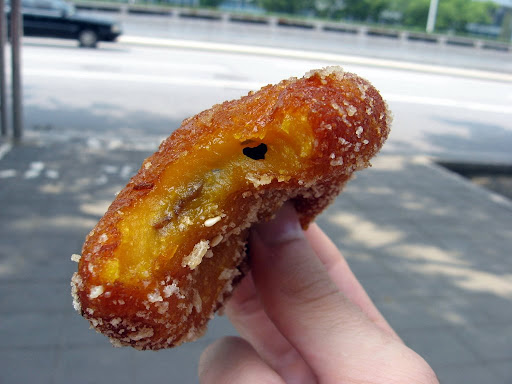 The Astronomer picked up this sticky doughnut filled with sweet red bean paste and coated in sugar (1 RMB). Admittedly a bit oily and heavy, but the fabulous tapioca texture made up for it. 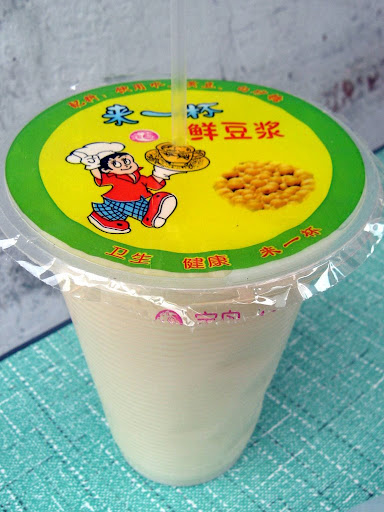 Nothing washes down a bread-intensive breakfast quite like fresh soy milk (1 RMB). Hot or cold, I find it so refreshing. 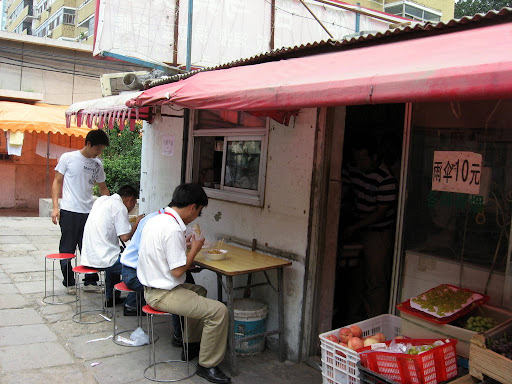 Our second favorite Chaoyang eatery is this nameless window dishing up noodles morning, noon and night. Patrons place their order at the window, and a few minutes later the food is delivered from the same window. Magic! Since The Astronomer and I aren’t fluent in Mandarin yet, we’ve been pointing at other diners’ food and smiling to indicate what we’d like to eat. Not the classiest move, but you’ve gotta do what you’ve gotta do. 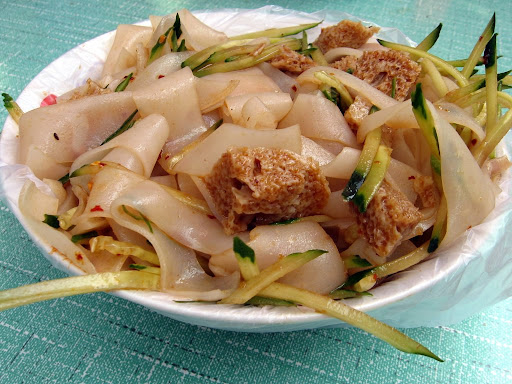 Flat and wide rice noodles served cold with cucumbers, cubes of bread and a sauce of chili, garlic and vinegar (3.5 RMB). The cubes of bread soak up the tart dressing without getting mushy. 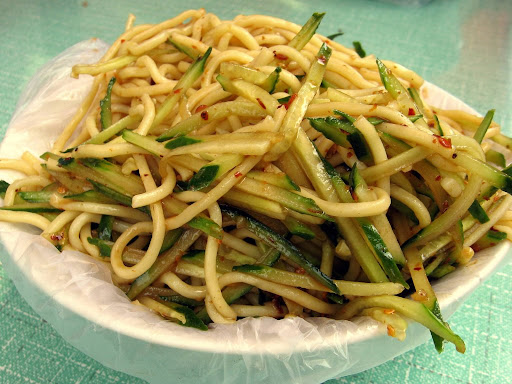 A similar cold noodle dish using round egg noodles and without bread cubes (3.5 RMB). The dressing here is similar in composition but a lot less spicy. 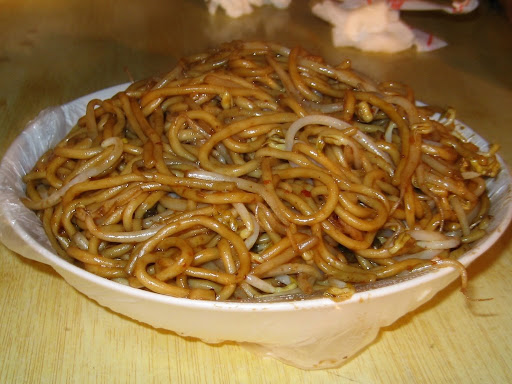 In addition to cold noodles, the chefs also make chow mein. Of all the foods I’ve eaten in China, this dish is the most reminiscent of Chinese food in America. It totally looks just like the stuff at Panda Express! 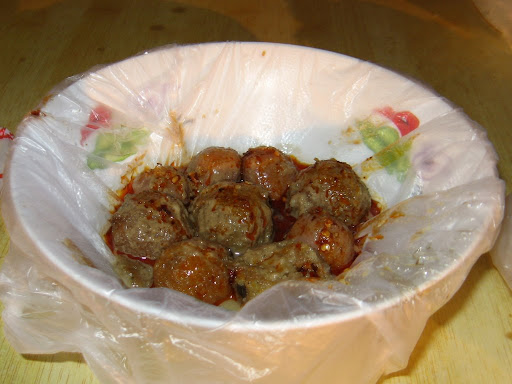 At night, the chefs whip up meat and veggies on a stick in addition to noodles. The Astronomer thought he was getting fish balls, but this turned out to be some sort of mystery meat that collapsed a bit too easily in our mouths. 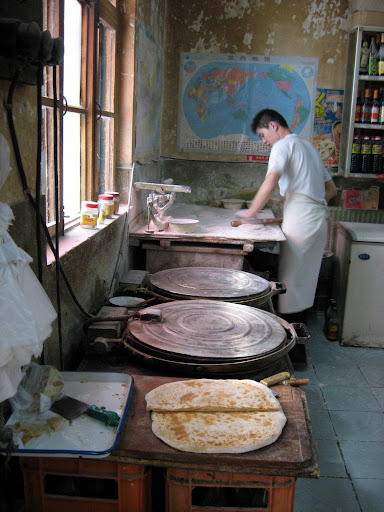 And last but certainly not least, the Chinese flat bread (bing) dealer. We were enjoying some cold noodles from our favorite window the other day when we saw some locals noshing on flat bread. We tried to order some at the window, but they directed us to go around a nearby corner for the goods. 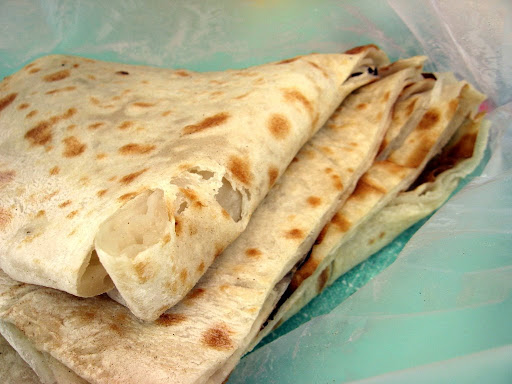 Bing is cross between Indian roti and Mexican tortillas. However, while roti and tortillas require some sort of filling, bing has the slightest hint of salt that makes it pleasurable to eat plain. A single portion, which is humongous, by the way, costs 3 RMB. Served hot, it’s impossible to eat just one slice.

Who knew Chinese food was so bread intensive?

8 thoughts on “Eating in Chaoyang”