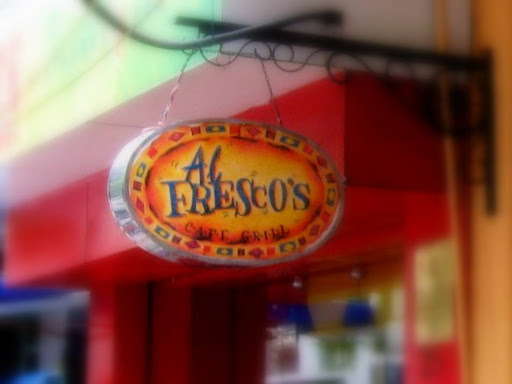 Al Fresco’s Café & Grill is a Saigon institution, at least among the expat crowd. I know this because my colleague Mimi, the quintessential expat, orders their barbeque spare ribs for lunch two or three times per week. Unbelievably, The Gastronomer and I made it through an entire year in Saigon without trying those puppies for ourselves. However, on our 368th day in town, and my last day at the East Meets West Foundation, my co-workers offered to take me out for a farewell lunch. They kindly let me choose the location, but at the last minute plans were changed (something about a meeting near the Sheraton) and we ended up eating at Al Fresco’s. I decided to go with the flow; after all, I like meat, and it seemed only right after eating at Pepperonis that I sample the cuisine at its slightly more upscale cousin. The Aussie-owned Al Fresco’s offers a mix of American, Italian, and Australian food, with a few wild cards thrown in. On this day, two of my co-workers ordered Mexican taco salads. They didn’t look very appetizing. I went for the ribs, of course. There were four portion sizes to choose from—Pygmy, Junior, Mini, and a fourth slightly less puny-sounding term that I can’t remember. I wasn’t feeling up to eating a whole slab of ribs, so I swallowed my pride and ordered the Mini (180,000 VND). 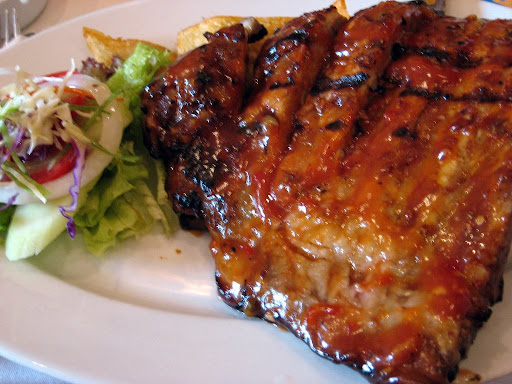 It turned out to be pretty damned large. I figured finishing off a half rack would be no problem; after all, as a gangly high schooler in Alabama I polished off full racks in one sitting on several occasions. However, these ribs were longer than the ones I’m used to (the meat’s imported—they certainly don’t have pigs like this here), and after living in Vietnam for some time, I’m not used to consuming large quantities of meat straight up. By the end of the meal I was feeling a little queasy.

I wasn’t really expecting much from these ribs. However, I found myself pleasantly surprised. The meat was awesome—really freaking fall-off-the-bone tender. The sauce certainly wasn’t classic vinegar-based Alabama style BBQ sauce, or Texas style or North Carolina style or any other recipe from the southern United States for that matter. More than anything, it tasted like pure ketchup. That may sound like a bad thing, but it wasn’t really. Meat and ketchup is good. I haven’t had decent ribs for well over a year, so I’m sure my standards have been lowered considerably, but I must admit that I really enjoyed the meal. 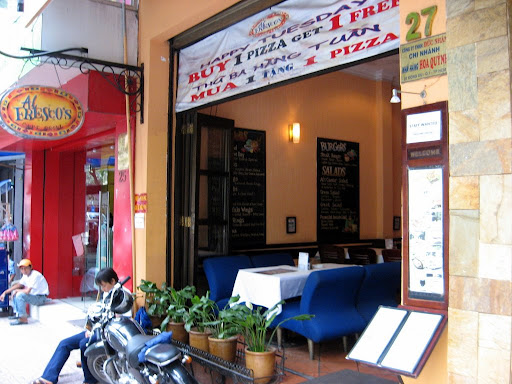 The ribs were served with a side of decent steak fries and a half-hearted attempt at a salad that I didn’t touch. I was too full for dessert, but I sampled a few bites of a solid chocolate fudge cake with ice cream. Although I shied away from eating at Al Fresco’s for a long time, I came away impressed. It seemed from my colleagues’ comments that the menu is hit or miss once you veer from the ribs, but the star attraction is well executed. They seriously use some pretty high-quality meat. The sauce has no tanginess to speak of, but it does the job. I certainly wouldn’t recommend coming here on a short visit to Vietnam, but for the long-term resident with the occasional BBQ rib craving, it serves its purpose well.