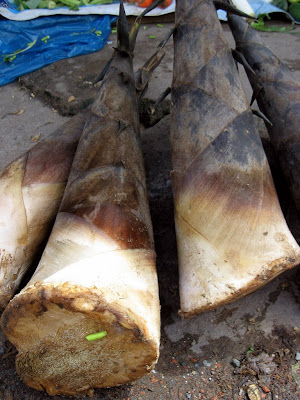 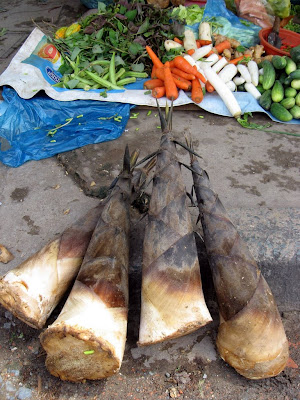 Bamboo shoots are the edible shoots (new bamboo culms that come out of the ground) of bamboo species Bambusa vulgaris and Phyllostachys edulis. They are used in numerous Asian dishes and broths, and are available in supermarkets in various sliced forms, both fresh and canned versions. Bamboo is used in Chinese medicine for treating infections. It is also a low calorie source of potassium.

I encountered these giant fresh bamboo shoots, or măng as they are called in Vietnamese, during a morning stroll along Ton That Thuyet Street in District 4. My favorite Vietnamese bamboo shoot preparations are bun mang (noodle soup made with duck or chicken and eaten with rice vermicelli noodles) and canh chua (sour soup with fish and pickled bamboo shoots). Ga kho xa (braised chicken with lemongrass) is another popular Vietnamese dish that utilizes bamboo shoots, but chicken makes me yawn.

Whereas my family sticks to pork and shrimp when making banh bot loc (sticky tapioca cakes), Miss Adventure’s mother who hails from the central region of the country stuffs her banh bot loc with bamboo shoots. Check out the recipe here. My pal Wandering Chopsticks has a good looking recipe for Chinese hot and sour soup that calls for canned bamboo shoots.

So tell me, how do YOU like your bamboo shoots? Any preference for canned or fresh? My vote’s for canned, especially those longish brown ones with a nice snap to ’em.