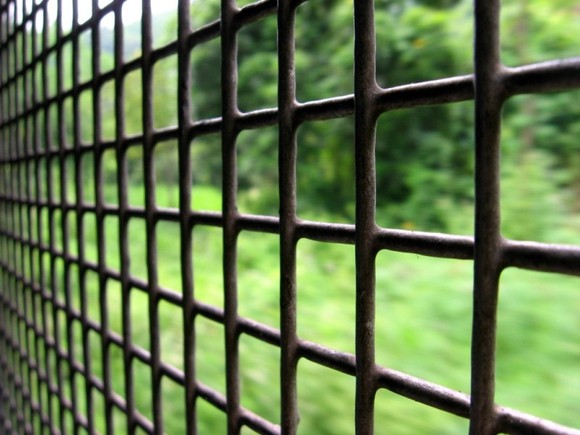 After five days in Hanoi, The Astronomer and I packed up our bags and headed to Sapa, a frontier town and district in Lào Cai Province in northwest Vietnam. Sapa is home to many ethnic minority groups such as H’mong, Dao and Tay.

Even though The Astronomer and I bought our train tickets as soon as we arrived in Hanoi, they were sold out of soft sleeper seats on the evening we were hoping to depart. Rather than endure a sleepless night on a hard sleeper, we opted to travel during the day. We left Hanoi before the sun rose and arrived in Lao Cai eleven hours later. 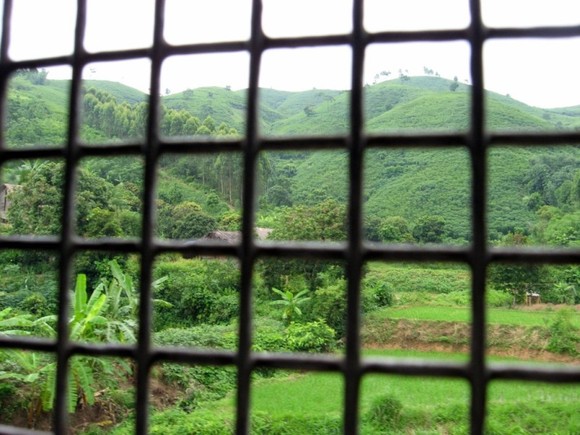 The train’s barred windows made us feel like we were trapped in a cage, but the picturesque and lush scenery was still enjoyable through the metal. The fresh mountain air was also a treat for our much-abused lungs. 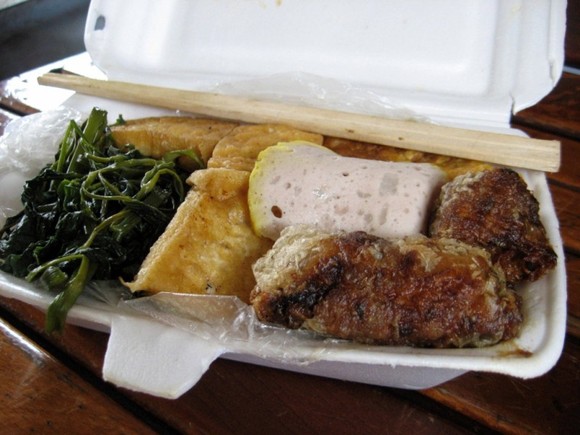 The night before we boarded the train to Sapa, I was worried that we wouldn’t have anything to eat during our lengthy trip. My worrying was for naught because food and drink vendors were hawking up a storm throughout our voyage with vendors seemed to be hopping on and off the train at nearly every stop. Around lunch time, The Astronomer purchased a pre-assembled container of com binh dan (worker’s lunch) that had rau muong luoc (boiled morning glory), cha (pork forcemeat), two soggy cha gio (egg rolls), rice and tofu. The food wasn’t anything special, but it filled The Astronomer’s pit, which was all he really wanted. 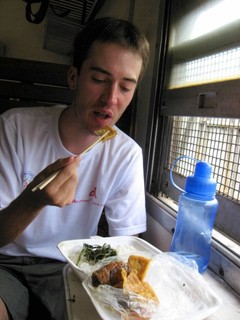 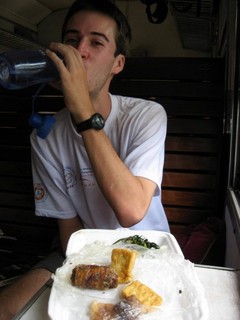 The Astronomer fueling up and hydrating.

When we arrived at the train station in Lao Cai, a hired hand picked us up in a van and drove us to our hotel. It was raining during our drive up the mountain, but we didn’t think much of it. I went on a run as soon as we arrived, and for dinner we dined at our hotel’s restaurant due to the bad weather. The restaurant served a mixture of Vietnamese and Western cuisine. I ate a hamburger. 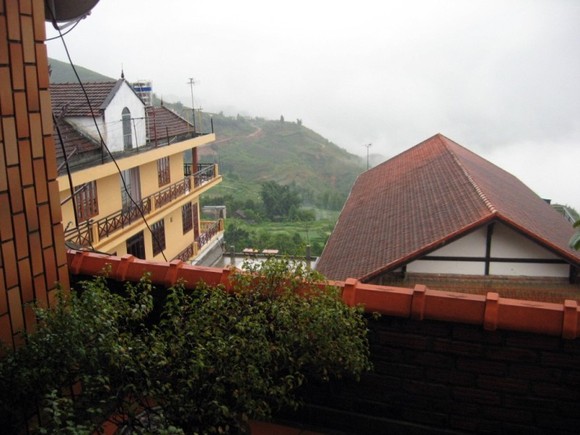 The following morning, we woke up to low visibility and lots of rain. The Astronomer and I were hoping to trek in the hills and zoom around town on a motorbike, but it wasn’t in the cards on this day. 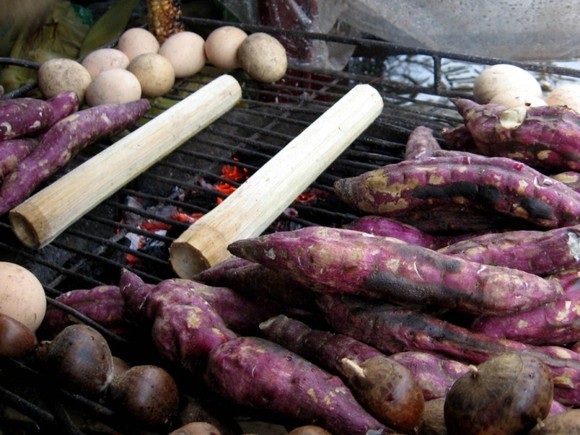 Since trekking and zooming were out of the question, we decided to eat some hill people’s food and shop for colorful, hand-crafted gifts for our families. 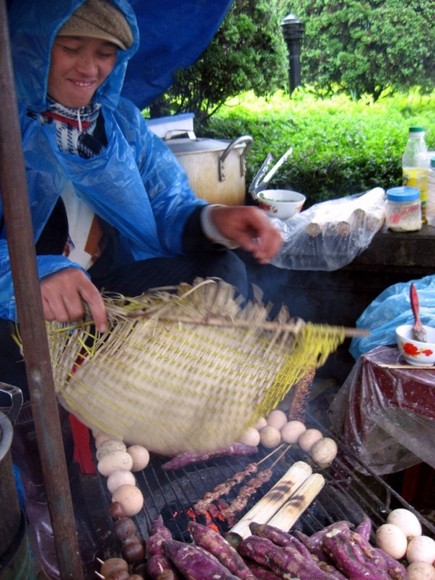 As we headed to the marketplace, we spotted this woman grilling under an awning. After checking out her offerings, we decided to indulge in some grilled meats on a stick and sticky rice in bamboo (com lam). I returned a few days later to try a grilled egg, which ended up tasting just like a regular hard boiled egg. 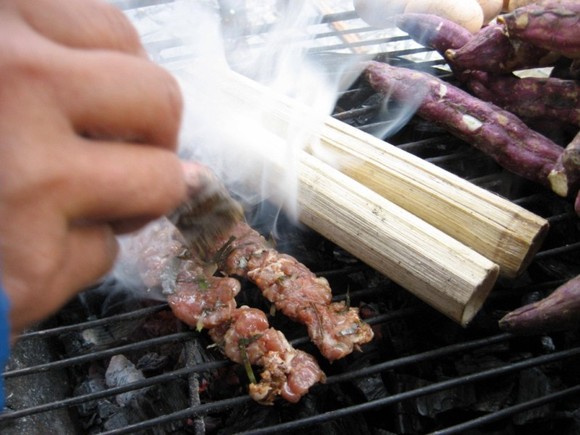 Here she is brushing our meats on a stick with slick coat of oil to keep it from burning. 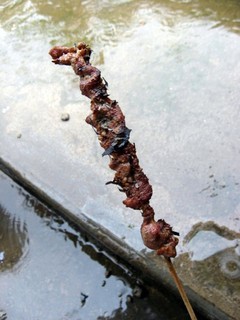 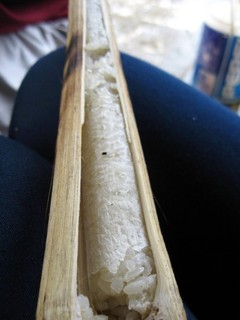 The meat on a stick was laced with lemon leaves and tasted nice and smokey. The Astronomer was so enamored that he ordered another. The hearty com lam warmed us up and hit the carbohydrate spot. We dipped the rice in a mixture of sesame seeds and salt. 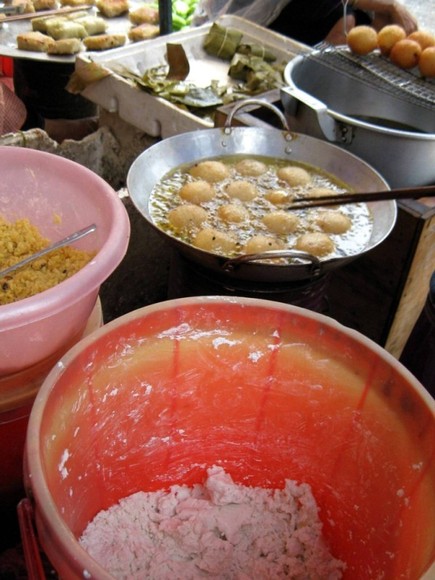 Our next course were sweet and salty Vietnamese doughnuts filled with mung bean paste—banh cam (or banh ran for Northerners). 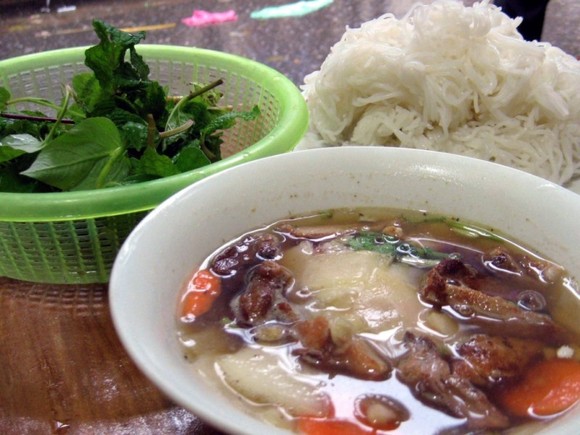 After a bit of shopping, we were ready to eat some more. The Astronomer ordered bun cha—grilled pork patties soaked in a vinaigrette with pickled carrots and daikon served with fresh herbs and vermicelli rice noodles. This version was all around inferior compared to those we ate in Hanoi, Saigon and America. Something tells me it’s hard getting fresh noodles in these here parts. 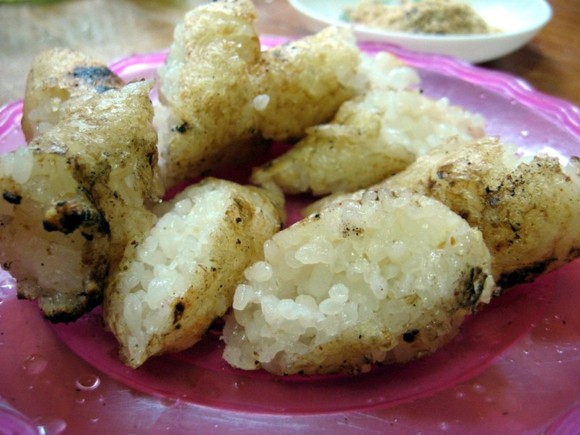 I went for another order of com lam. The grill master at this joint removed the rice from the bamboo to grill. As a result, the sticky rice was much smokier and had a crispier texture. Lovely, lovely. 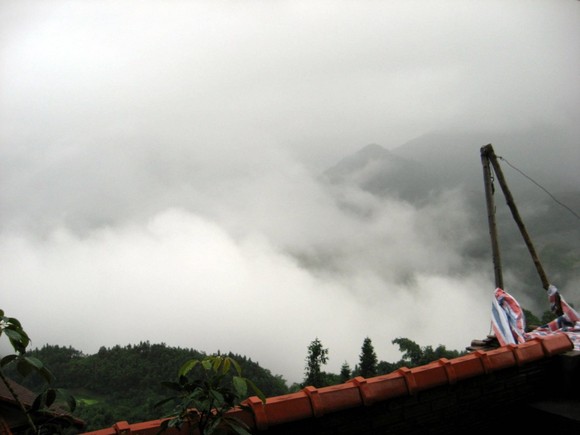 The following three days were kind of a blur. We woke up to low visibility and an abundance of rain each and every day we were in Sapa.  The relentless precipitation due to tropical storm Kammuri caused terrible flooding and mudslides all over the surrounding area, which made it impossible for us to get down the mountain. Even though our situation was bleak, tourists hoping to head back to Hanoi via train were in worse shape because the tracks were seriously damaged. 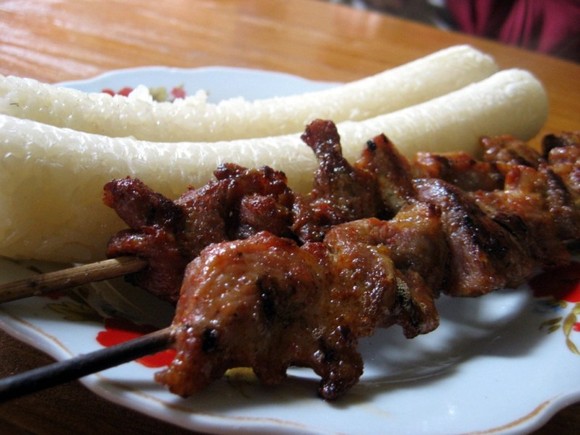 After way too many days of doing nothing and eating sad western fare, The Astronomer and I were dying to move on to our next destination—this trip to Sapa was clearly a bust. Before heading down the mountain, we rolled up the legs of our pants, slipped on some flip-flops and headed into town to chow on hill people’s food one last time. We ordered the usual com lam and meat on a stick. As well as a plate of sauteed chayote with carrots. All three items were excellent, but we were mentally ready to blow this Popsicle stand. A gloomy day at the market. 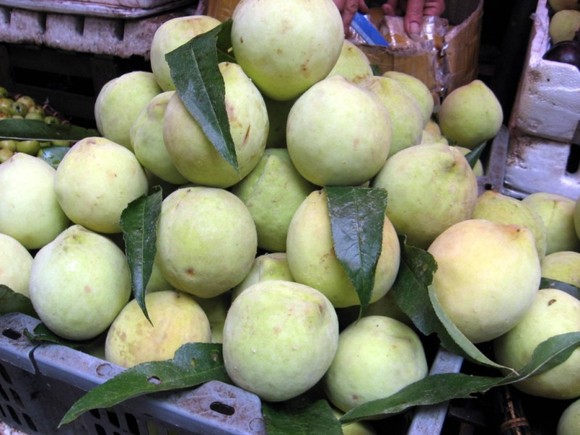 The weather was so gray that even the peaches looked sad. 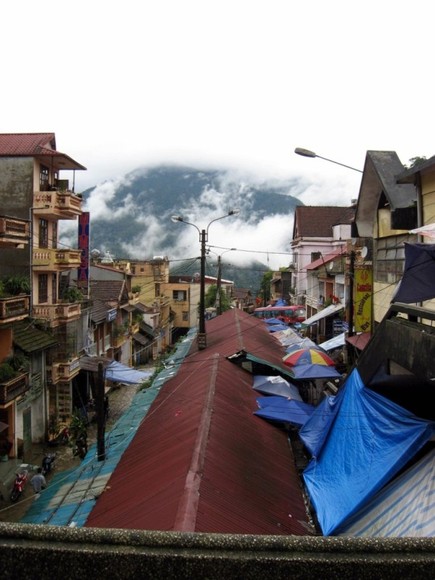 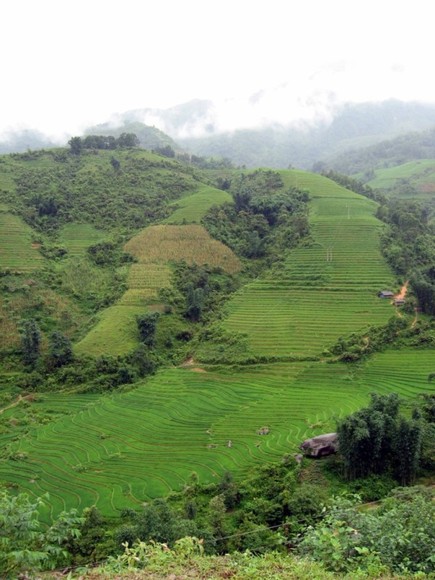 The Astronomer and I eventually hired a driver who owned a military jeep to drive us down to Lao Cai. The rain finally stopped about half way down the mountain and we were able to take in some gorgeous sites. 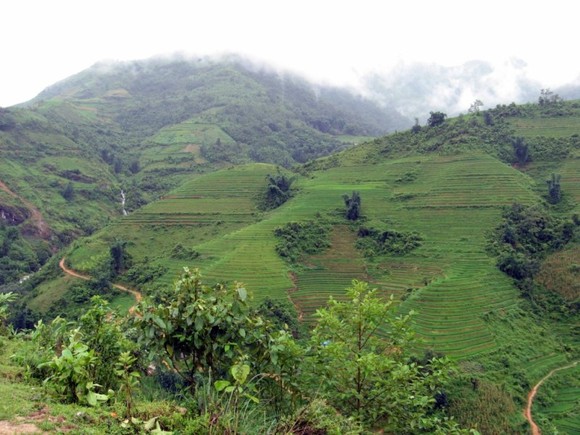 The beautiful rice terraces of Sapa. We asked our driver to drop us off at the Lao Cai/Heiku land border. After clearing customs, we crossed the border into China and eventually made our way to the Beijing Olympics. I can’t wait to experience Sapa without the interference of a relentless tropical storm.