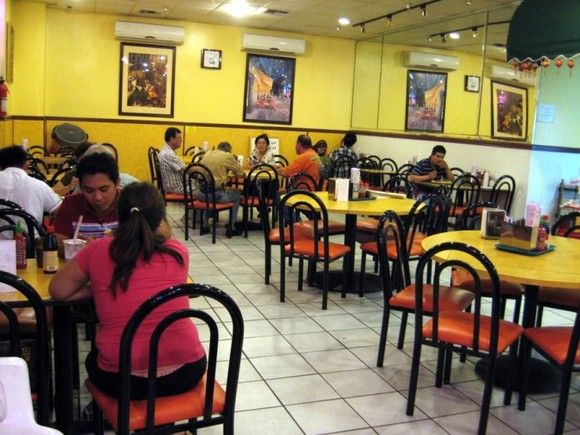 For one of our first meals out on the town, The Astronomer and I met up with veteran L.A. blogger Wandering Chopsticks. The evening’s destination was admittedly unoriginal, but I was craving a cool bowl of bun (vermicelli rice noodles), and WC knew a great place in nearby San Gabriel.

The San Gabriel Valley has the largest concentration of Chinese-American communities in the United States and a robust Vietnamese population as well. Driving to the restaurant, we passed by all sorts of awesome looking ethnic eats that I am muy excited to try—exploring this culinary landscape is going to rock!

Prior to arriving at Cơm Tấm Thuận Kiều, WC warned us that the place was a bit dirty, but after surviving the squatters in China, I wasn’t too worried. 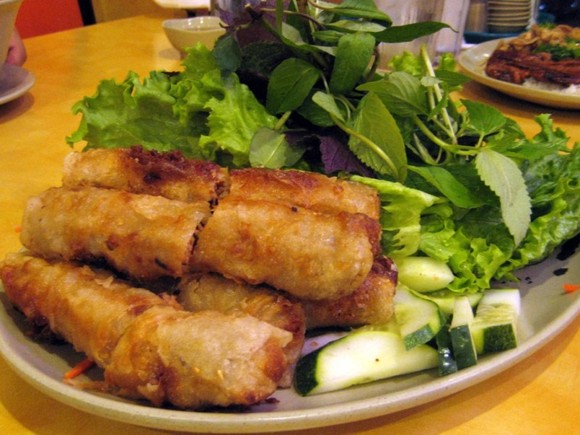 Our group of three started with an order of cha gio ($5.50), which came with herbs, greens and a few cucumber spears. Nuoc mam was served on the side for dipping. The rolls were served hot out of the fryer and tasted fantastic—crispy blistered skin with well-seasoned porky innards. Unlike Ba Sau’s pinky-legnth cha gio in Saigon, these were super-sized to satisfy American appetites. After eating my portion of the cha gio, I was quite full and could’ve called it a night. However, I still had an entree coming my way. 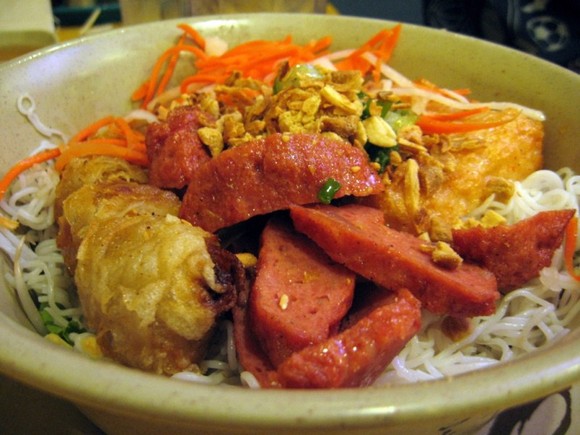 WC and I ordered the same dish—bun chao tom nem nuong cha gio. Now, that’s a mouthful! Literally! The bottom of the bowl was covered with fresh bean sprouts, shredded lettuce and herbs. Next, a nest of vermicelli rice noodles. And lastly, the meat—egg rolls (cha gio), meat balls (nem nuong) and shrimp paste wrapped around sugarcane (chao tom). The bowl of bun was garnished with pickled carrots and daikon, scallion oil, peanuts, and fried shallots. The noodles were solid, with the exception of the sugarcane-less chao tom and slightly rubbery nem nuong. WC postulated that the meat balls were reheated rather than grilled to order, hence their unsavory texture. Portion-wise, the bowl was the size of a stadium. If there’s a next time, I’m definitely sharing my noodles with another. 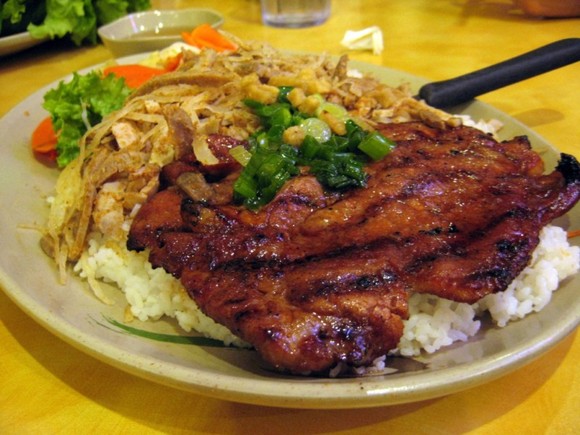 The Astronomer stuck to the broken rice side of the menu and settled on com tam bi suon nuong ($4.99)—broken rice with grilled pork chops and shredded pork. It’s been three months since Vietnam and I still can’t get over how ginormous Vietnamese-American portions are; the slab of grilled pork was the size of my face. It’s a good thing The Astronomer is a powerful eater.

The three of us left Cơm Tấm Thuận Kiều stuffed to the gills.