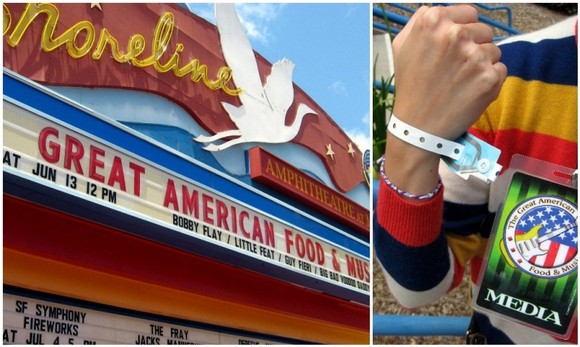 By now, I’m sure everyone’s heard that this past weekend’s Great American Food & Music Fest was a bust. Hour-long lines snaked around the facility, vendors ran out of food (I’m looking at you Katz’s Deli and Junior’s Cheesecake), the cashless computer system malfunctioned, and worst of all, hoards of attendees were left confused and frustrated due to the poor planning and lack of availability of schedules, maps, and so on. With 10,000+ “serious eaters” descending upon ten or so vendors, it’s not too surprising that disaster ensued.

Even though all signs pointed to fail, fail, and more fail, The Astronomer and I managed to have a ridiculously fun day. It definitely helped that we had complimentary all-you-can-eat passes, unlimited access to alcohol, and that we weren’t pushing a stroller with a crying baby in it. We’re also optimistic folks, which proved to be quite helpful as we waited for over an hour for wings and pastrami that never came our way. Here’s our take on the first-ever Great American Food & Music Fest—we came, we ate, we actually left smiling. 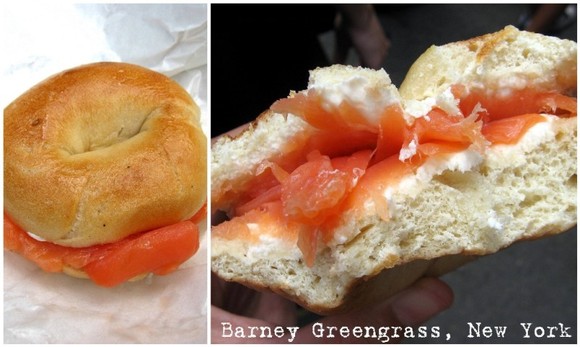 Of all the event’s vendors, I was most excited about Barney Greengrass, because smoked salmon is my weakness. For reasons unfathomable to me, no one else seemed to be interested in bagels with cream cheese and lox from New York City. How can that be? A super-short line meant I had access to as many bagels as my little heart desired. I would’ve downed four of them, but The Astronomer stopped me at two.

Without our magic bracelet that made everything free, the bagel with lox would’ve cost $5. 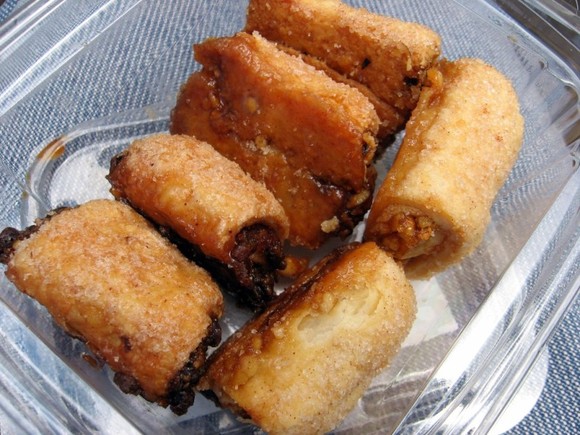 We also procured a box of assorted rugelach ($5), which included cinnamon, apricot, chocolate raspberry, and raspberry varieties. While the bagels didn’t fare too well on their voyage from NY to CA, the rugelach tasted very fresh, flaky, and sweet. 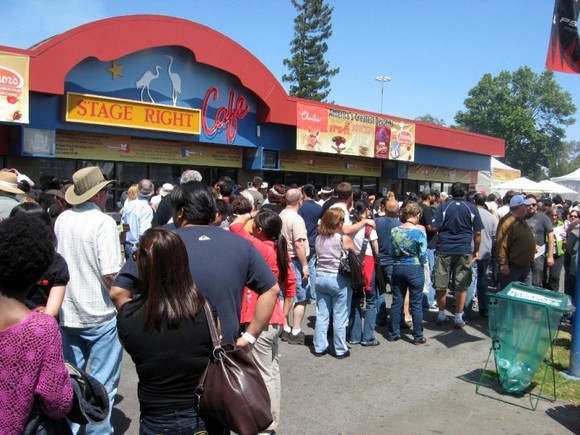 After quelling my initial hunger, The Astronomer and I walked around the facility to peruse the action. As we made our way through the crowds and weaved in and out of endless lines, my goal of eating at every single vendor was looking like an impossibility. Instead of letting frustration get the better of us, we decided to approach the Great American Food & Music Fest as if it were a food-centric amusement park. Interminable lines became “opportunities” to regroup and anticipate. Just like at Six Flags, we attacked the rides with the shortest lines first. 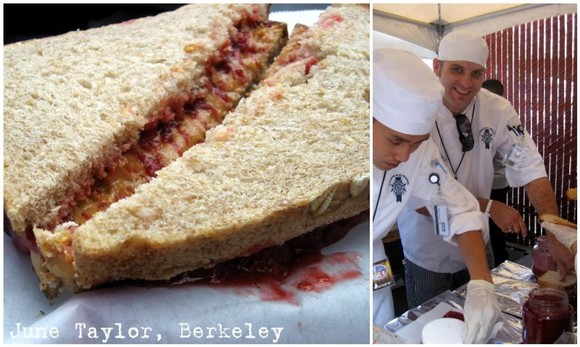 Our second stop was at June Taylor of Berkeley, California, who was churning out “America’s Best Peanut Butter and Jelly Sandwich.” The line was only ten deep, but the kicker was that we had to order and pay in one line, and then move to another to pick up the goods. It took nearly thirty minutes to receive our PB&J ($6). Made with Koeze peanut butter and June Taylor’s Strawberry Conserve on wheat bread, the sandwich was fine, but definitely not “America’s Best Peanut Butter and Jelly Sandwich,” whatever that means.

An interesting note: all of the food at the festival was prepared by culinary students from the California Culinary Academy in San Francisco. 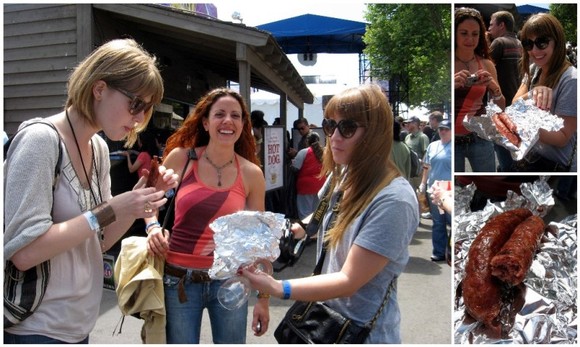 Next, The Astronomer and I met up with Foodbuzzers, Alexa and Kiki, and featured publishers Alison and Alejandro of Local Lemons for some Texas sausages from Southside Market. We received a sample fresh out of the smoker in exchange for a cold beer. The sausages were so juicy that The Astronomer and I returned to Southside for seconds later in the day, when the lines had shortened dramatically. More wieners to come… 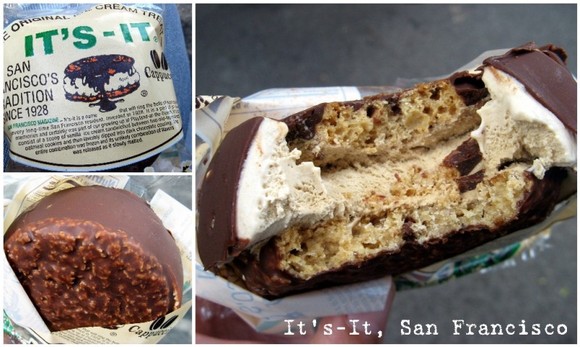 After waiting at the end of the longest line for wings and pastrami, The Astronomer and I called it quits and grabbed some low-hanging fruit in the form of ice cream sandwiches from San Francisco’s It’s-It ($3). I chose a cappuccino, while The Astronomer went with vanilla. What’s special about It’s-It is the snappy spice cookie that sandwiches the just-cold-enough ice cream. Our prayers for wings and pastrami would be answered later in the evening. 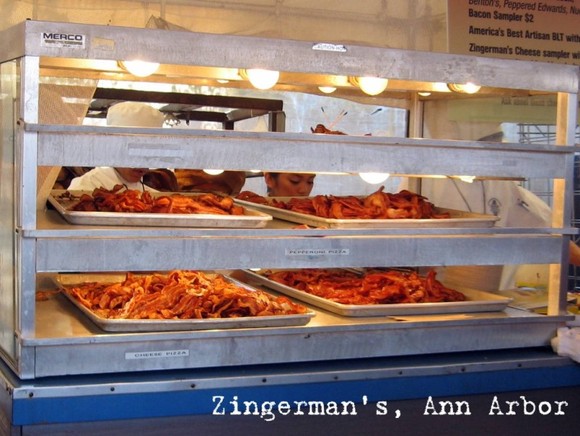 Even though the line at Zingerman’s stretched for an hour and fifteen minutes, The Astronomer and I endured because it would’ve been anti-American of us to leave the festival without eating copious amounts of bacon. 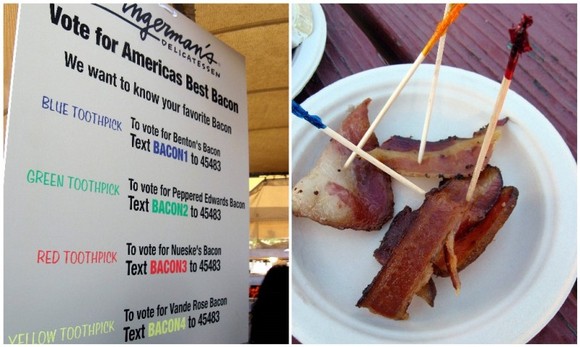 The bacon platter ($2) consisted of four of the best bacons in the country as chosen by Zingerman’s baconologist, Ari Weinsweig. The selection included Allan Benton, Nueske’s, Vande Rose artisan dry-cured bacon, and Edwards of Surry, Virginia. I liked the thickness of Benton’s bacon and the flavor of Edwards. The Astronomer and I aren’t hip to texting, so we were unable to cast our vote for America’s Best Bacon. 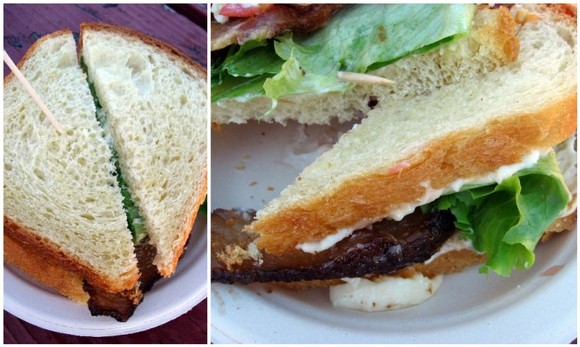 Zingerman’s was also dishing up BLTs ($7) made with vine-ripened locally grown tomatoes, local lettuce, Hellman’s mayo, and Acme Bread Company’s Pullman loaf. I chose Benton’s bacon for my sandwich. The bread was on the dry side, while the mayo was sloppily applied. I tossed the riffraff aside and ate the bacon on its own. 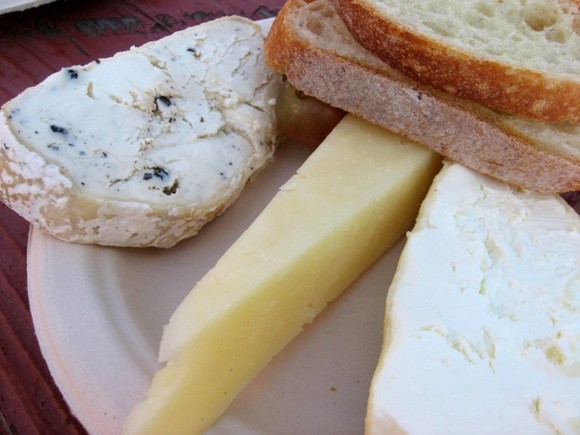 We also picked up a Zingerman’s cheese platter ($5), which included, from left to right, Bridgewater (rich and dense mold-ripened cheese, studded with freshly ground Telicherry black pepper), Great Lakes Cheshire (hard cheese made of extremely rich milk), and Lincoln Log (rich texture with hints of citrus, a mild goat flavor and a touch of mushroom finish). I liked how all three cheeses were strong and distinct. 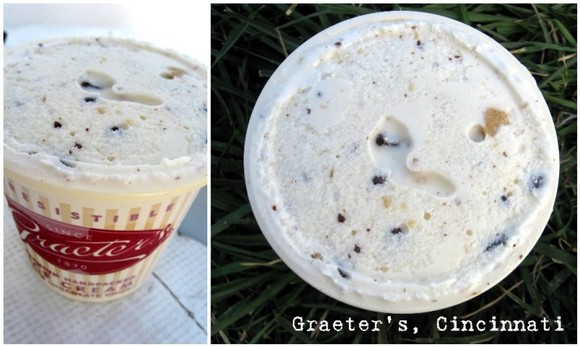 Since all of the desserts were concentrated in one area of the amphitheater, The Astronomer and I decided to sample them all at once. Sadly, by this point in the day, Junior’s was fresh out of their “most fabulous” cheesecakes. First up, Graeter’s Famous Ice Cream from Ohio. The chocolate chip cookie dough ice cream ($6) was rich and creamy, with plenty of doughy gobs and chocolate chips. Although I thought Graeter’s was great, given a blind taste test, I most likely wouldn’t be able to tell the difference between this and Ben and Jerry’s. 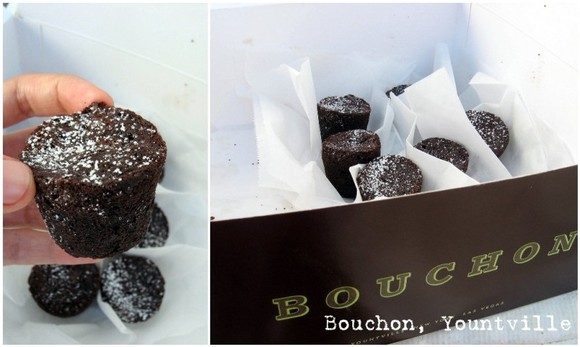 Next, came little dark chocolate corks ($2) from Bouchon Bakery in Yountville. The brownie-esque bites provided a shot of pure cacao into our systems. 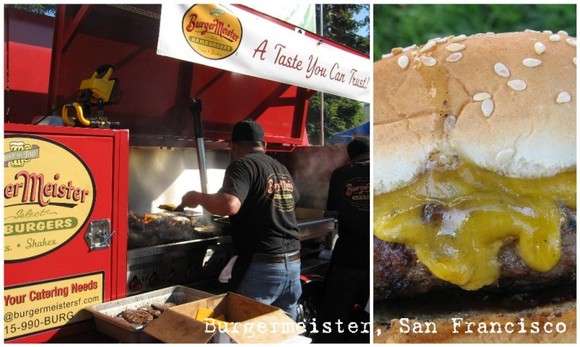 After overloading on sugar, we headed to Burgermeister for a half-pound cheeseburger made with Niman Ranch beef ($10). We received the burger plain and loaded up on ketchup and pickles at a seperate station. The Burgermeister burger was solid, but nothing about it stood out as spectacular or warranted its invite to the festival. It would’ve been awesome if the Luger Burger from Brooklyn or the Rouge Burger from Philadelphia had represented the great all-American burger. 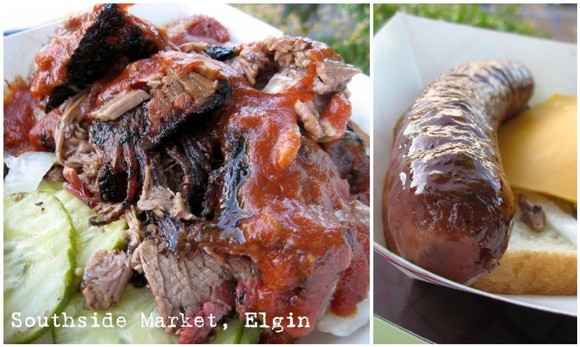 As promised, more wieners! And brisket too ($12)! The folks at Southside Market really did a tremendous job feeding the crowd quality meats throughout the day. With their portable smoker parked out front, there was an abundance of fresh brisket and snapalicious sausages to appease the masses. 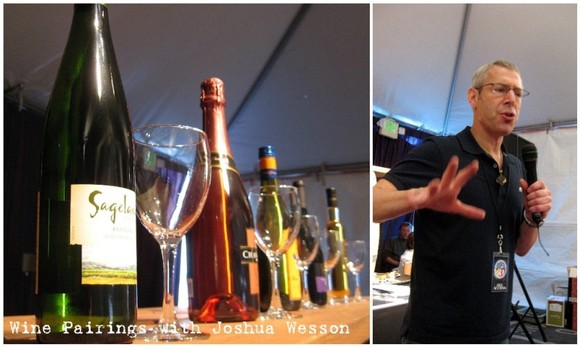 Our day at the festival flew by quickly given the lines and crowds. When 7 PM rolled around, The Astronomer and I were excited to sit down and enjoy a wine pairing class with sommelier Joshua Wesson. Wesson, former sommelier at Quilted Giraffe and Hubert, was an awesome teacher because he’s a funny chap who doesn’t take himself too seriously. 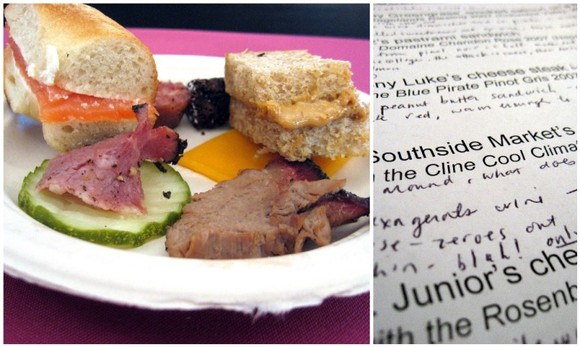 The class was so fun and informative that I even took notes! Sommelier Wesson taught me that any wine paired with peanut butter will result in extreme funkiness, and that matching fatty foods with acidic wines is a good idea. I walked away from the session with a better understanding of how and why wine pairings work, although I’m still not convinced that drinking wine enhances my overall dining experience.

After gracefully sipping five glasses of wine, I was feeling buzzed and rowdy. As we were heading toward the wings and pastrami vendors for our last meal of the day, I heard Bobby Flay’s voice booming from the Serious Eats stage. Eee! You know how I feel about Bobby Flay. I squealed, hooted, and hollered with delight. As luck would have it, Bobby invited me up on stage to help him prepare corn and shrimp tamales! Man, it was a blast. It would’ve been even better had he not denied me a BAM! upon request. 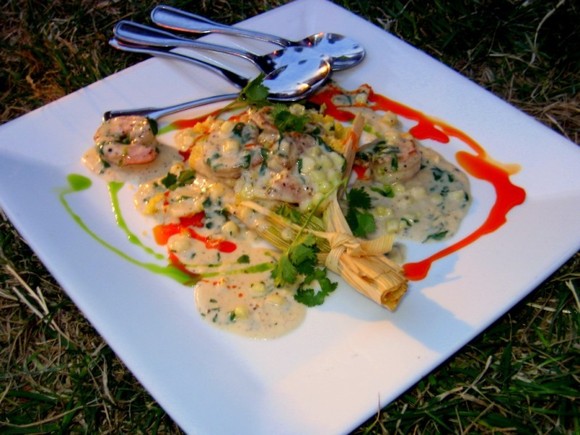 Here’s our finished product—I was in charge of the orange and green squiggles. The perfectly cooked shrimps paired deliciously with the sweet masa. 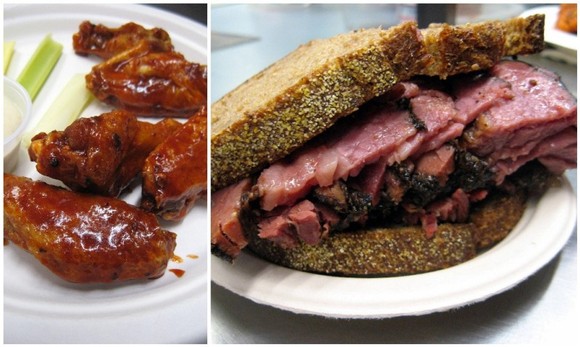 Last, but certainly not least, we dug into some buffalo wings from Frank and Theresa’s Original Anchor Bar in Buffalo and a hot pastrami sandwich on rye from Katz’s. The “suicidal” wings were tangy with a bit of heat, but definitely not spicy enough to warrant their name. The pastrami sandwich was really, really fabulous. After running out of meat around 4 PM, Katz’s took a three hour hiatus to prepare another batch. Our pastrami was sliced to order and served hot. The sandwich was so good and well worth the wait.

We exited Shoreline at a quarter till ten.

A very special thank you to Jada of Giant Noise for the invite. And a very special shoutout to Alison and Alejandro of Local Lemons for being cool cats and good eaters.