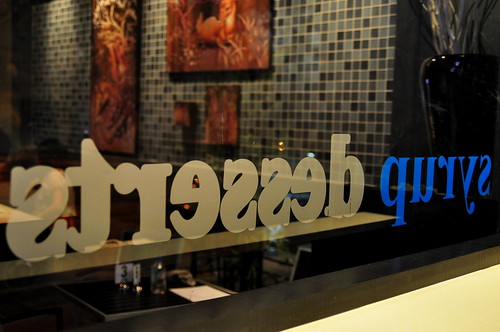 Remember that little statement I made in my Squid Ink profile about being the type of eater who waited for good reviews to roll in before slapping down my credit card to try a new restaurant? Well, there should have been an asterisk next to it. Positive buzz or not, I’ll be the first in line to test out a newly opened eatery if it specializes in Belgian waffles. While I’ve never had the pleasure of biting into a piping hot waffle on the streets of Belgium, I’ve tasted an adequate approximation stateside at Bonté in Philadelphia and have been enamored ever since.

When I received news that Syrup Desserts would be offering Belgian waffles in the heart of downtown Los Angeles, a huge smile swept across my face. It’s been years since I’ve experienced the crisp, chewy sweetness of a Belgian waffle and was giddy for another go. 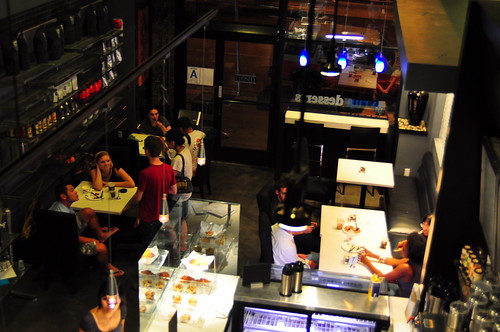 My posse of late night revelers, including The Astronomer, Diana Takes a Bite, Eat, Sip, Chew, Naked Sushi, The Roaming Belly, and L.A. and O.C. Foodventures, arrived on the Syrup Desserts scene minutes before eleven. We’d just finished a night of celebrating and boozing at The Association and were ready for a sugary nightcap.

Syrup Desserts is a two-story temple of crepes, waffles, and sweet grilled cheese sandwiches. After placing our order at the counter—one waffle and one grilled cheese—we hoofed it to the second floor and settled into a table fit for six. The upstairs decor reminded me of a set from a Bunim/Murray production. 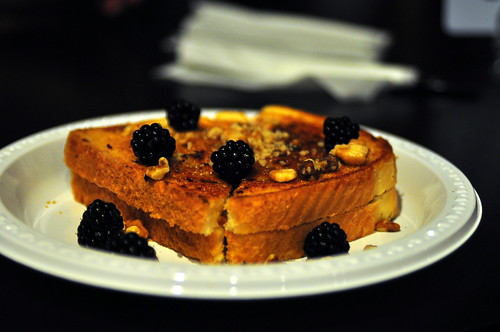 The Astronomer’s grilled Muenster cheese sandwich with blackberries and walnuts ($5.50) tasted much more impressive than it looked. The thin slices of white bread were smeared with butter and sprinkled with sugar, which created a toasty and caramelized exterior. 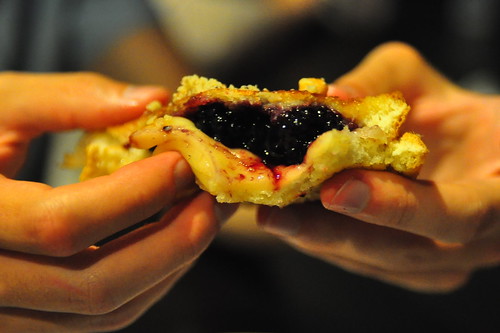 The innards spewed sweet berries and gooey cheese. The kitchen did not skimp on the fresh blackberries, which resulted in a sweet and savory amalgam of flavors. What a delight! 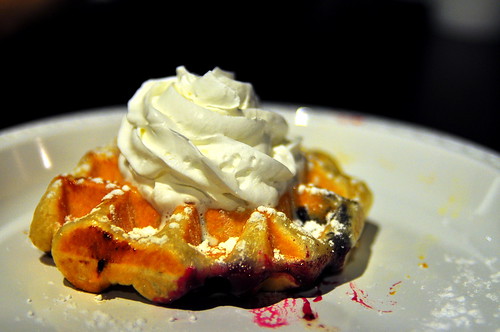 Syrup Desserts didn’t offer an unadorned Belgian waffle, so I went with a Blueberry Lemon Drop that was served with powdered sugar and whipped cream ($1.95). Upon receiving my waffle, I pushed the whipped cream aside in order to taste it in its simplest state. The bites where the cream hadn’t soaked in were crisp, but sadly not caramelized, and tasted doughy rather than chewy. The waffle had a certain appeal, but I was hoping for a Liège waffle with chunks of pearl sugar and caramelized ridges.

We’ll be back for the Honey Pot.