As our server cleared away our plates of half-eaten food, my mother whispered to The Astronomer and me, “Bottega Louie is only a little better than Bucca di Beppo.” Agreeing with my mother’s sentiments, The Astronomer suggested that we should have gone to Maggiano’s for dinner instead. When the memories of a meal evoke comparisons to chain restaurants, I can’t help but weep a little inside. It started out well enough. Bottega Louie was chosen as the site of our monthly dinner date because my vegetarian mother was in the mood for Italian, and downtown Los Angeles was midway between our respective locations. Since its opening this past April, positive reviews have been rolling in on a regular basis on both the blogger and mainstream media fronts. Even though I received a few stern words (you know who you are) warning me against dining here, I decided to take my chances.

Our party of three was seated in the main dining room with a great view of downtown’s gritty streets. All one needs to know about the interior is that it is as loud as it is pretty. After placing our orders, we were served crusty slices of bread wrapped in wax paper with softened butter. For my main, I chose the clam pizza with mozzarella, pecorino Romano, roasted peppers, thyme, extra virgin olive oil, and garlic ($15). Sliced into eight generous pieces, the pizza was portioned for two hearty eaters. I was more or less satisfied with the various components of my pie save for the main attraction—the clams. The bits of chewy meat dotting my pizza hardly resembled clams due to their grossly mutilated state. Flavor-wise, the clams boasted essence of tin can rather than essence of the sea. My mother’s penne pomodoro ($9) with tomato sauce, garlic, and extra virgin olive oil was served with grated Parmesan cheese on the side. With a dish this simple, it is of utmost importance that each and every ingredient is impeccable. Even with a heavy sprinkling of salty cheese, the penne tasted upsettingly bland.

The Astronomer’s house-made ravioli stuffed with spinach and ricotta ($12) was the sole winner among our mediocre main dishes. The light cream sauce with pancetta, sage, and peas was good enough to sip with a spoon once the pasta had disappeared. In addition to our mains, we also shared three sides. The shaved fennel and sweet onions ($6) were dressed in vinegar and topped with sprigs of dill. The thin slices of fennel were pleasant enough, but the raw and astringent onions stubbornly lingered on our tongues long after swallowing.

The burrata with pesto, olive oil, sea salt, and grape tomatoes ($8) was thankfully very delicious. The stringy cloud of light and flavorful burrata was greatly enhanced by its well-chosen accouterments. The white anchovies ($7) arrived resting on a tomato with micro greens and half a lemon served on the side. The anchovies were terrific, but I would’ve gotten a bigger kick out of a more complicated preparation. For the sweets portion of our meal, The Astronomer chose the semifreddo with Brandy macerated fruit, chocolate, and caramelized almonds ($7). The semifreddo was lovely in its half-frozen state, especially the bites that contained plump golden raisins. The candied cherries strewn on the side were too tooth-achingly sweet to balance the semifreddo properly. The famed Bottega Louie peanut butter terrine ($7) lived up to its hype. The alternating layers of peanut butter and dark chocolate ganache were rich, decadent, and guilt-inducing. 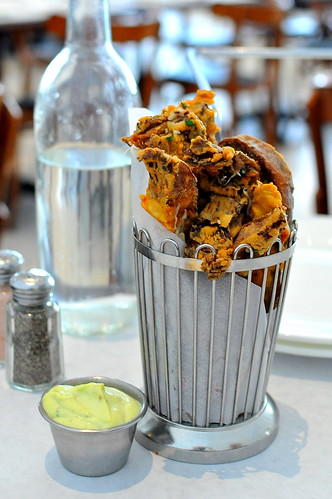 Portobello fries ($10). Tasty enough, but about $5 too expensive. 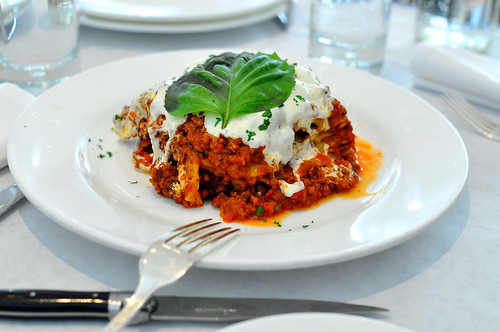 Lasagna ($16) with a traditional Bolognese meat ragù, béchamel, buffalo mozzarella, ricotta, and Grana Parmesan. My dining companion found it very tasty. I found it about $5 too expensive. 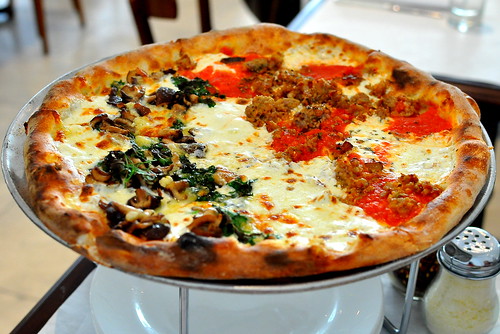 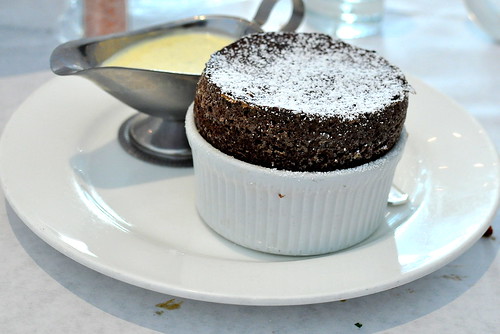 Chocolate souffle ($15). You guessed it, tasty, but about $5 too expensive.