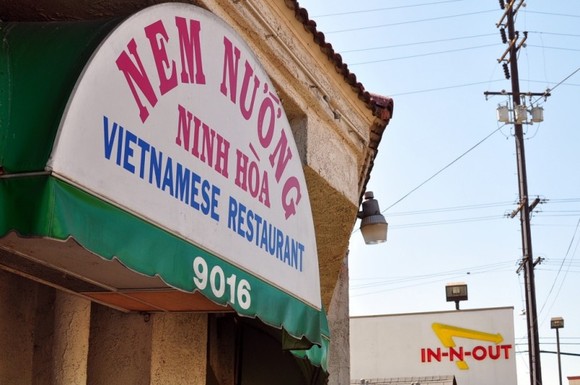 After sitting in bumper to bumper traffic for a solid half hour, it was clear that my dreams of kicking it with carnies and eating deep-fried White Castle burgers at the L.A. County Fair had to be reassessed. Of course I was looking forward to the smelly petting zoos and dizzying Tilt-a-Whirls, but wasting a beautiful summer afternoon idling on the freeway wasn’t in the cards, so I did what I had to do. “There will always be next year,” consoled The Astronomer.

With Plan A kicked to the curb, we moved on to Plan B—cruising for grub in the San Gabriel Valley. Twice in the past week, I’ve received recommendations for a Central Vietnamese restaurant in Rosemead named Nem Nướng Ninh Hòa. “It’s one of the best,” said Hong, one half of the Ravenous Couple. “It’s in my top three and I’ve been going here for years,” said Wesley, one half of the Two Hungry Pandas. After confirming the address with yet another Panda, we made our way to Nem Nướng Ninh Hòa in time for lunch. 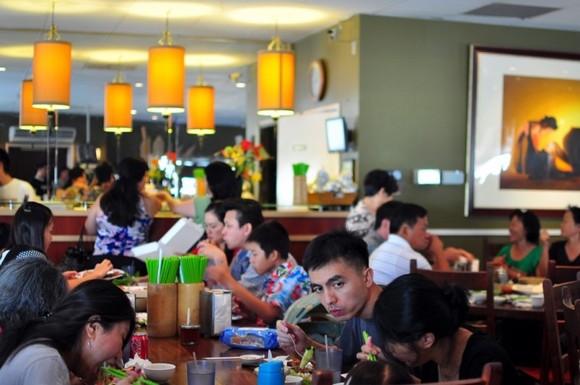 The restaurant was operating at full capacity when we arrived. After placing our names on the waiting list and moseying around for fifteen minutes, we were seated at a table for four.

In between placing our orders and the food arriving, I felt a tap on my shoulder. “Are you The Gastronomer?” asked a friendly looking gentleman. “And you’re The Astronomer!” he said while pointing at Vernon. I can’t remember whether or not we actually confirmed our pseudonyms, but we did invite him and his friend to join us. Surely, it was the least we could do for the first readers to spot us out in public! 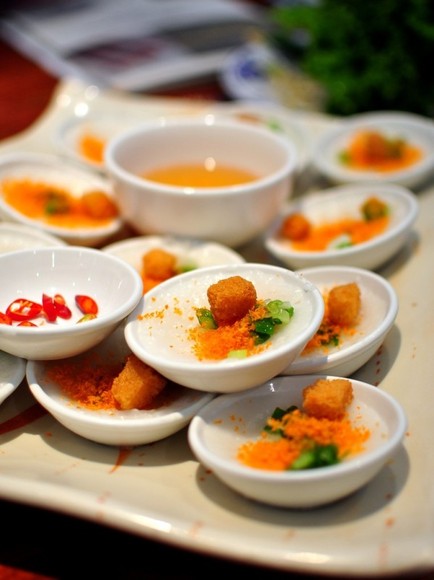 We started off with an order of banh beo ($5.49), a dish from the city of Hue. The twelve steamed rice cakes arrived in shallow porcelain dishes piled atop one another. Each cake was sprinkled with dried minced shrimp, smeared with scallion oil, and finished with a crisp “crouton” of rendered pork fat.

To eat, we spooned a bit of sweet fish sauce atop the warm banh beo and dug in with spoons. Once while visiting Hoi An, The Astronomer and I ate banh beo using flat wooden sticks! The steamed rice cakes were doughier and less pliable than the ones we enjoyed in Vietnam, which surprisingly bothered The Astronomer much more than me. I love how my boy’s become a Vietnamese food snob. 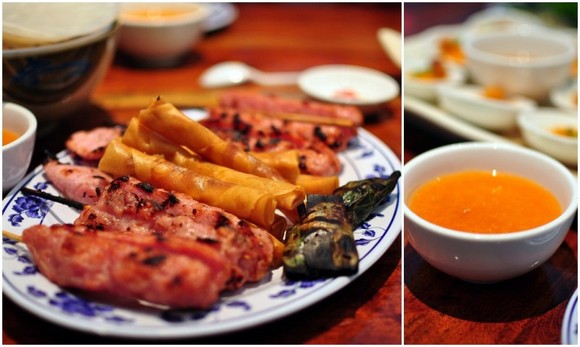 Next to arrive was the house special, a selection of Ninh Hòa-style grilled pork meatballs and skewers ($14.99). In the great tradition of Vietnamese do-it-yourself dishes, theproteinwas accompanied by rice paper and a forest of greens and herbs for garnishing and wrapping. A curiously goopy orange sauce (tuong nep)was served on the side for dipping. 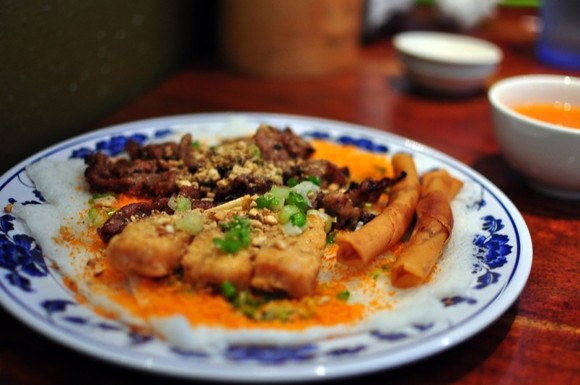 My favorite dish of the afternoon was the banh hoi ($8.25). The woven mats of rice noodles were topped with thit nuong (grilled pork), tau hu ky (shrimp cake wrapped with bean curd), shrimp egg rolls, scallion oil, and a smattering of dried shrimp dust. The texture of the banh hoi was just about perfect, soaking up the nuoc mam like a gauzy sponge.