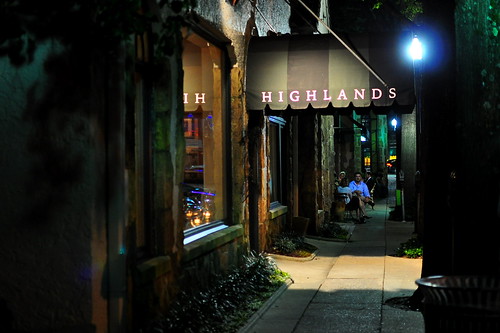 Whenever I tell someone that I’m visiting Birmingham, I’m usually on the receiving end of a sympathetic smile and a less than enthusiastic, “Well, have fun down there.” Alabama’s bad reputation among liberal-leaning city dwellers is quite unfortunate because culinarily speaking, the state’s got it going on. In addition to finger-licking good barbecue, Alabama is home to hundreds of small farms growing spectacular produce year-round and an extraordinary chef named Frank Stitt.

Born and raised in Cullman, Alabama, Chef Stitt stumbled into the culinary world serendipitously while studying philosophy at Berkeley. He spent time in the kitchens of Jeremiah Tower and Alice Waters, and worked alongside famed food writers Richard Olney and Simca Beck, while living in The Bay in the 1970s. Following California, Chef Stitt traveled to Provence and Burgundy. He eventually returned home to Alabama and opened his first restaurant, Highlands Bar & Grill, in 1982 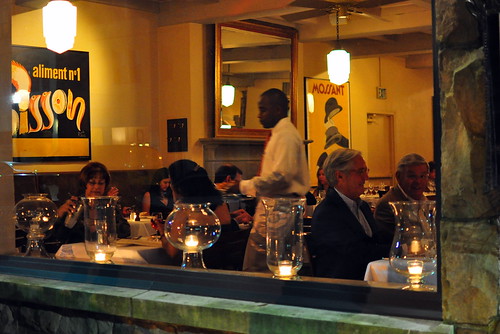 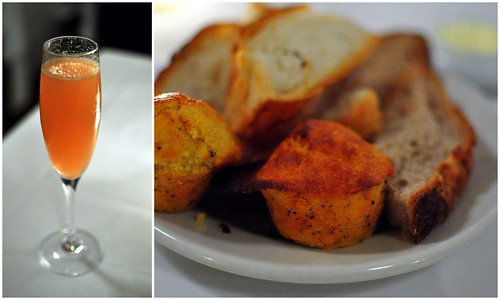 To celebrate the peak of muscadine season and our third visit to Highlands Bar & Grill, The Astronomer and I started dinner off with glasses of bubbly Prosecco enhanced with a splash of fresh muscadine juice ($9). The little corn muffins delivered to our table along with the drinks were just as good as I remembered. The secret to outstanding corn bread is the liberal employment of smoky bacon fat. 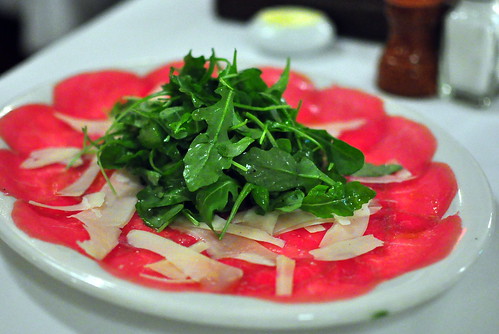 I was tempted to order my standby starter, the stone ground baked grits with country ham, mushrooms, thyme, and Parmesan ($10), but The Astronomer encouraged me to branch out and try the beef carpaccio with shaved Parmesan, arugula, and horseradish sauce ($11). The flavors were light, clean, and a little spicy with both the arugula and horseradish packing heat. 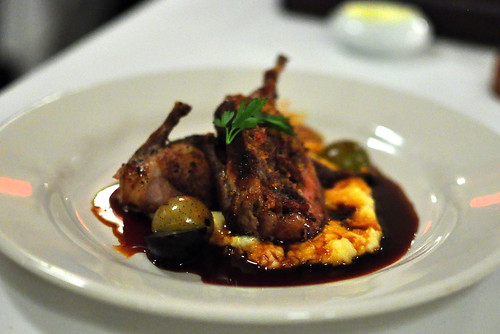 We also shared a succulent roasted quail, which was served with a cornbread stuffing containing apple-smoked bacon, muscadines, and Muddy Pond Sorghum, a natural sweetener ($13). We cleaned the meat off the quail’s tiny frame and enjoyed the drippings-soaked grits immensely. 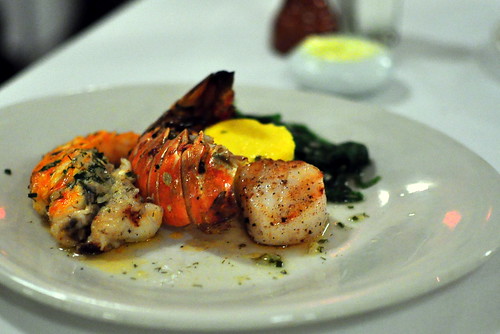 For my entree, I ordered one of the evening’s appetizer specials—grilled and butter-poached lobster served with a scallop and a corn cake ($18). The local Floridian lobster wasn’t nearly as tender as its northeastern counterpart, but I appreciated the restaurant’s effort to keep the number of food miles in check. The scallop, on the other hand, was supple, well-seared, and seriously fantastic. 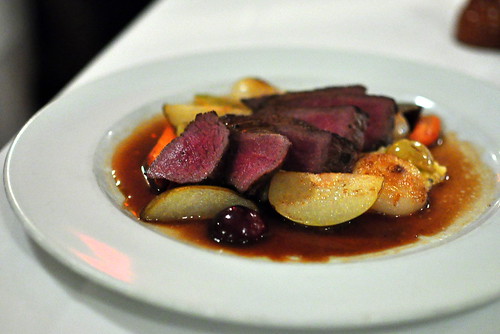 The Astronomer’s pan-roasted venison with Coosa Valley grits, pears, muscadines, and red wine ($29) was served just as he requested, medium-rare. The fruity accompaniments provided a lovely sweetness to balance out the meat-intensive plate. 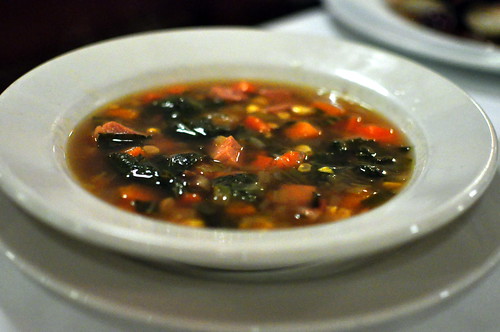 Per our waiter’s suggestion, we also shared a bowl of Cullman County sweet potato soup with collard greens and apple-smoked bacon ($8). The chunky soup was good, but forgettable compared to our other offerings. 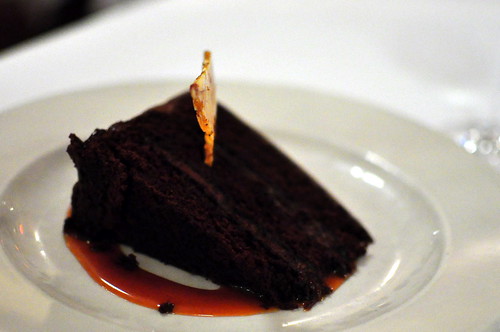 For dessert, we split a thick slice of sweet and salty cake ($8.50). Unlike the one-note wonder I ate a week earlier in Brooklyn, the salted caramel-soaked chocolate cake with whipped caramel ganache was distinctly sweet and salty. I should’ve known better than to doubt a Southern-made layer cake. To accompany our dessert, we were treated to two glasses of Sauternes Chateau Villefranche (2006). The wine paired so perfectly with the caked that I squealed a little. I need to indulge in post-dinner libations more often.

Throughout our dinner, Chef Stitt came into the dining room several times to meet and greet with longtime regulars. I think it’s quite cool that even after twenty-seven years in the business (and three other restaurants to tend to), he can still be found working the line on a weeknight. Now, that’s classy.