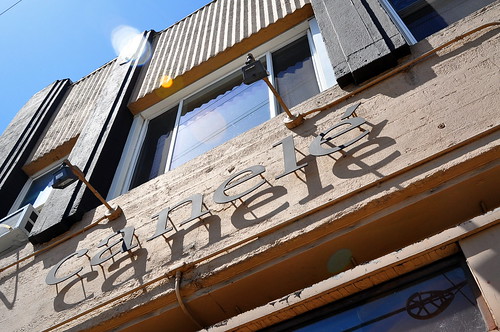 Whereas the majority of the restaurant write ups featured on this site are based on one lone visit, with Canelé, I decided to shake things up a bit. Inspired by professional restaurant reviewers across the land and one of my favorite Los Angeles-based food blogs, Exile Kiss, I decided to eat at Canelé three times before pounding out a post. So, from September to November, I brunched at Canelé once and sat down for dinner twice. To get the fullest sense of the kitchen’s range and abilities, I ordered from both the regular and specials menus. Here’s how my little experiment went down: 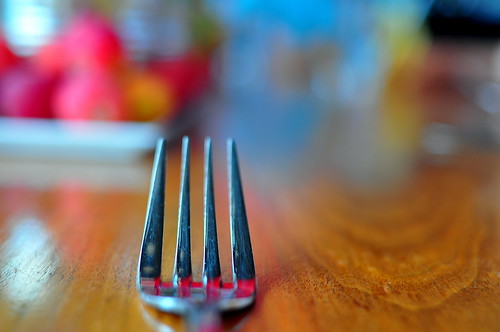 Chef Corina Weibel and her business partner Jane Choi are the two forces behind Canelé, a neighborhood gem in Atwater Village. Chef Weibel previously cooked at two of the city’s most beloved restaurants, Campanile and Lucques, while Ms. Choi worked the front of the house at New York City’s Balthazar and Pastis. The gals joined forces to open Canelé in 2006. 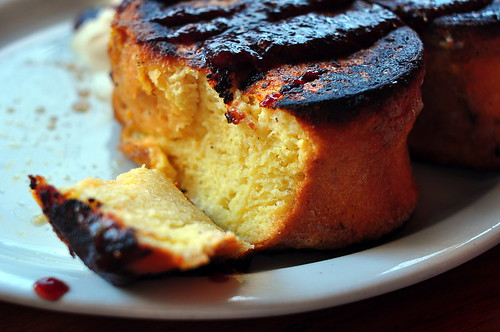 On my first visit to Canelé on a sunny Saturday morning, I was joined by The Astronomer, Mattatouille, and D takes a B. Although we each gave the brunch menu a cursory glance, all of us knew good and well that the famed French toast ($7.50) would be ours. For an additional $2.50, it came adorned with marscapone and figs. 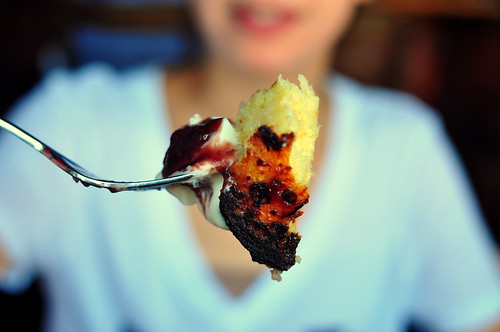 When my plate of French toast arrived, my jaw dropped to the ground. I couldn’t believe that a single serving entailed three massive slices, each of which were two-inches deep and weighed in at half a pound. I had never been so intimidated by French toast before! With a fork and a sharp knife in hand, I dug right in. I loved that the the bread was perfectly seared on the outside and silky smooth, almost custardy, within. The marscapone and figs were outstanding complements. Canelé’s French toast is regarded by many as one of Los Angeles’ finest, and I wholeheartedly agree. 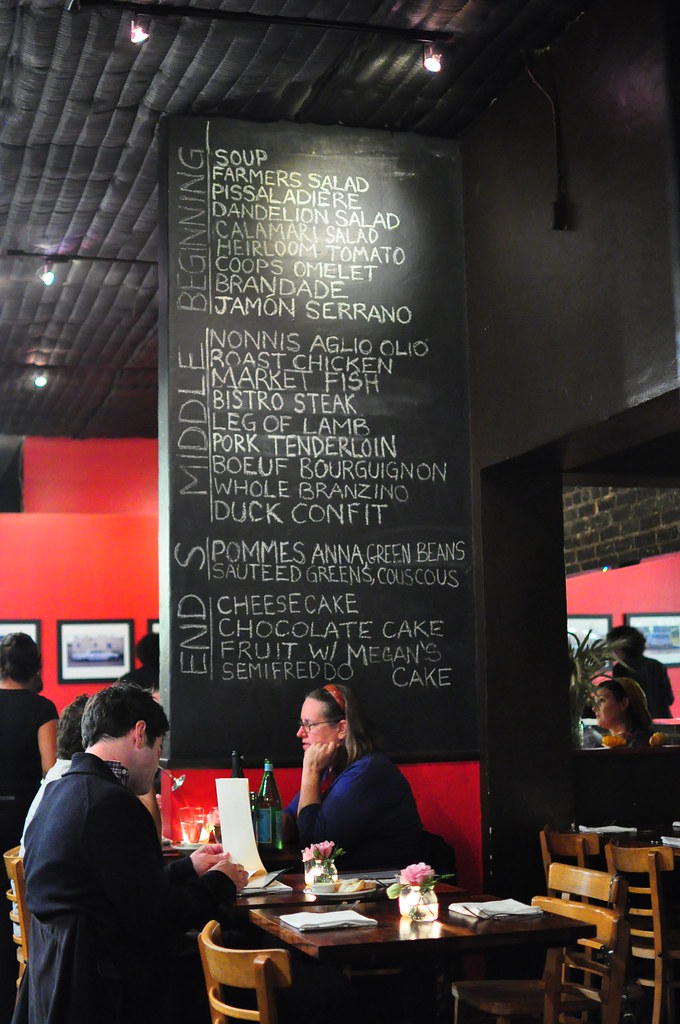 I returned to Canelé several weeks later for Friends Cook Night, a periodic event where friends of the restaurant are invited to create and execute a unique menu. My friend Jessica Koslow of eat.sip.chew. took over the restaurant’s stoves in early October to prepare a three-course dinner featuring local ingredients.  Jessica recently moved to Los Angeles from Atlanta, where she worked as a pastry chef at Bacchanalia. 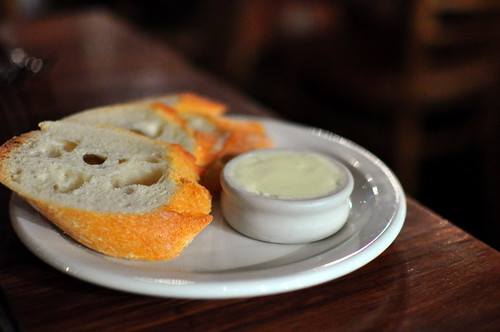 Dinners at Canelé begin with complimentary bread and butter. The crusty white bread was adequate, but the butter was cold and hard. I prefer butter at room temperature, especially when served alongside bread. 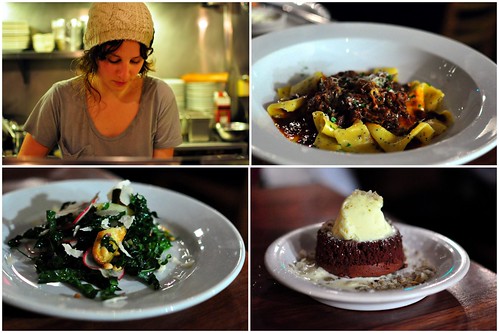 Jessica’s three-course meal ($35) was phenomenal. The first course was a Cavolo nero salad with preserved Meyer lemons and fingerling potatoes Provençal, the second course was handmade poppy seed pappardelle with lamb and wild mushrooms in a porter ragu, and the final course was a Valrhona 66% caribe torino made with free range eggs and homemade vanilla bean ice cream with pumpkin seed brittle.

Best of all, the number of food miles that made this meal possible was kept in check. The lamb came from Niman Ranch, the mushrooms from Lili Bih Shan (Cerritos and Long Beach Farmer’s Markets), the eggs were from Silver Lake urban farmers John Whitton and Erin Burrell, and the preserved Meyer lemons from San Pedro urban farmers Steve and Melissa Griswald. 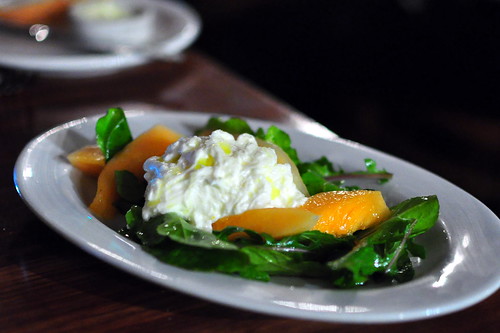 To supplement Jessica’s menu, The Astronomer and I shared an arugula, melon, and burrata salad ($8) from Canelé’s specials menu. The pairing of ripened cantaloupe with burrata was glorious. 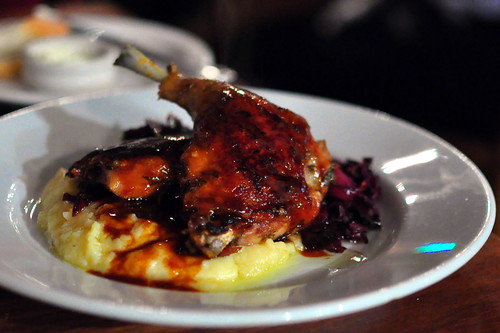 We also ordered a plate of duck confit with parsnip mashed potatoes, red cabbage, and plum sauce ($20). The duck had a fantastic sear and its meat was fall-off-the-bone tender. The potatoes and cabbage gave the dish a homey and comforting quality. 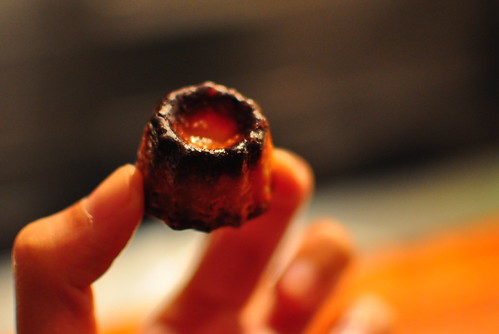 As we headed out the door, The Astronomer and I were each presented with a tiny canelé, a French pastry with a soft and tender custard center and a dark, thick caramelized crust. 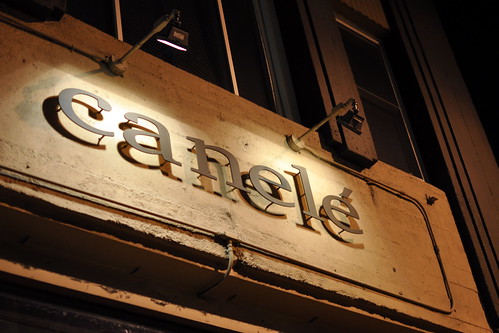 I returned to Canelé a third time with the Eat My Blog committee (Laurie, Diana, and Anjali). We were weeks away from the big day and needed to discuss the finer details over a hearty meal in a quiet space. 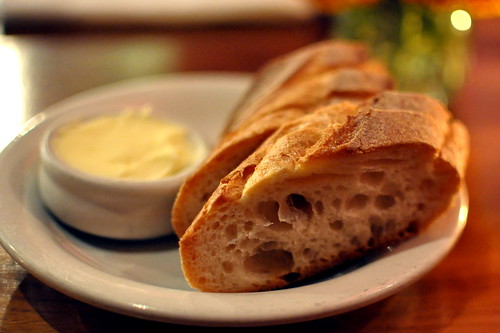 We were all starving once we were seated and quickly mauled the bread and butter. Once again, the butter was disappointingly cold. 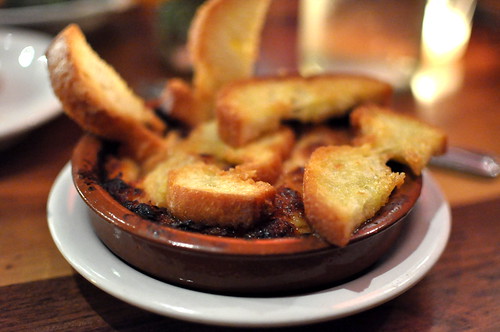 For my appetizer, I took Anjali’s advice and ordered the brandade with tomato confit and toast ($10). The brandade, an amazing combination of of salt cod, olive oil and milk, arrived bubbling in its vessel and smelled unbelievably great. The savory and cheesy mixture was at its best slathered atop the buttery slivers of toast. 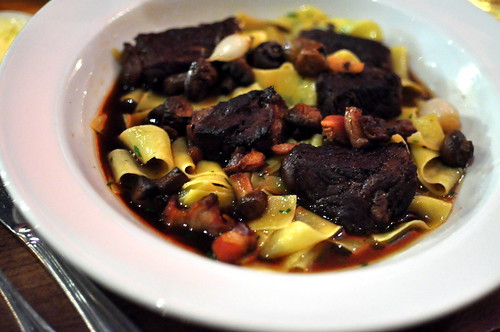 For my main course, I settled on the boeuf bourguignon with buttered noodles ($22). This dish was easy to love because stewed meat and tender noodles are an unstoppable paring. The tiny mushrooms, pearl onions, and salty bacon kept me captivated when I was all beefed-out. 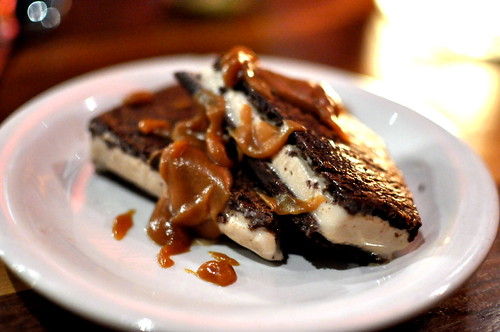 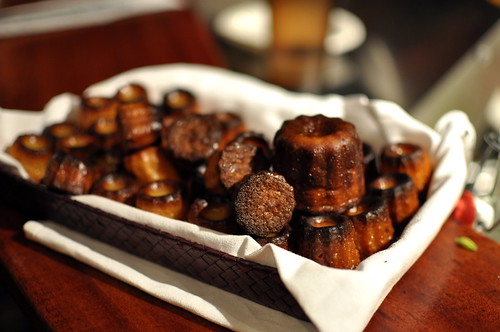 Canelé is a solid restaurant that consistently churns out food ranging from very good to great. Service is mostly friendly and always adept. In this particular case, I can’t say that multiple visits added any real insights about Canelé that I would not have been able to gather from one meal. However, the opportunity to explore the menu in depth cannot be discounted.