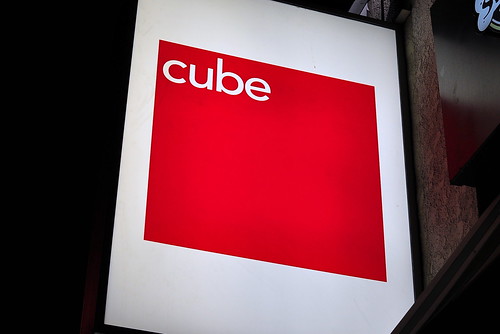 Since my mom and her friend David drove all the way from San Diego to show their support for the Eat My Blog charity bake sale, a restorative meal together was definitely in order. For convenience’s sake, we stayed in the WeHo vicinity and supped at Cube, a favorite among my food blogging comrades D takes a B and Dishing Up Delights.

Founded by Alex Palermo, Cube was originally a small pasta venture called Divine Pasta Company. As demand for the handmade noodles spread, the business evolved into a store specializing in artisan products including the company’s signature pastas and ravioli. The “marketplace” eventually grew into Cube, a cheese bar and full-service restaurant serving traditional Italian cooking with a strong Californian influence. These days, all three operations are run under one roof on La Brea Avenue. 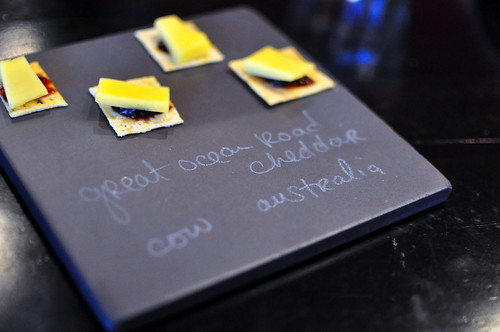 After our party of four was seated, we were presented with lunch menus; since we were dining at the awkward hour of 4:30 PM, the kitchen had not yet transitioned to dinnertime offerings. The menu included panini in addition to Cube’s staple items formaggi e salumi, zuppe, insalate, antipasti, pizze, primi, secondi, and contorni.

Samples of Great Ocean Road Cheddar, a cow cheese from Australia, were presented on a square slate as we perused the menu. 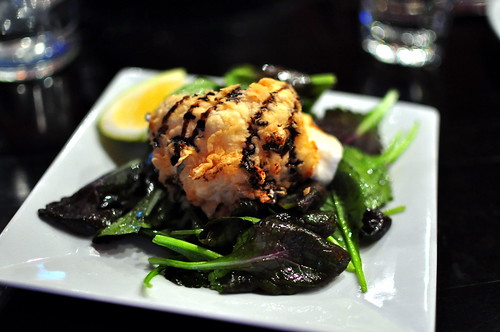 We started off with three appetizers, all chosen by me—I love it when my dining companions give me full reign over their stomachs, allowing me to order whatever suits my fancy. The first to arrive was the burrata en carozza ($13) with charred tomatoes, Osaka mustard greens, and a wedge of fresh lemon. The battered and deep-fried burrata had a crust that reminded me of the Colonel’s original recipe and decadently oozy innards. I can’t say that battering and frying improved the natural deliciousness of the burrata, but it was a highly palatable experiment. 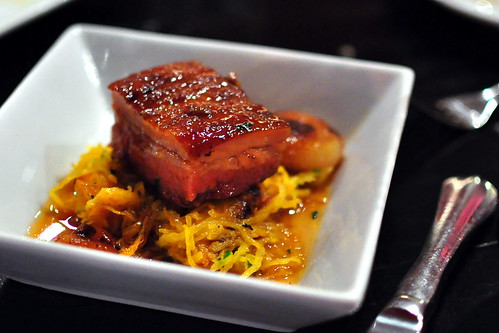 Everyone’s favorite dish of the meal was the maple braised bacon ($10) with roasted cipollini onions and spaghetti squash. The hunk of pork tasted positively sweet; the brown sugar and maple syrup marinade harmonized easily with the salty and tender meat. The strands of spaghetti squash, saturated in sweet and fatty juices, were divine. 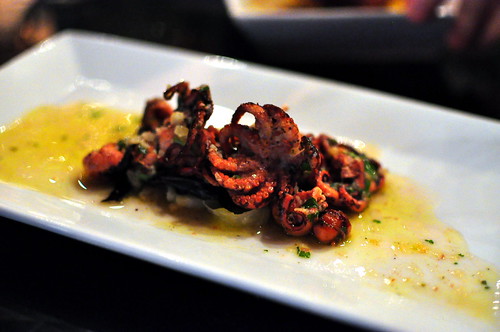 The final appetizer, a braised baby octopus ($8) with charred radicchio and cipollini onion marmelata, was competent but a snooze. The tentacles were overly chewy, while the dressing tasted too similar to the one used on the burrata. 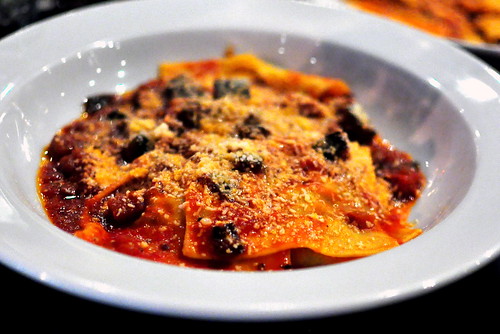 For our entrees, I chose two pasta dishes. The braised lamb shank ravioli were sauced with an eggplant and San Marzano tomato ragu and accented with crispy eggplant and Pecorino ($16). The pasta pockets, four in all, were tender to the tooth and fairly well stuffed. The weakest component of the dish was the San Marzano tomato sauce, which everyone found too tart. The slightest shake of salt and an ever-so-light sprinkling of sugar would’ve made a world of difference. 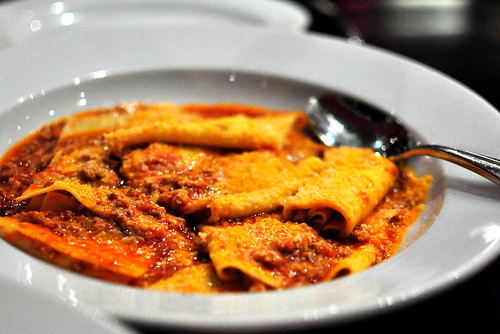 The fresh sfoglia with pork ragu and red cow Parmesan ($12) was simply wonderful. The extra-wide sheets of noodles paired beautifully with the satisfyingly meaty ragu. If sfoglia were more readily available, it would surely surpass pappardelle as my favorite pasta shape.

Our dinner at Cube was certainly good, but it left us feeling somewhat unsatisfied since two of the five dishes we ordered fell into the ho-hum category. We contemplated ordering more food to make up for the disappointments, but decided to cut our losses and head elsewhere for round two. Mother had an inexplicable craving for a chili cheese dog, and you know what that means…