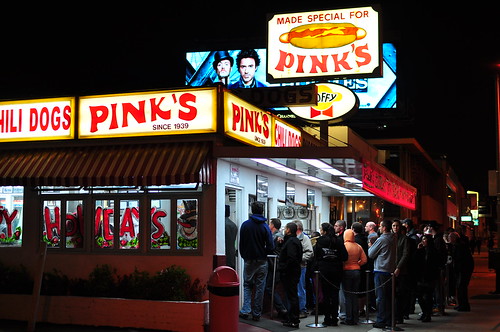 After supping on small plates at Cube, my mother desired a little something else to top off her evening. While visions of cupcakes dolloped tall with frosting were dancing in my head, my mom was dreaming of chili cheese dogs with thick squiggles of yellow mustard. Since Pink’s Hot Dogs was located only 469 feet away, I curbed my sweet tooth and we headed for the bright lights and lengthy lines—It was time to experience a Los Angeles institution.

Paul Pink started his hot dog stand, a large-wheeled pushcart to be exact, in 1939. He outgrew the hot dog wagon in 1946 and traded it in for a small building that was constructed on the same spot where the wagon stood. For the past 70 years, locals and tourists alike have been queuing up and patiently waiting for a taste of Mr. Pink’s famous hot dogs. Oh, the power of hype and nostalgia! 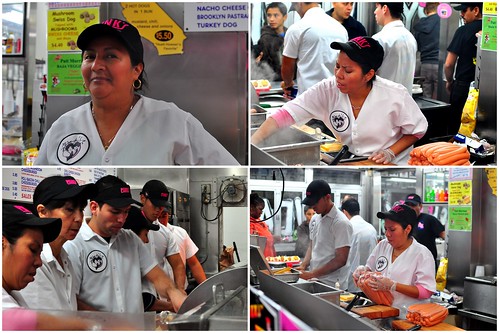 As we approached the culinary landmark, we were all wondering how long of a wait we’d have to endure. It’s a good thing we had eaten at Cube beforehand, because it ended up taking an hour from the moment we lined up to the moment we sat down to eat. Interestingly, Pink’s website notes that “an average Pink’s chili dog can be ordered, prepared and delivered to the customer in less than 30 seconds!” Damn those specialty hot dogs for holding up the line. 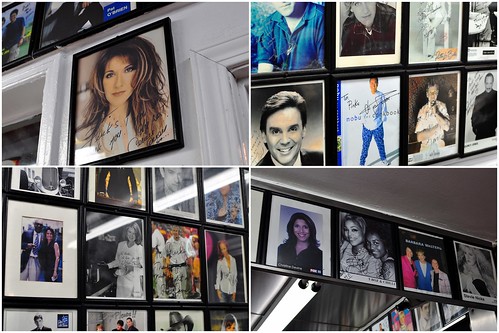 I had high hopes for Pink’s after seeing the wall of celebrity endorsements in the restaurant’s dining room. Everyone from Celine Dion to Nobu and Gordon Ramsay were bestowing heaps of praise upon the wiener shack. Of all the famous faces adorning Pink’s walls, I was happiest to see Martha Stewart smiling down on me—the woman has impeccable taste. 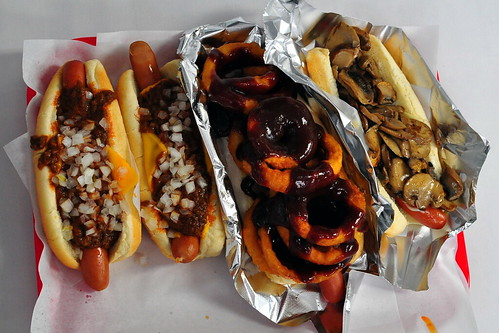 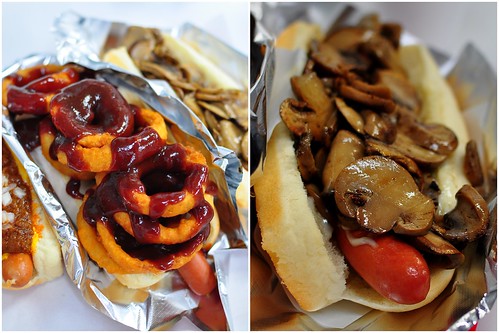 The Astronomer’s Lord of the Rings was comprised of a 10-inch hot dog topped with onion rings and drenched in tangy barbecue sauce. It was impossible to consume the wiener as the chef envisioned it without looking like a caveman, so The Astronomer removed the rings and ate them on the side. [He also devised another rather ingenious mode of delivery.] The hot dog was so super-saucy that The Astronomer had to wipe off the excess barbecue sauce with napkins in order for it to taste palatable. Gross.

David was most pleased with his Swiss cheese, mushroom, and mayonnaise hot dog. I wanted to steal a bite, but didn’t want to disrupt his dream-like state. 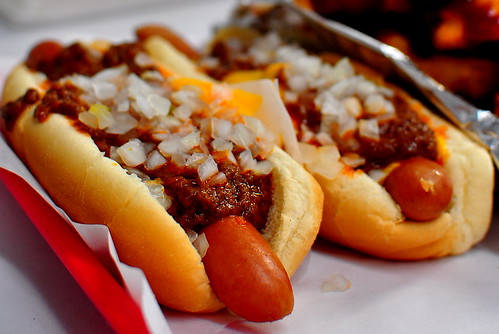 My mother and I pretty much felt the same way about our chili cheese dogs—indifferent. The chili lacked the heartburn-inducing kick that we were hoping for, while the cheese was strangely tasteless. The extra-long hot dogs had a decent snap, but their flavors were hardly robust. Overall, we felt that Pink’s most famous creation was sadly lackluster. When I indulge in good ‘ol American junk food, I want to be overloaded with salt, grease, fat, and flavor. Pink’s brought the grease and fat, but didn’t pack the punch where it counted most.

I really wanted to count myself among the legion of Pink’s devotees, but the product just didn’t move me.