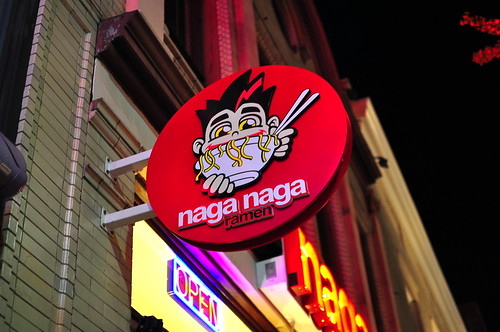 I was stoked this past summer when Brigham Yen reported that a ramenya was arriving in Old Pasadena. Even though I love to hate on my resident city’s dining scene, I’m always hopeful that solid independent eateries will eventually take over the awful chain restaurants crowding the neighborhood. I intended to dine at Naga Naga Ramen during the early days following its grand opening, but after reading some lackluster reviews, I quickly lost interest in noodling in my ‘hood.

My friend and fellow Pasadena resident Laurie recently made a good case for giving Naga Naga a go. She and her husband had dined there one evening and found the offerings not only palatable, but worthy of raves and daydreams. Laurie’s enthusiasm convinced my skeptical and hesitant self that Naga Naga was worth investigating, so The Astronomer and I met up with her before the holiday rush to slurp our hearts out. 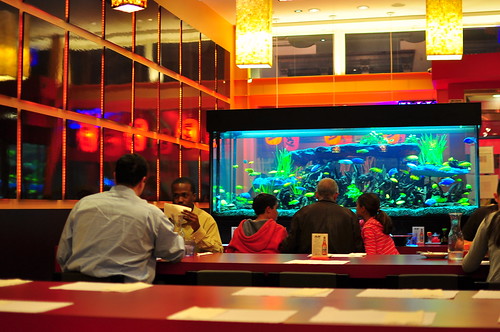 Naga Naga is owned by John Mekpongsatorn, a Thai-American who was born and raised in North Hollywood and currently resides in Monterey Park. In addition to two Naga Naga outlets, Mr. Mekpongsatorn is also the owner of Noodle World, a local chain serving a hodgepodge of Asian noodle dishes.

According to the restaurant’s website, “Naga Naga” is slang derived from the Japanese word nagai, meaning long. It is believed in many Asian cultures that eating long noodles symbolizes having a long life. 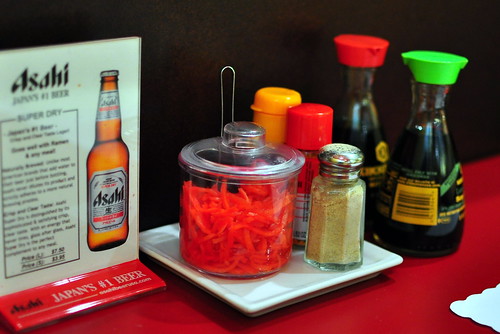 The vibe at Naga Naga is clean, colorful, and modern. Each table is outfitted with a jar of pickled ginger, a shaker of white pepper, two types of soy sauces, S&B chili pepper, and La-Yu chili oil. 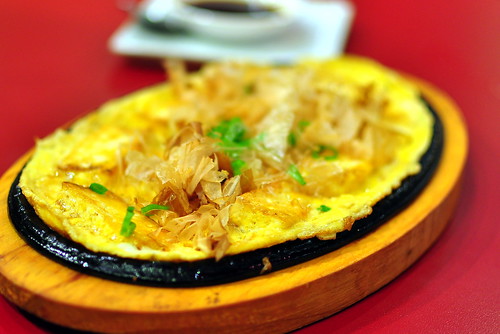 To start, we shared an order of Naga Naga tofu ($6.95). The tofu was served on an iron skillet with eggs, green onions, and bonito flakes. The dish’s flavors were mild, bordering on bland. A sprinkle of chili oil and chili pepper added a much-needed kick to the tofu. 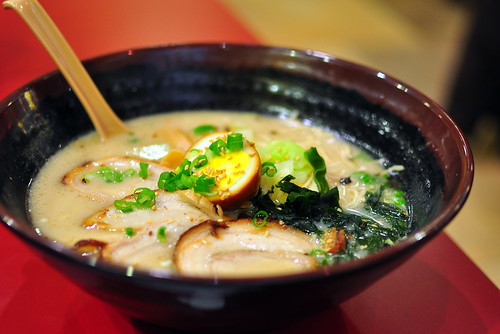 The Astronomer’s Naga Naga Ramen ($7.50) included sliced barbecued pork, seaweed, bamboo, cabbage, and half a boiled egg. The straight ramen noodles, which were purchased from the same supplier as Torrance’s Shen Shin Gumi, had a great bite to them and provided an excellent vehicle for the Tonkatsu broth to cling on to. The broth was competent in its porkiness, but not as swoon-inducing as the one I sampled last fall at Ippudo in New York City. 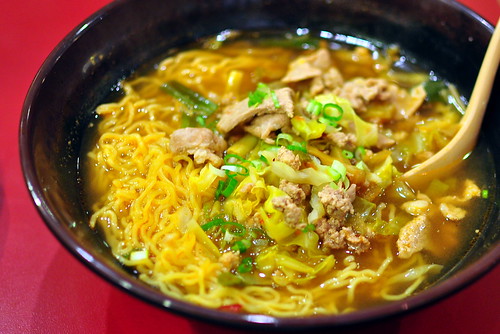 Laurie and I both went with the Tan Tan Men ($7.95) from the “Revolutionary Ramen” section of the menu. Other non-traditional ramen offerings included a Korean-influenced kimchi ramen and a Thai-influenced tom yum ramen. The Chinese-influenced Tan Tan Men included pork slices, ground pork, shredded cabbage, Chinese pickles, and curly ramen noodles in a hot and sour soup.

Laurie fell head over heels for the Tan Tan ramen after her first visit to Naga Naga, and it was easy to taste why. The broth had a pleasant sourness that reminded me of Vietnamese canh chua. The ground pork, cabbage, and plethora of Chinese pickles kept the bowl of noodles exciting through and through. The Tan Tan ramen certainly wasn’t authentic, but it was quite appealing in its bastardization.

Welcome to the neighborhood, Naga Naga.