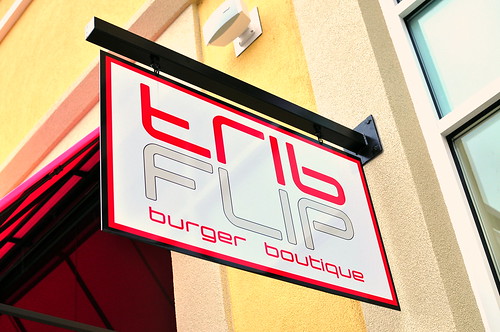 Thanks to Chef Richard Blais, molecular gastronomy and fancy hamburgers, two of the restaurant world’s most exciting trends, can now be found down South. After the success of Blais’ original Flip Burger Boutique in Atlanta, a second location was opened in Birmingham late last year.

I initially found the idea of a burger “boutique” kind of laughable, but once I saw where it was located—within a mega suburban strip mall and next door to Juicy Couture and Gloss Premium Denim—it all made sense. Now, if this isn’t an agglomeration economy designed with the painfully hip and sassy in mind, I don’t know what is. 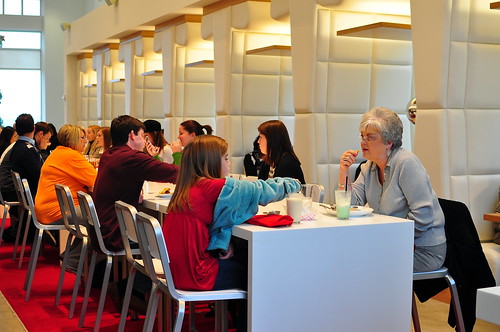 Chef Blais, who was the runner-up on season four of Top Chef, is trained in classic French cookery but likes to dabble in modern techniques as well. He has studied under culinary luminaries Thomas Keller, Daniel Boulud, Alice Waters, and Ferran Adria.

At Flip, the humble hamburger is transformed from a grease bomb into an edible work of art. “We only have two rules,” said Chef Blais in an interview with The Birmingham News. “One is that whatever we call a burger has to be ground. That doesn’t have to be beef. It can be another meat or it can be vegetable or it can be seafood. The other rule is it has to be served on a bun.” With chorizo, lamb, and crab sharing menu space with Wagyu beef, the restaurant fully lives up to its slogan “Fine Dining Between Two Buns.” 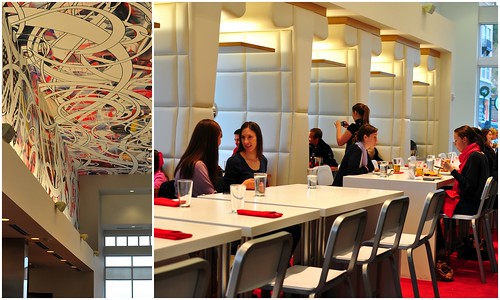 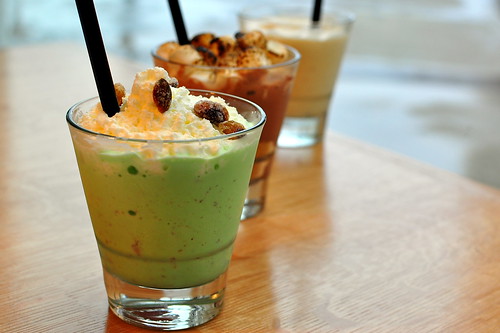 Lunch began with a bevy of Flip’s famous liquid-nitrogen milkshakes. Our back-of-the-house homie Sara sweet talked the milkshake maker into sending over small samples of each of the flavors on offer in addition to the ones that we ordered. The ice cream used in the milkshakes was frozen using liquid nitrogen, which resulted in a texture that was ultra-thick and velvety. As a bonus, wispy plumes of smoke emanated from the cups, bringing a bit of drama to the table.

The pistachio and truffle milkshake was my favorite of the four flavors that we tried. The unmistakable essence of truffle permeated the entire glass. The Astronomer, Rosalind, and Miho all adored the super-sweet Krispy Krème milkshake, which contained actual bits of doughnut matter. The Nutella with burnt marshmallow milkshake was perfectly chocolaty and had an appealing layer of graham cracker crumbles at the bottom of the glass. The infamous foie gras milkshake was palatable but tasted more of nutty amaretto than rich liver; it also left a strange film on our tongues. 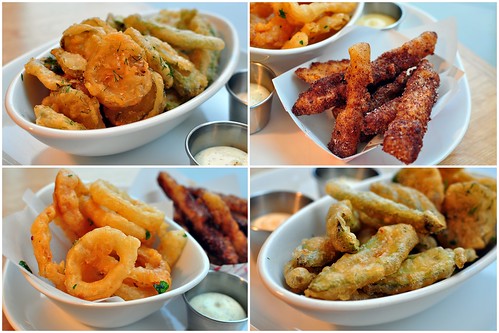 To balance out our milkshakes’ sweetness, we indulged in a variety of savory fried foods. The vodka battered onion rings with beer honey mustard ($3.50) were light and not the least bit greasy. The tempura fried okra with Sriracha ranch ($3) were expertly fried and had an ideal ratio of vegetable to batter. The fried B&B pickles with buttermilk ranch ($2) were sprinkled with fresh dill and had a great snap to ’em. The tempura sweet potato fries with chocolate salt ($4) were straight-up fabulous. Sweet and salty pairings always win my heart. 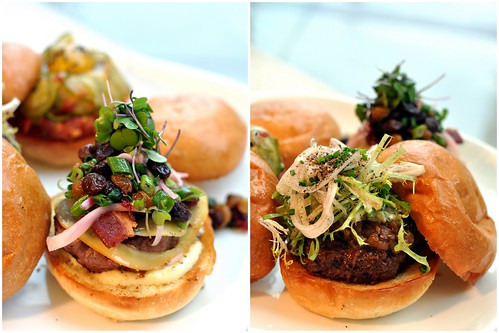 Our party of four ordered three burgers to share. The Wild Turkey burger (left) with Benton’s bacon, wild turkey glaze, smoked mayo, raisin scallion relish, and micro greens ($6.50) came highly recommended by Sarah and was my favorite of the three. Once again, I was seduced by the sweetness of the relish, coupled with the salty savoriness of the bacon and turkey. The toasted brioche bun held onto the contents well.

The Astronomer chose the Butcher’s Cut burger with caramelized onion, blue cheese, and red wine jam ($7), which was the sole beef burger of the bunch. Cooked medium-well, the meat’s flavor was passable, but not exceptional. With the Butcher’s Cut, the focus was more on bells and whistles rather than the quality of the meat. Next time around, I’d like to try the Farm burger with organic, grass-fed beef to see how it compares. 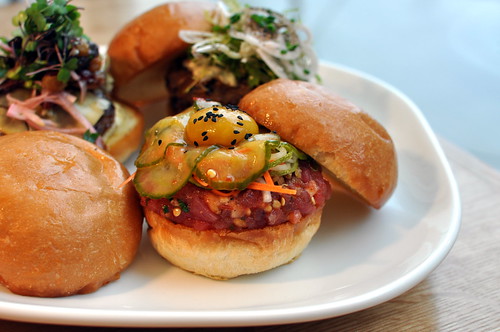 Our final selection was the Burger of the Day, a tuna tartare burger ($10) made with sushi grade tuna, wasabi mayo, pine nuts, Asian pear, cucumber, and mango yolk. While not a menu mainstay, the tuna tartare burger was excellent nevertheless. We all appreciated its light and fresh flavors. The mango yolk provided a subtle sweetness and lots of intrigue. 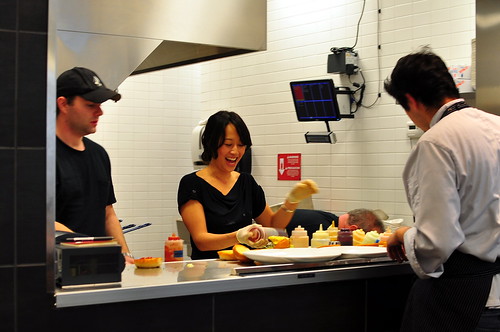 After we finished our lunch and paid our tab, we gathered near the open kitchen to see Sara doing her thang. Make sure to say hi to her when you dine at Flip. She’s lovely.