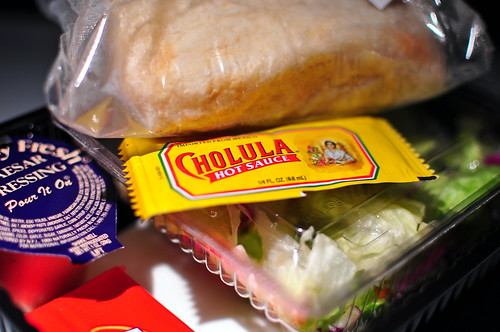 It’s been years since a warm meal has been set before me while flying coach in America’s friendly skies. Ever since domestic airlines eliminated hot food service in order to cut back on costs, bags of peanuts, pretzels, and crackers have been all I’ve had to look forward to during long hauls from coast to coast. Even though American mile-high meals were never nearly as tasty as their Asian counterparts, it was kind of nice having a dried-out turkey sandwich to nosh on while digging into the latest Sky Mall. 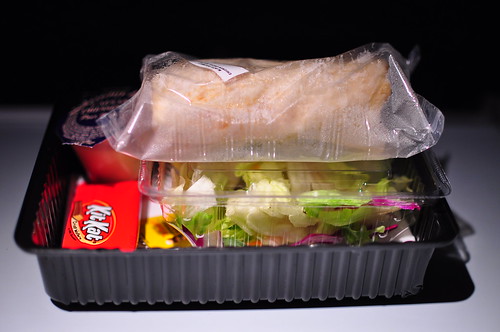 The Astronomer and I prepared for the impending food drought on our recent flight home from Alabama by picking up a three-item combo from Panda Express. We were hoping that the hefty Styrofoam box filled with greasy goodness would provide enough sustenance to get us back to the West Coast without any hunger pangs. Little did we know that while we were scarfing down fried rice, Beijing beef, and orange chicken next to our gate, in-flight dinners were being loaded onto our plane. 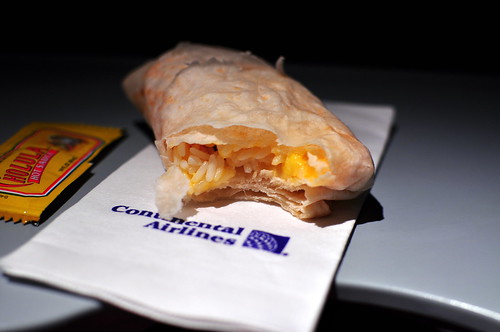 I was utterly shocked when a tray of food was given to me by the flight attendant during the first hour of our flight. Even though I was stuffed full of Chinese food, I was inexplicably excited to sample Continental Airline’s offerings. Well, at least some of them.

The anemic iceberg salad and its accompanying Caesar dressing were quickly passed on to The Astronomer. The leaves were a sickly pale green and the dressing contained too may foreign ingredients. The main course, “Aldo’s Gourmet Chicken Enchilada Wrap,” was served hot and steamy. I removed the enchilada from its plastic bag and laid it to rest upon a napkin to allow the excess moisture to evaporate. After the tortilla had regained its texture, I dug in.

The wrap tasted no better or worse than a frozen burrito. The exterior was thick and chewy, while the innards were mostly cheesy. The packet of Cholula hot sauce was essential for spicing up the package. Although it wasn’t great, Aldo’s Gourmet Chicken Enchilada Wrap sure beat the usual spread of peanuts, pretzels, and crackers. 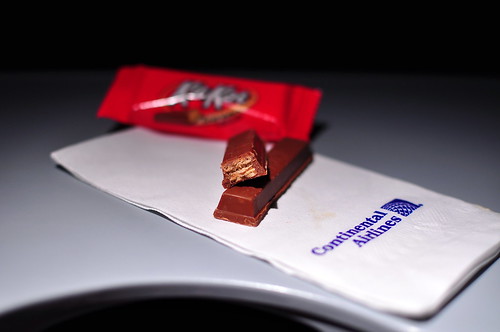 For dessert, a snack-size serving of a Kit Kat bar. Thanks for trying, Continental Airlines.