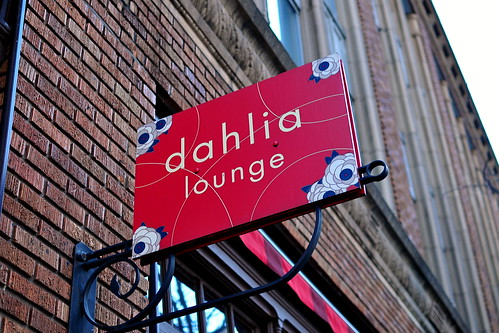 It was a given that The Astronomer and I would dine at one of  Tom Douglas‘ restaurants during our stay in Seattle. With six acclaimed eateries to choose from (Dahlia Bakery, Dahlia Lounge, Etta’s, Lola, Palace Kitchen, Serious Pie), the difficulty was narrowing the list to a manageable number. We met up with The Astronomer’s sister Rosalind at Dahlia Lounge for our first dinner in the city.

The first of Chef Douglas’ restaurants, Dahlia Lounge put Northwest cuisine on the map by embracing the region’s bounty while incorporating global flavors and styles. Even though Chef Douglas’ newer ventures currently have more buzz surrounding them, a meal at his twenty-year-old flagship seemed essential for understanding his culinary philosophy. 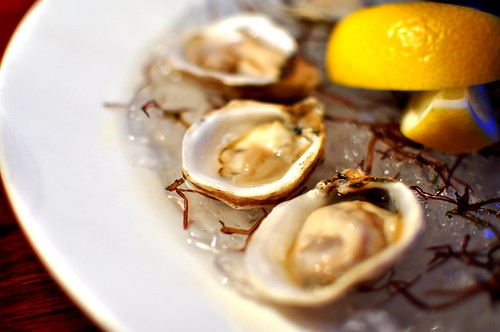 Our party of three was seated straight away in a booth toward the back of the restaurant. As we were skimming our menus, a waiter stopped by and dropped off a plate of oysters on ice. As luck would have it, the resident shucker had jumped the gun, and as a result, we enjoyed half a dozen Kushi oysters from Taylor Shellfish Farms ($15) on the house. The petite oysters were wonderfully sweet and tasted even better with a drizzle of daikon mignonette. 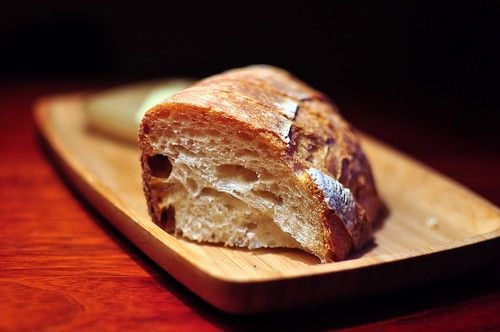 A loaf of Dahlia Bakery’s crusty white bread with salted butter arrived after we placed our orders. Rosalind took a particular liking to the combination. 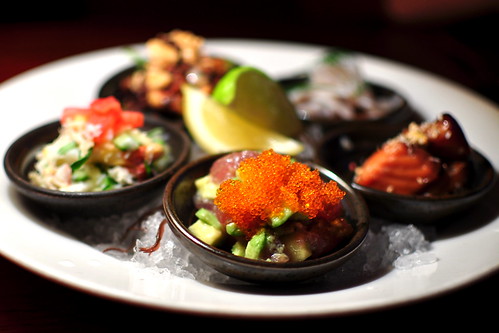 All of the dishes were fresh and beautifully composed, but their flavors didn’t  pop. The Astronomer felt that every dish contained one offbeat ingredient that held it back from fully mesmerizing our taste buds. The best of the bunch was the steak-like smoked salmon that was delightfully salty, while the worst of the pack was the floral-infused Ahi. 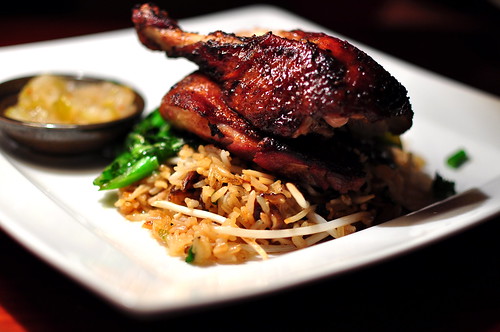 While we didn’t score with the starter, we certainly did with our entrees. Rosalind’s rotisserie roasted five-spice duck with mushroom fried rice, gai lan (Chinese broccoli), and pear jam ($28) hit all the right Asian-inspired notes. The serving of duck was so generous that it bordered on intimidating. The pear jam balanced out the slightly over-salted meat superbly. 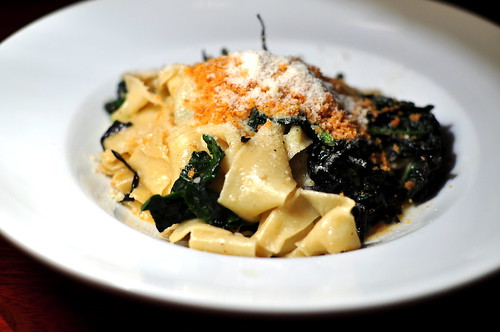 Even though my head said to order something quintessentially Northwestern like salmon, my heart was set on the handmade pappardelle with black trumpet mushrooms and buttered Lacinato kale ($19). Each noodle was luxuriously long and perfectly al dente. Sprinklings of toasted bread crumbs and Parmesan Reggiano brought some lovely texture to the plate. Who knew venturing to the vegetarian side of the menu would be so delicious? 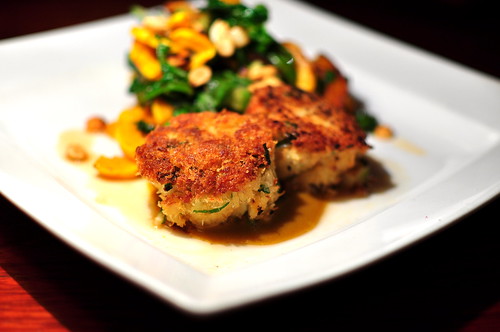 The Astronomer loved his lemon-scallion Dungeness crab cakes with curried groundnut squash, peanuts, and greens ($29) through and through. The plump little cakes were full of meat and not filler, while vegetables offered an ideal complement to balance out their richness. Rosalind and I liked the lemon-scallion sauce quite a bit. 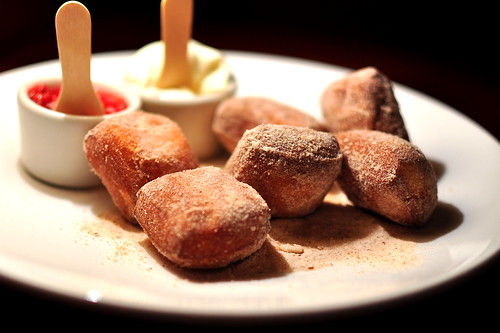 The highlight of our meal came at the end. Even though The Astronomer and I had eaten doughnuts for breakfast at Top Pot earlier in the day, we could not resist ordering more for dessert. Fried to order and dusted with cinnamon and sugar, the doughnuts ($8) were unbelievably pillowy. Truly, the lightest doughnuts I’ve ever eaten. We generously slathered each one with rhubarb jam and vanilla mascarpone.

Our meal at Dahlia Lounge got off to a slow start, but by the end we were completely smitten—the transformative powers of fresh noodles and fluffy doughnuts cannot be underestimated.