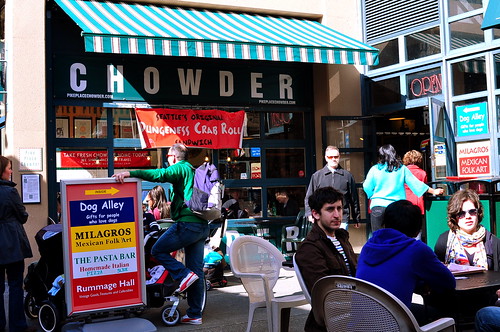 I was so caught up in doughnut fever yesterday that I totally forgot to recount the cream bath that The Astronomer and I soaked in earlier in the day. Following breakfast at Top Pot Doughnuts, we headed to the bustling Pike Place Market for lunch. Pike Place Chowder came highly recommended to us by The Astronomer’s mother and sister. The Chaplin women know good food, so we were certain that this place was going to be fantastic. 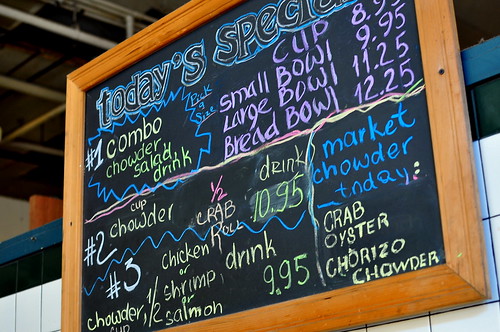 Hidden away on Post Alley, Pike Place Chowder is a small operation with eight chowders and only twenty seats. Although we were tempted by the Dungeness crab roll, we ultimately decided to stick with the house special.  After procuring a four-cup chowder sampler ($10.45), The Astronomer and I settled down on the patio to soak in some sun while slurping our soups. 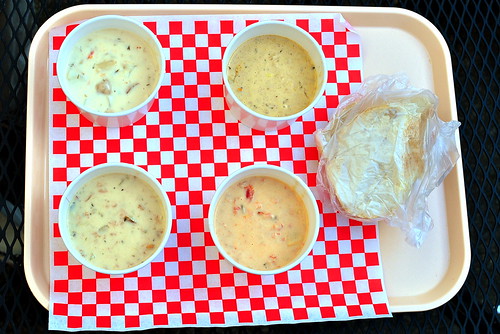 With a little help from the man behind the counter, we chose the classic New England-style clam chowder, the seafood bisque, the seared scallop chowder, and the daily special market chowder. Two slices of warm and crusty sourdough were served on the side.

It wasn’t surprising that all four chowders were superb. The market chowder was awesomely spicy with bits of chorizo, oysters, and crab. The award-winning clam chowder was rich and smoky thanks to the liberal employment of cream and bacon. The seafood bisque had delicate undertones of tomato and basil and was packed with salmon, cod, squid, and shrimp. And the seared scallop chowder was a beautiful blend of fresh dill and lime juice.

Whereas chowders I’ve eaten in the past offered little more than blunt blasts of cream to my taste buds, the ones at Pike Place Chowder were well-crafted, with distinct personalities and subtle nuances. I’ve always fancied myself as a broth-based soup kind of gal, but this experience has me seriously reconsidering.