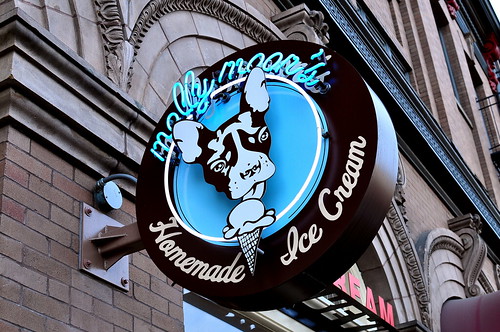 As fate would have it, a week before my trip Serious Eats posted about a Seattle-based shop that served ice cream for breakfast. I generally have no desire to eat the cold and sweet stuff anytime before noon, but the chance to go against my sensibilities proved too enticing to pass up. On our second morning in the city, The Astronomer and I met up with Rosalind at Molly Moon’s in Capitol Hill. Even though we felt a little naughty indulging in dessert for breakfast, we proceeded into the shop anyway. 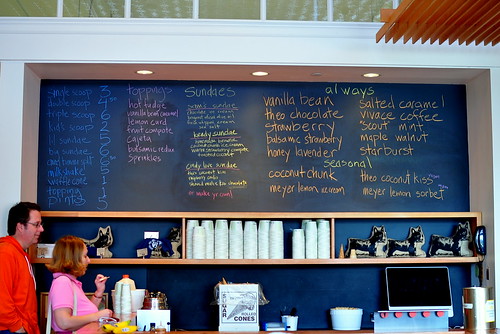 Molly Moon Neitzel has been serving artisanal ice creams and sorbets to discerning Seattleites since the spring of 2008. She currently has two stores in the city and is hoping to open additional posts in the future.

The rainbow of flavors served in her shops are all made using cream from local cows and fruits and herbs grown nearby. Even the chocolate that’s used in the shop is from a Seattle-based company, Theo Chocolate. During our visit, salted caramel, “scout” mint, and Starburst all caught my eye. 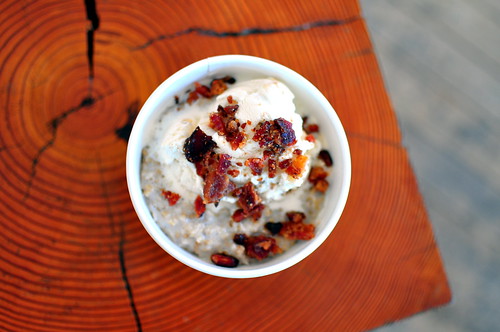 The flavors on offer sounded delightful, but we kept our eyes on the prize and ordered ice cream for breakfast ($6). The off-the-menu treat was comprised of a cup of steel-cut oatmeal  topped with a scoop of maple bacon ice cream. It also included unlimited access to the toppings bar where all the mixed berries, candied ginger, and candied bacon I desired could be had. 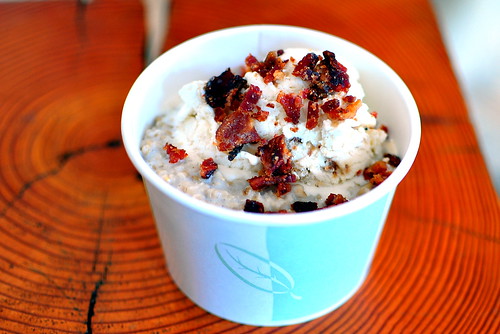 What I liked best about this unusual concoction was the intense contrast between the frozen ice cream and hot oatmeal. When the two opposing fronts collided in my mouth, a storm of goodness was inevitable. I also liked how the presence of whole grains assuaged any guilt I had for consuming such a decadent little number. The only thing that could’ve made this creation even better would have been saltier and smokier bacon, both in the ice cream and scattered on top. The sweet and savory interplay that I was hoping for was totally missing.

Eating ice cream for breakfast was definitely a fun diversion from the usual bananas and cereal, but not crazy-delicious enough to partake in on a regular basis. After we left the shop, we went straight to the grocery store to procure some fruit.