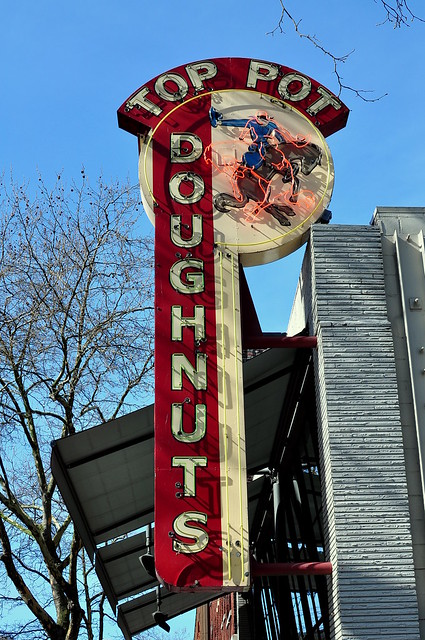 I’ve always liked doughnuts quite a bit, especially the ones made by Glendora’s Donut Man and New York City’s Doughnut Plant. However, it wasn’t until I explored Seattle’s boutique doughnut scene last week that my affections shifted from like to love. Love is an awfully strong word, and I mean it one-hundred percent when it comes to expertly fried dough. 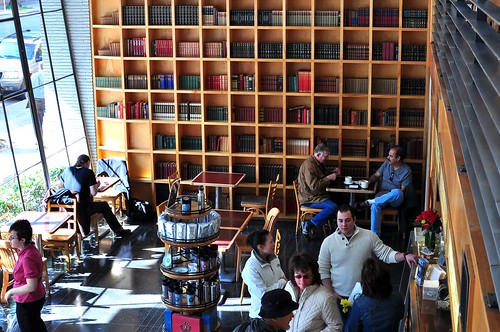 There’s an artisanal doughnut movement brewing in Seattle, and Top Pot Doughnuts is leading the way. The first shop opened in 2002 and four more were established thereafter. The Astronomer and I visited the downtown location on our first morning in the city.

Whereas Los Angeles’ neighborhood doughnut shops are usually housed in cramped and dingy quarters, the ones we visited in Seattle were bright (weather permitting), well-appointed, and spacious. At Top Pot, huge shelves containing encyclopedia volumes lined the walls, while a glorious window spanned the entire entrance. As is the norm in these here parts, the shop offered free wi-fi and plenty of comfy seating. 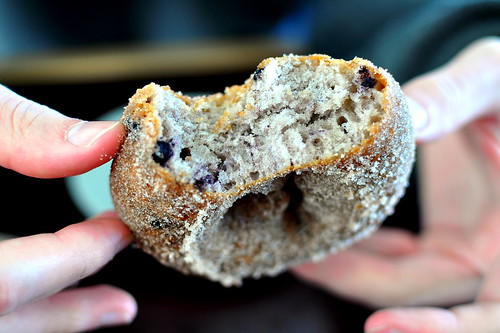 Top Pot makes more than forty varieties of “hand-forged” doughnuts. Each one is made from scratch and trans-fat free.  After purchasing our goods on the first floor, we hoofed it upstairs to enjoy them. The Astronomer’s blueberry cake doughnut with cinnamon sugar ($1.49) had lovely hints of both spice and fruit. Its texture was pleasantly dense and infinitely superior to regular cake, according to The Astronomer. 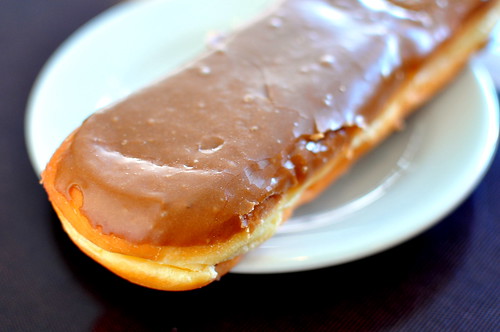 Stretching nearly a foot long, my maple bar ($1.49) was a delicious bomb of fried dough slathered in crackly frosting. The doughnut’s texture wasn’t particularly light, but it had a pleasing chew that I found very satisfying. The real-deal maple glaze was just the thing to smooth out the bar’s oily undertones.

It’s been fun cupcakes, but gourmet doughnuts have officially edged you out as my favorite  sweet indulgence.