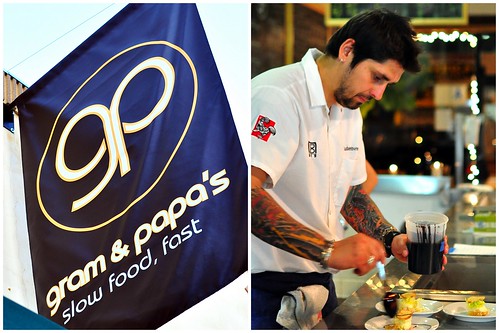 Chef Ludo Lefebvre is a rock star. For starters, he doesn’t play by the brick and mortar rules. He pops up whenever and wherever he pleases,  keeping diners firmly on their toes the entire time.  Furthermore, when the chef unveils his chosen venue and releases dates, every seat in the house sells out within hours. Reservation systems have been known to malfunction due to his popularity. Not to mention, the man has more groupies than David Bowie does. His most devoted fans drop in several times a month and are sure to have their menus autographed afterward. 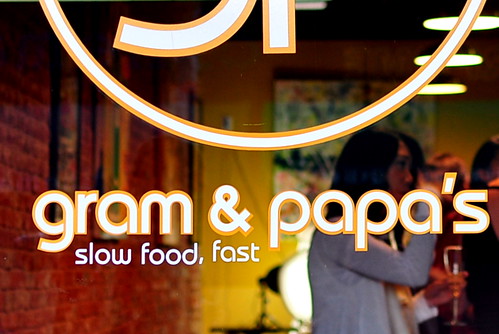 After bringing down the house at Royal/T last December and at BreadBar before that, Chef Ludo has set up shop at Downtown’s Gram & Papa’s. His two month engagement officially begins today and runs through May 28. Fortunately, I was one of a few lucky bloggers invited by Fooddigger to sit down for a sneak preview the evening before LudoBites 4.0‘s debut. 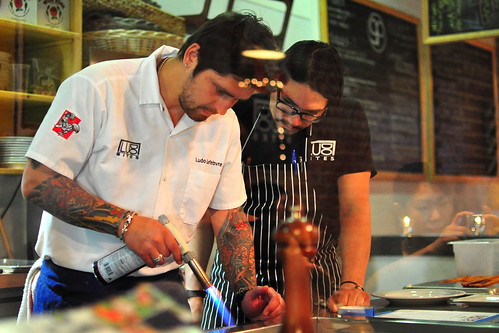 The new space is incredibly intimate. Every seat in the house offers a perfect view of the open kitchen, redefining the boundaries between diners and chef. 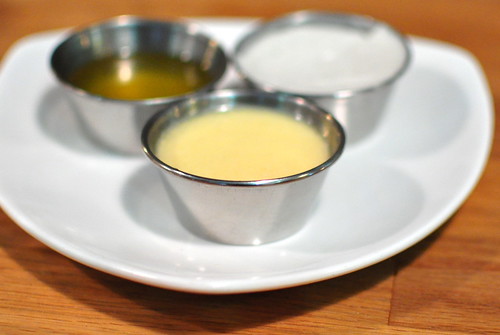 Our multi-course tasting began with individual-sized baguettes served with “Three Fat Textures.” While the clarified and brown butters were completely delicious, I found myself returning again and again to the bright white lavender-laced lard. 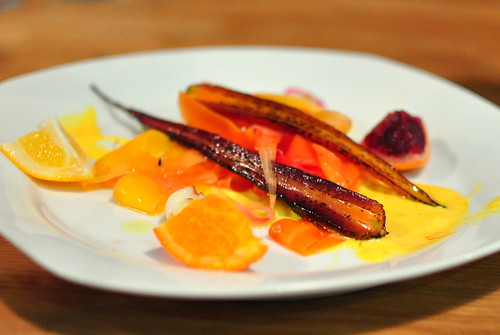 Following the bread course was a gorgeous plate of Gastrovac‘d fruits and vegetables. The centerpiece was a carrot salad with saffron creme anglaise. Cooked slow and low, the carrots retained their characteristic snap and sweetness. Pickled pearl onions and a plethora of citrus fruits (Meyer lemon, blood orange, Navel orange) brought pleasantly tart accents to the plate. 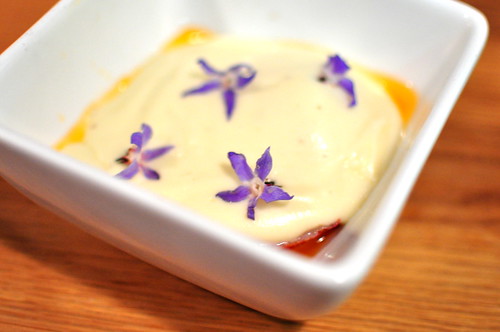 The dish that elicited the most ooh and ahhs was the “Egg, Potato Mousseline, Lobster, Borage Flower.” Hidden beneath the impossibly smooth layer of potato puree were hunks of butter poached lobster and a soft boiled egg. The intermingling of flavors between the lobster, potato, and silky yolk had us all swooning with delight. 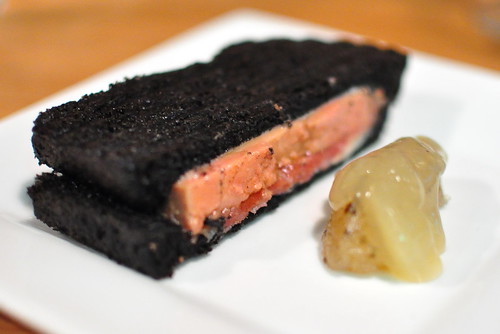 Making its second appearance on the LudoBites tour was the foie gras croque-monsieur. The sandwich initially debuted at the tail end of LudoBites 2.0 and was brought back by popular demand. While it doesn’t look like much on the outside, Chef Ludo’s croque is something kind of wonderful. Sandwiched between two slices of squid ink-dyed bread is a luscious lobe of foie gras, ham, and cheese. A chutney of lemon, turnip, and seaweed provided a bold punch to balance out the richness. Will Chi, one of Fooddigger’s founders, missed the sandwich so much that he proclaimed “welcome home” as he took a bite. Welcome home, indeed. 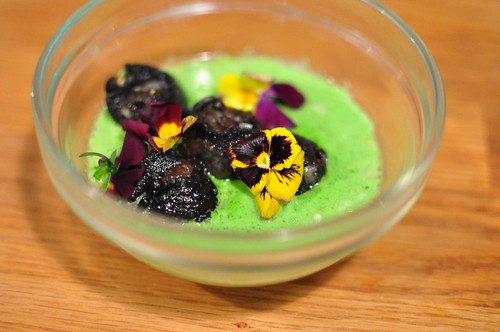 Another terrific course was the Burgundy escargots with garlic flan and parsley jus. While I can’t say that this wildly different interpretation topped the classic Escargots de Bourgogne, I did appreciate how Chef Ludo turned the standard combination of ingredients completely on its head. 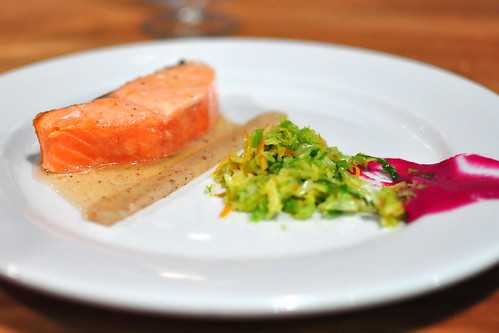 The only dish that left me wanting was the Columbian River King salmon with spring cabbage and juniper berries. While the fish was superbly cooked, the accouterments mostly fell flat and didn’t enhance the dish overall. 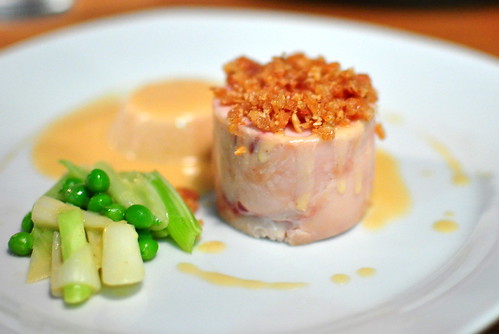 All thoughts of the lackluster salmon completely disappeared with the arrival of the peculiarly shaped Jidori chicken. The supple slab of poached white meat was topped with bits of fried skin and hazelnuts. The deconstructed chicken was impressively moist and crispy in all the right places. Pickled leeks with English peas, as well as a phenomenal bacon pudding, were on hand to mix and mingle. Having mastered the art of fried chicken, it seems that Chef Ludo is channeling his creativity toward rethinking roasted chicken. 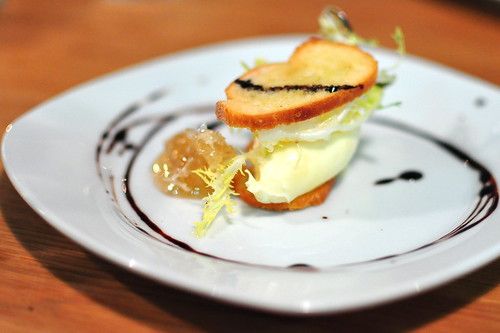 The cheese course was comprised of a brie chantilly napoleon with honeycomb, balsamic, and frisee. The rind-less brie was whipped for two hours by hand Kitchen Aid, creating a luxuriously creamy texture not unlike butter. I’ve always loved pairing honey with cheese and was pleased to have bits of honeycomb to swipe my napoleon in. 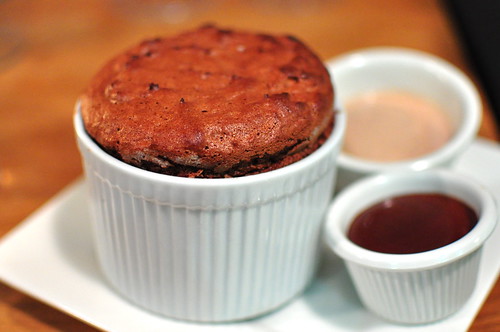 In a town where every other menu is crowded with sliders, bacon, and pork belly, Chef Ludo is seeking to do something different and memorable. Diners and critics may not always be thrilled with his jarring juxtapositions, but he’d rather be bold and fail, than predictable and popular. The beauty of LudoBites is the ever-evolving menu. Chef Ludo promises to introduce some really provocative dishes  just as soon as he’s comfortable in his new space. I can’t wait to see what he comes up with next!