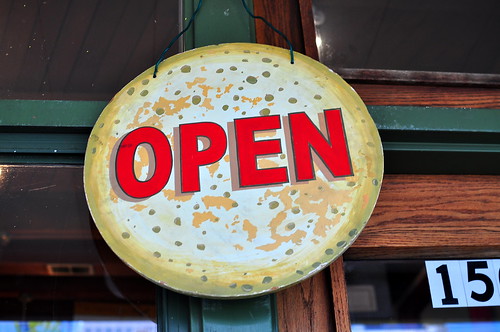 If there was one British practice that we should have retained before ousting them from our shores centuries ago, it surely is afternoon tea. I can’t think of a better way to spend the hazy hours between lunch and dinner than indulging in warm tea with clotted cream-slathered scones. As much as I adore the practice, I’ve only been to tea exactly two times in my life. On both occasions I was in a fancy hotel in Saigon [See: Caravelle and Park Hyatt] and on both occasions I missed out on crumpets. Sure, there were dainty finger sandwiches and adorable petit fours, but sadly, not a single crumpet graced my three-tiered towers. 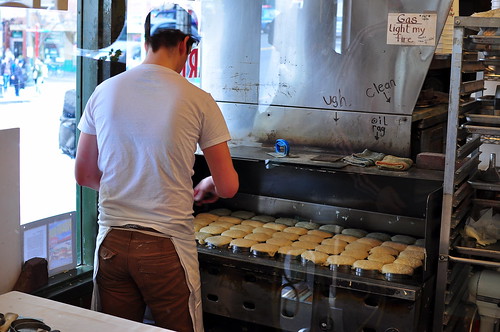 I finally had the pleasure of tasting a coveted crumpet while in Seattle. Opened in 1976 by Gary Lasater and Nancy McFaul, The Crumpet Shop has become a city institution. While crumpets aren’t traditionally eaten for breakfast, The Astronomer, Rosalind, and I thought they’d be perfectly pleasant in the morning. We snagged a table near the kitchen, granting us the opportunity to spy on the unknowing chap performing his crumpet making duties. 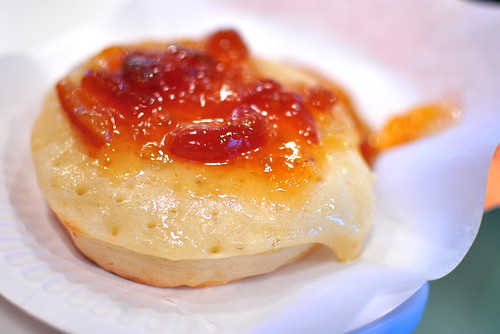 Crumpets are the result of a simple yeast batter meeting a hot griddle and circular molds. The spilled-over batter is scraped off to create a neat disc. The surface is spongy and porous, which allows butter and jam to seep into every little hole. The texture is similar to an English muffin, but a bit doughier and more substantial.

On our first visit to The Crumpet Shop, we shared two crumpets with butter and fresh preserves ($1.95). Each one was toasted to order and buttered up nicely. The marmalade was full of zesty bits and bitter enough to remind us that we were eating a whole orange with a bit of sugar rather than the opposite. 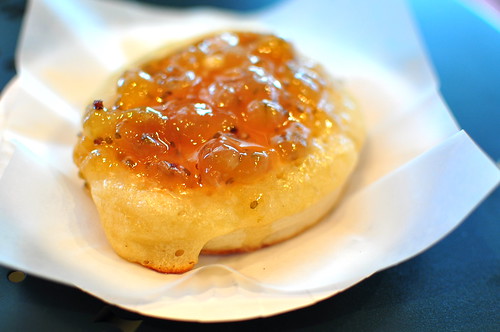 The gooseberry jam offered two firsts in one bite—my first crumpet and my first gooseberry! Taste-wise, the jam was better balanced than the marmalade. 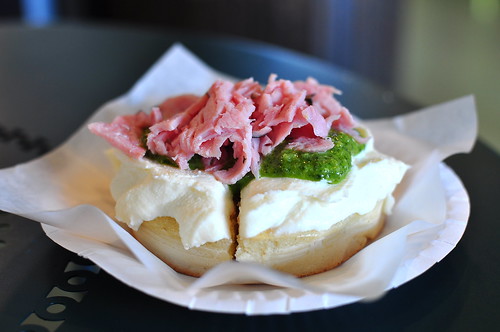 The Astronomer and I returned to The Crumpet Shop a few days later for an afternoon snack. This time around, we sampled a savory one. The warm crumpet came topped with a thick spread of ricotta cheese, house-made pesto, and shredded ham ($4). The highlight was the subtle and creamy ricotta. I don’t think I’ve ever been so taken by ricotta cheese.

I loved my crumpet experience so much that I purchased crumpet molds from Amazon as soon as I arrived home. I cannot wait to have afternoon tea in my apartment with fresh crumpets and jam served on the brand-new China from the wedding registry. Good times ahead.

13 thoughts on “The Crumpet Shop – Seattle”