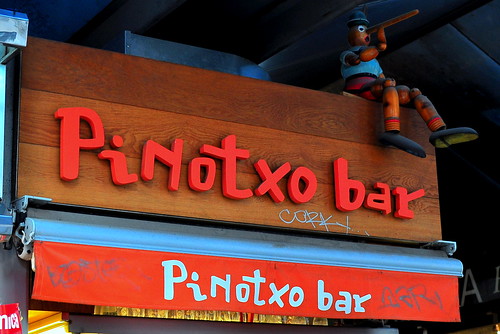 Bar Pinotxo came highly recommended to The Astronomer and me by an army of trusty folks. From our college teammate Duncan to our food blogging friend Charles to our handy dandy guidebooks, everyone had the nicest things to say about this place.

Located in the wonderland that is the Mercat de la Boqueria, Bar Pinotxo is a fourteen seat tapas bar specializing in hearty Catalan cuisine. It’s the most famous of all the eateries inside the marketplace and is constantly buzzing, from six in the morning until it closes sometime around three in the afternoon. 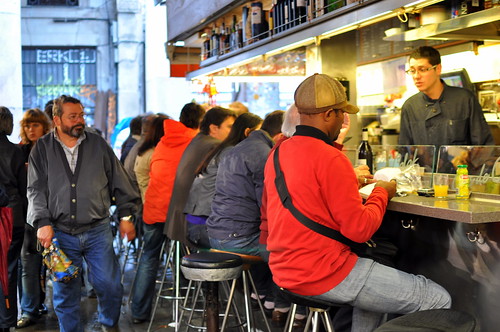 On both of our visits to Bar Pinotxo, The Astronomer and I had to wait fifteen minutes for two of the coveted metal stools to open up. Although I would have preferred to have my name jotted down on a sheet of paper and then called out when my seats were ready, the hover-behind-diners-that-are-sipping-espressos strategy worked out quite well. 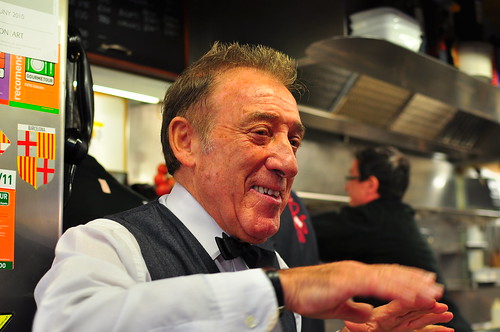 The food here is truly fabulous, but it’s Bar Pinotxo’s amiable owner that  keeps diners coming back time and again. Always decked out in a pressed vest and dapper bow tie, Juanito Bayen made sure that we were well fed and well taken care of every time we pulled up a stool. Because the bar has no written menu, it was up to Mr. Bayen to suggest to us what to eat. He sells the daily specials in the same simplified manor as international flight attendants—“pescado or carne?” 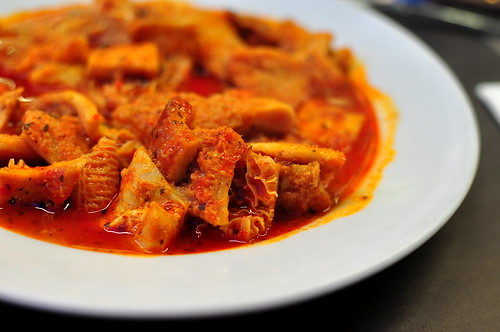 On our first visit to the bar, we arrived toward the tail end of lunch service. The only choices left this late in the day were carne or tripas. We ordered one of each. The tripas were stewed in a  fragrant tomato broth full of spices. The honeycombed pieces were incredibly tender and soaked up the flavors like a sponge. 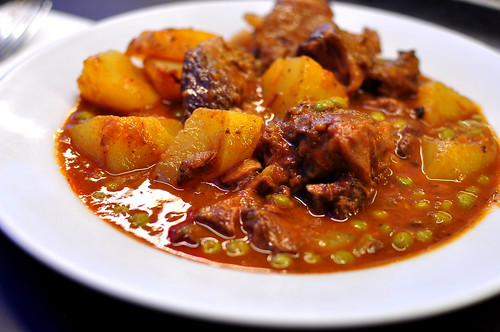 The carne stew was brimming with green peas and potatoes. The meat rivaled the tripe in tenderness. Both dishes were served with crusty bread that was perfect for sopping up the thick sauces. 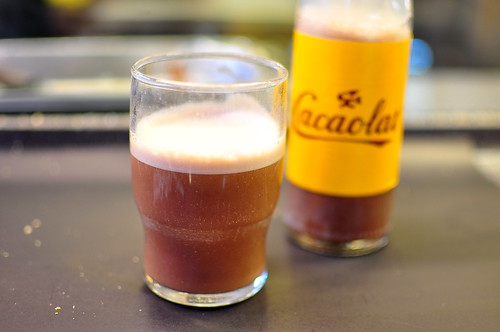 For a sweet finish, we sipped a local chocolate milk-like beverage called Cacaolat that Mr. Bayen steamed up nicely. 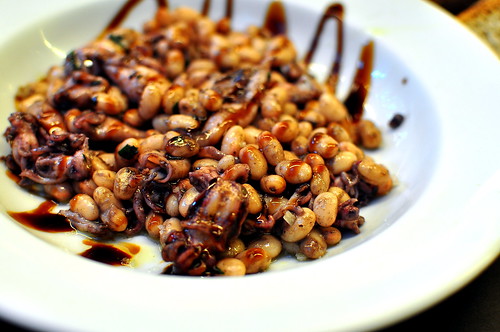 We returned to Bar Pinotxo bright and early the following day to taste all the wonderful dishes that we had missed out on the day before. We were greeted with a warm plate of baby squid and light beans called chipirónescon mongetes, the bar’s specialty. Bathed in a warm sauce of olive oil and balsamic vinegar, the beans and squid were unforgettable. 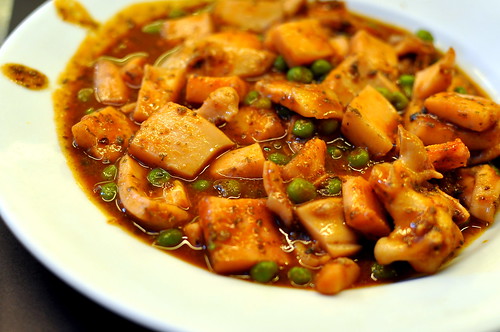 While I was entranced with the chipirónescon mongetes, The Astronomer was served a calamari dish that was very similar in composition to the beef stew that we had eaten the day before. 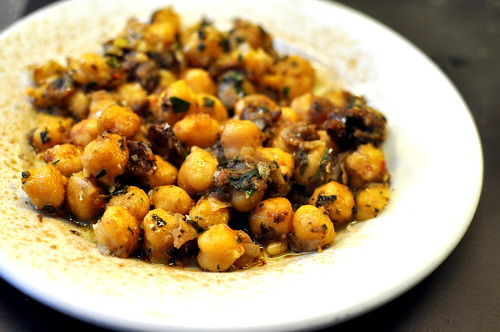 Next, a plate of chickpeas sauteed with botifarra (Catalan white sausage) arrived. Spiced with a combination of cinnamon, nutmeg, and cloves, the botifarra‘s unique flavor profile married deliciously with the garbanzos. Following the baby squid and beans, this was my second favorite dish at Bar Pinotxo. 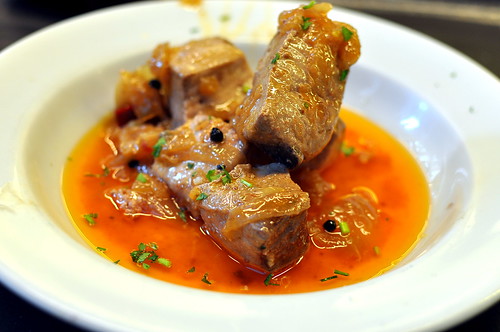 The Astronomer really liked the clove-infused atún, but I wasn’t too keen on it because I prefer tuna raw or lightly seared. This version was fully cooked through. Pass. 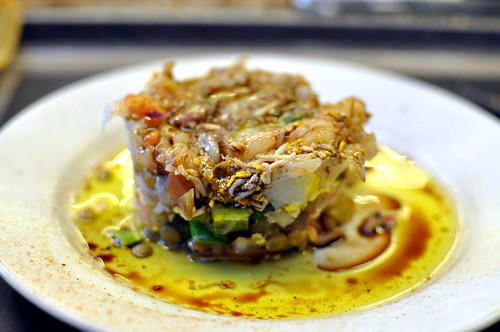 Instead, I ordered an esqueixada de bacallà (salted cod salad). Comprised of torn pieces of rehydrated salted cod mixed with tomatoes, onions, and bell peppers and dressed with olive oil, the esqueixada satisfied my desire for a light and fresh fish preparation. 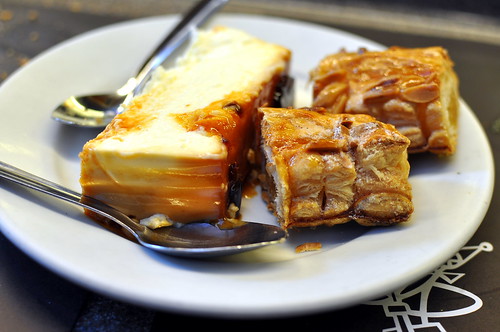 For dessert, we indulged in a rich slice of flan cheesecake and flaky pastries filled with calabaza. The thick shards of caramelized sugar atop the cheesecake nearly did me in.

Bar Pinotxo is as much about the people as it is about the food. I usually don’t like being told what to eat, but when Mr. Bayen does it, it’s all good.