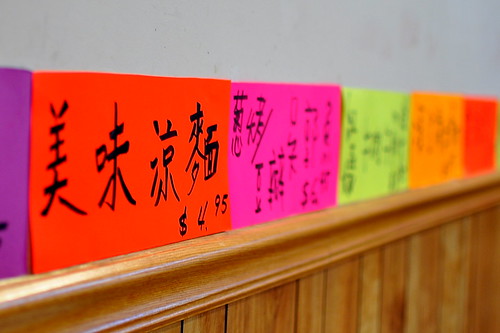 On our first attempt to dine at Dongbu Live Fish, my friends and I were greeted by dimmed lights and a “closed” sign. We were eagerly anticipating a feast of fishes, but alas, it wasn’t in the cards this Sunday evening. After coming to terms with the heartbreaking situation, we changed gears and headed to one of Danny‘s staple restaurants in Rowland Heights: Golden China.

Located in the same indoor mall as Ranch 99 Market, Golden China cooks up a variety of homey Szechuan, Cantonese, Taiwanese, and Shanghainese fare. Nearly every table was filled at this no-frills comfort food haven when we arrived. 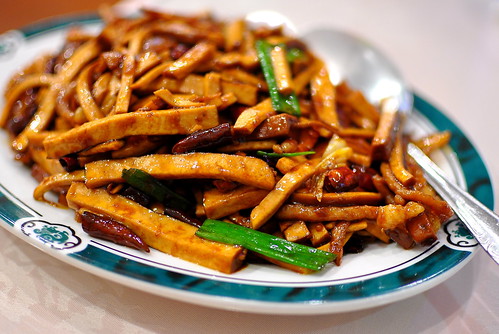 Danny took care of the ordering, while Hong and I kick backed and relaxed. The first dish to arrive was a braised bean curd and pork stir fry. The braised bean curd, which had an extra-firm texture not unlike meat, was delightfully savory mingling with the bits of pork and salty seasonings. The spice level was completely manageable even though the waitress warned us otherwise. 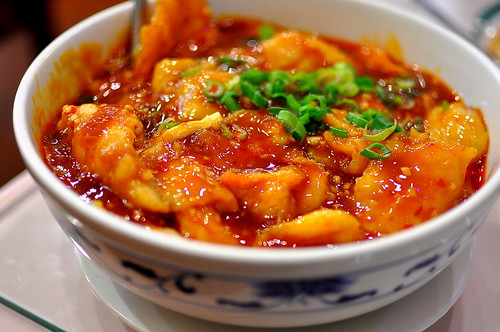 While I order yellow cupcakes topped with chocolate frosting to test out unfamiliar cupcakeries, Danny uses “water boiled fish” as an index for Szechuan establishments. Bathed in a goopy chili pepper sauce, the chunks of white fish were firm and flaky. The sauce didn’t pack us much punch as we could’ve handled, but the dish was very good nevertheless. 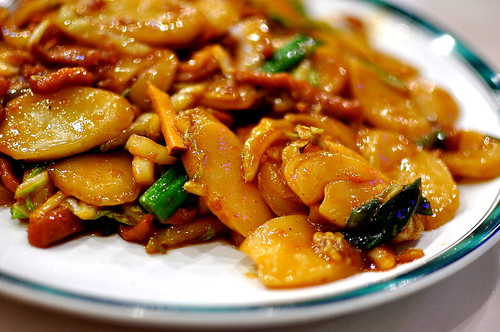 Danny selected the Shanghai rice cakes from the house specials menu. The chewy texture of the rice cakes, coupled with the sauteed pork and cabbage, was pretty darn fabulous, though not as smoky as Mama’s Lu. 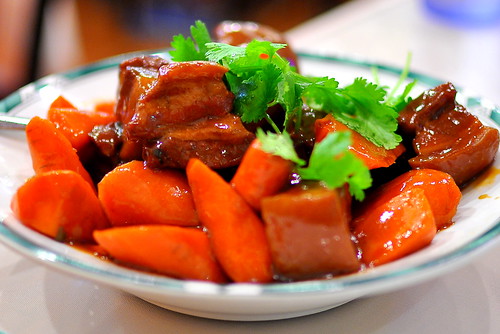 Also from the specials menu was the braised pork belly with carrots. When the dish arrived at the table, Hong and I both commented that it looked just like Vietnamese bo kho. The similarities were apparent in the flavor as well. The glossy sauce coating the carrots and pork had hints of star anise. Our only complaint was the overwhelming number of carrots compared to the meat. More pork, please. 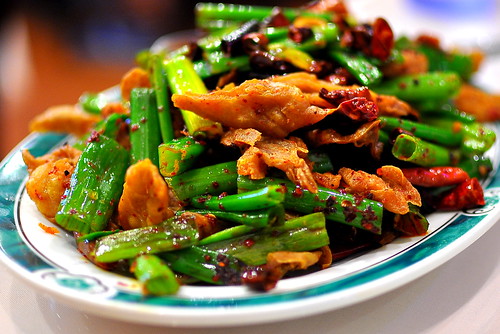 The last dish was a fragrant plate of fried intestines sauteed with scallions and Szechuan peppercorns. The peppercorns numbed our tongues, while the crispy intestines brought the crunch.

Golden China: no-fuss, good service, and solid food. What’s not to like?