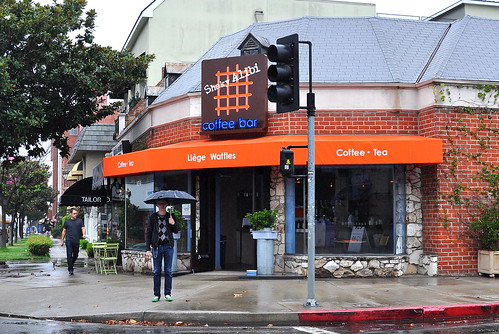 After attempting and failing to find a mind-blowingly good Liège waffle in Los Angeles at Holly’s Coffee and at Syrup Desserts, I decided to call it quits on the great waffle hunt. I left a few rocks unturned, namely Lucky Devils and Le Pain Quotidien, but another disappointing specimen would’ve surely put me over the edge.

Even though I had grown weary of the local selection of waffles, I still sought them out while on the road. In Seattle, I encountered brilliantly executed sweet and savory creations at Sweet Iron Waffles. And most recently, I returned to Bonte in Philadelphia, where the Liège waffle obsession was born, and fell in love all over again. Two standout renditions was all it took for waffles to woo me back.

I returned home from my trips with a renewed sense of purpose and drive—I was going to find Los Angeles’ best Liège waffle! 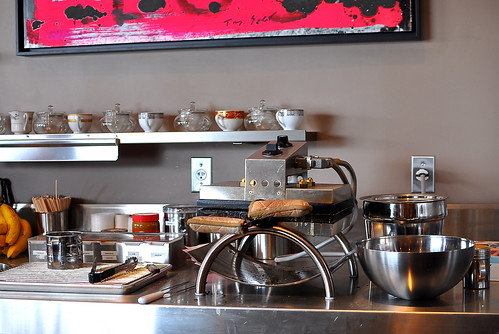 I headed to Shaky Alibi as soon as my enthusiasm for waffles was reignited. Opened by R.J. Milano this past summer, Shaky Alibi is a wafflerie, coffee shop, and tea bar all rolled into one. The waffles, which are made using a family recipe cooked up by the owner’s German-born great grandmother, are made from a yeast dough and are coated in pearl sugar to create a slightly crispy, caramelized shell. 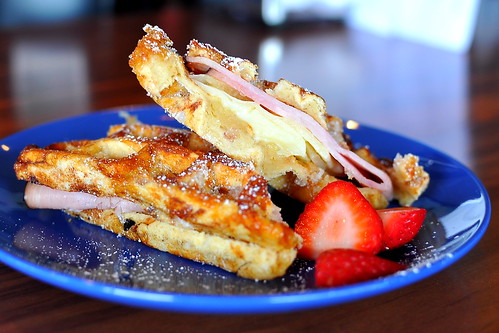 Shaky Alibi serves both sweet and savory varieties. Nastassia, my dining companion this afternoon, and I shared two savory and one sweet. We started with a Black Forest ham with gruyere ($8.95). The waffle was made fresh to order, sliced in half, and filled with ham and cheese that had been microwaved for maximum meltage. A little powdered sugar on top and the plate came our way.

The sandwich’s flavors reminded me of a Monte Cristo, minus the blunt sweetness and oily aftertaste. While I appreciated the sweet and savory double punch, I felt like I didn’t get a true sense of the waffle’s personality. The flavorful filling, coupled with the fact that the waffle was sliced in half, made it difficult to tell whether this baby was the real deal or not. 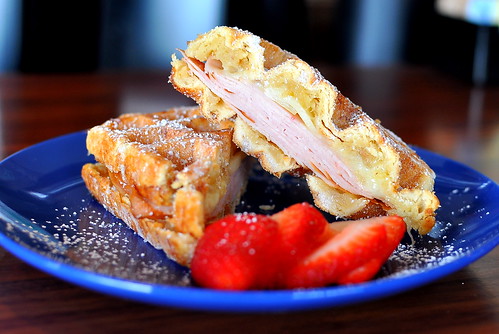 Our second waffle contained mesquite smoked turkey with smoked fontina cheese ($8.95). I felt the same way about this one as I did the last—it had a lot of great flavors and textures going on, but none of them highlighted the waffle’s unique traits. 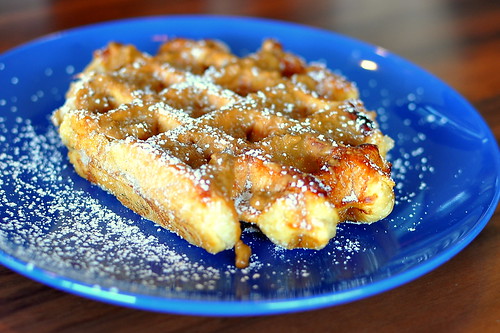 We weren’t treated to the full Liège experience until the dessert waffle arrived ($5.50). It came smeared with a layer of crunchy Speculoos ($.99) as suggested by our waiter. Served hot out of the iron, the waffle looked and smelled absolutely enticing. I bypassed the fork and knife, picked it straight up, and delivered it swiftly into my mouth. One bite and my eyeballs were rollin’ toward the back of my head. This waffle was incredible! 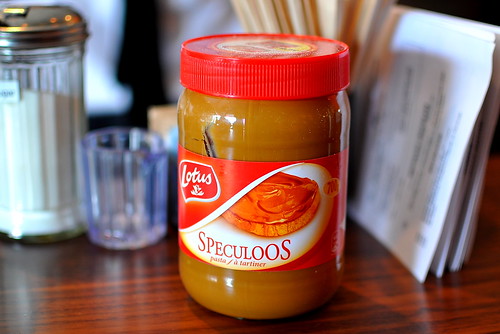 Its texture was perfectly dense, flaky, and caramelized, while the graham cracker spread was all sorts of wonderful. The crunch of pearl sugar was missing, but the glaze that it left behind more than made up for it. Now, this is what I came for!

Thanks for renewing my faith in locally produced Liège waffles, Shaky Alibi. Great grandma Agnes must be proud.