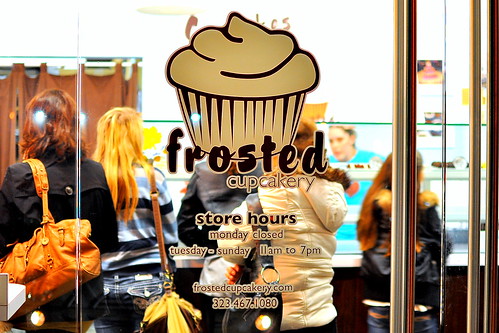 My cupcake obsession has been waning as of late. With gourmet doughnuts, bread pudding, and whoopie pies wrestling for my affections, cupcakes have taken a back seat. While I still think that they’re unrivaled in the cuteness department, I no longer feel that strong pull to sample every specimen that looks my way. Or so I thought…

Elina Shatkin, the latest addition to The Weekly‘s squad of discerning critics, recently penned a piece about Frosted Cupcakery‘s flavor of the month: Bacon Cornbread Cupcake. Her enthusiastic prose reignited my old friend Compulsion. I hadn’t felt strongly about a cupcake in months, but I had to try this bacon dotted, honey frosted cornbread cupcake—no ifs, ands, or buts about it. 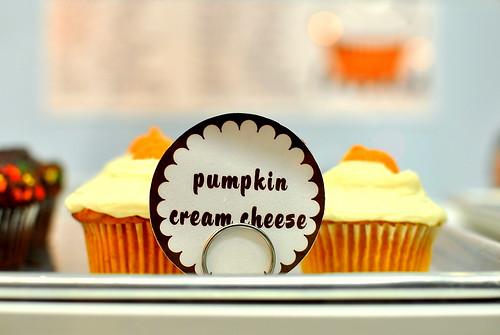 The Astronomer and I dropped into Frosted ten minutes before closing two Saturdays ago. Since we couldn’t arrive any earlier, I made sure to call in and reserve a bacon cornbread cupcake. It was a good thing that I did, because the entire batch was sold out by the time we came in. Luckily, the gal who answered my call delivered as promised and there was one Flavor of the Month left with my name on it. 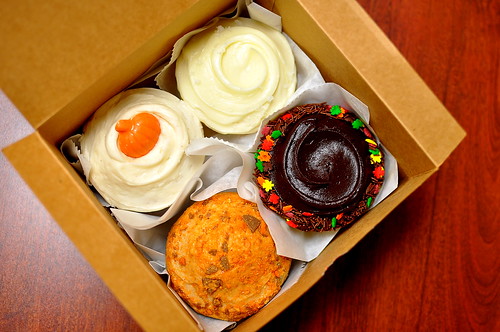 I decided to pick up three additional flavors since they looked so lovely behind the glass case ($2.95 each). We were meeting up with a group of friends for dinner at Pa-Ord Noodle soon after, so I knew these sweet treats would be appreciated. 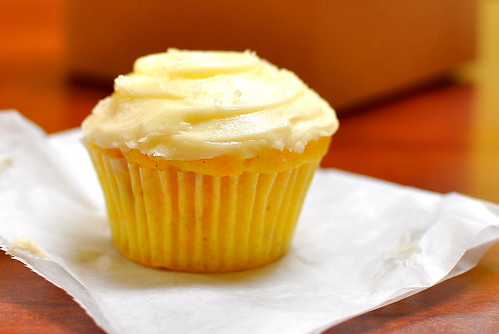 After polishing off our bowls of spicy-as-heck boat noodles, I busted out the cupcakes for dessert. The first one on deck was the highly-anticipated bacon cornbread cupcake, which was frosted with honey buttercream and sprinkled with flakes of sea salt.

The cake offered the perfect balance between fluff and corn, while the  frosting tasted rich and not too sweet. The salty shards atop the buttercream were a very nice touch. Sadly, the pieces of bacon in the batter were on the soggy side and didn’t do much to enhance the cupcake. The entire table agreed that the creation would’ve been better off if the chewy bacon had never come to play. Oh, well. Bacon can’t save the day every day! On to the next… 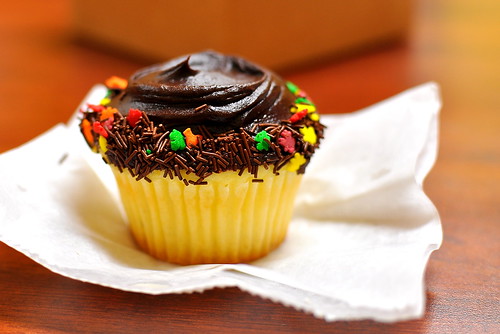 The remaining three cupcakes were all very well executed. We could find no fault with the yellow cupcake with chocolate buttercream… 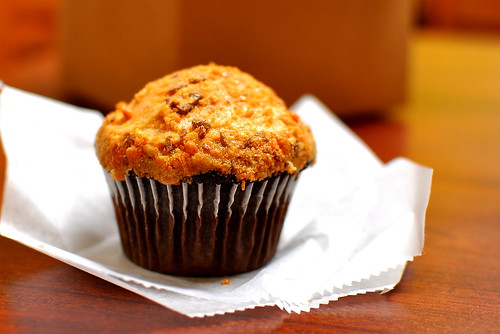 …nor the chocolate cupcake with peanut butter buttercream—the mashed up Butterfingers on top were a hit! 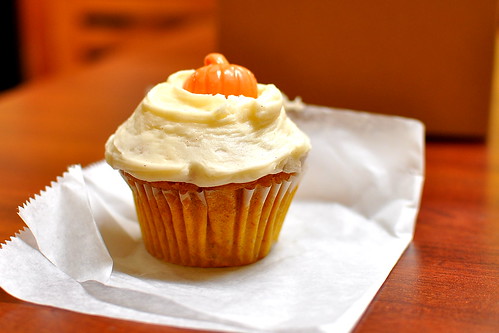 But everyone’s favorite was the seasonal pumpkin cupcake with cream cheese frosting. The spiced cake was so bouncy and nice that I wanted to jump on it like a trampoline and nuzzle my face into its orifices. Yes, orifices.

If only for a night, it was a pleasure reuniting with my beloved cupcakes.