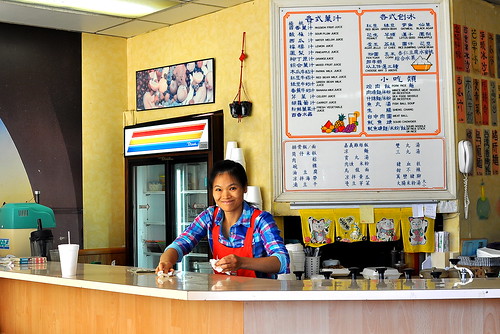 I’ve mentioned my friend Sharon once or twice on the site, but she deserves more than a brief sentence in passing. You see, she’s my SGV guru. Sharon grew up in Alhambra, one block north of Valley Boulevard to be exact, and has had a lifetime of meals in the area under her belt. Try as I might to learn the lay of the land, I’ve barely made a dent in the scene during my two years of delectable explorations.

Lucky for me, Sharon happily takes me to her favorite haunts whenever she flies in from North Carolina, where she currently resides. On our most recent outing, we headed to Old Country Cafe to satisfy her serious hankering for Taiwanese-style fried chicken. 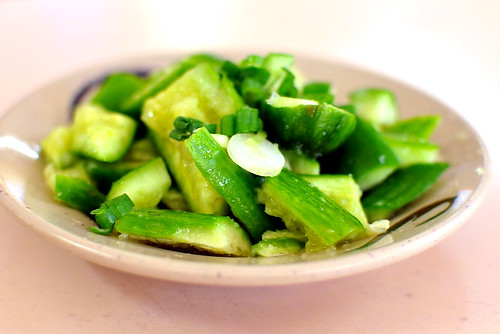 Old Country Cafe, one of the oldest Taiwanese restaurants in the San Gabriel Valley, is a charming hole-in-the-wall tucked inside a not-so-charming office-plex. The tiny space is heavy on the Formica and looks like  it hasn’t been updated since its first day of business—I love places like these! We grabbed two stools along the counter and settled in with sweet drinks: salty plum for me and passion fruit for her.

We started off with a dish of snappy and chilled “flavored cucumber” ($2.25) at Sharon’s urging. She adored the vegetable’s garlicky undertones and salty kick. I admired its jagged edges and irregular shapes; it was as if the cucumber was hacked by a clawed animal. 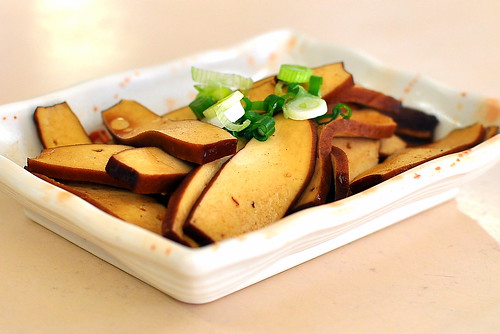 We may or may not have ordered the bean curd ($2.50) that followed, but we were very happy to eat them nevertheless. Lightly marinated in sesame oil and soy sauce, the bean curd was savory and characteristically toothsome. 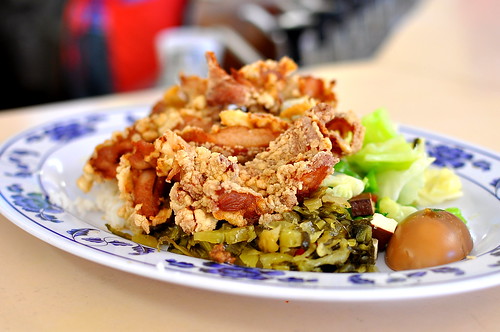 Our main courses arrived through a curtained portal connected to the kitchen. Sharon was thrilled with her fried chicken with rice platter ($5.50), which came with pickled mustard greens, half a tea egg, and bits of cabbage on the side. In between the fried chicken cutlets and steamed white rice was a spiced meaty gravy. She ate each bite with gusto, knowing that such bounty could not be had down South. 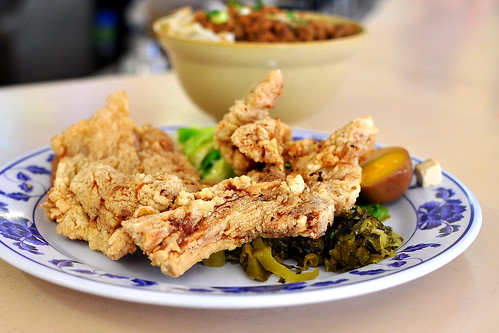 Since this was my first time eating this type of homey Taiwanese fare, I didn’t veer too far from Sharon’s lead and ordered the fried pork chops with noodles ($5.50). When my plate arrived, I was taken aback by the foreign formations upon it. Somewhere between being pounded thin, dredged in cornstarch, and fried to a tempura-like crisp, the chop lost all semblance of the piggy I know and love and turned into petrified wood.

Taste-wise though, there was nothing petrifying about the matter. The coating was airy, yet crisp, and seasoned simply with salt and pepper.  The meat was moist enough, but being so thin, it wasn’t really important. 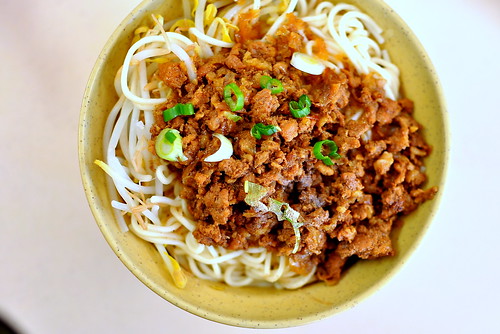 The noodles that came with my pork chop were served in a large bowl on the side. It was topped with a Taiwanese bolognese and garnished with blanched bean sprouts. Imbued with cloves and anise, the mixture reminded me of the bolognese sauce that my brother taught me how to make.

Sharon and I ate like champions this afternoon, but we still went home with doggy bags in hand. Old Country Cafe may not have the most refined fare, but considering the portions and price, this joint is most satisfactory.