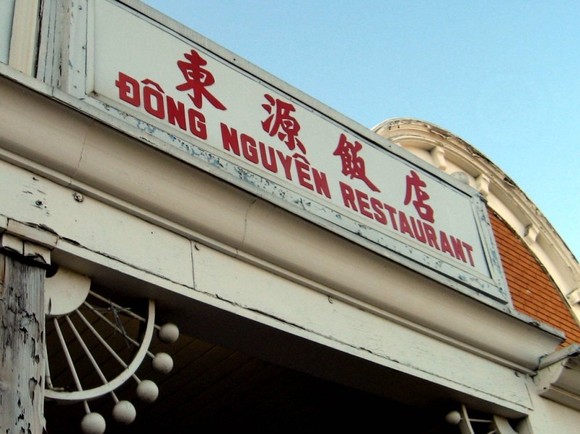 As much as I love introducing friends and family to new foods and great restaurants, being shown the ropes by a resident eater is oftentimes even better. Every once in a while, it can be a real treat to just sit back, relax, and let someone else assume the role of Gastronomer.

It’s a red letter meal whenever I dine with gas•tron•o•my reader Sharon. She currently resides in Durham, North Carolina, but grew up in the heart of the San Gabriel Valley. Her extensive knowledge of Chinese and Vietnamese gems up and down Valley Boulevard is impressive and inspiring. 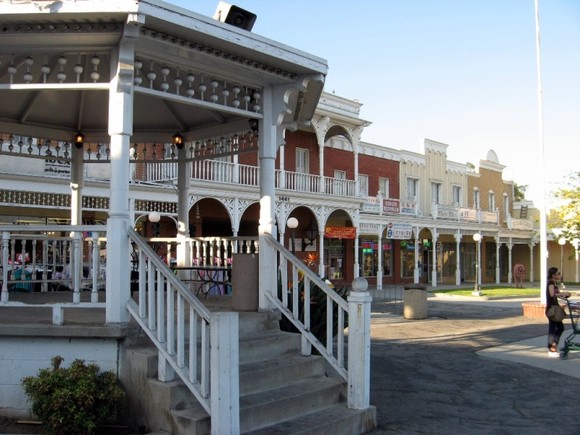 The initial plan for our Wednesday night dinner was to meet up at Sharon’s favorite banh cuon restaurant in Alhambra. Unfortunately, it was closed this evening, so we headed next door to Đông Nguyên, a restaurant Sharon’s family has been frequenting since she was a small fry.

Located in a strip mall with an uncanny resemblance to Disneyland’s Main Street U.S.A., Đông Nguyên specializes in Chinese-Vietnamese cuisine. The restaurant’s proprietors hail from Vietnam, Chợ Lớn in District 5 to be exact, but are ethnically Chinese. The majority of the dishes served here are traditionally considered to be Chinese. However, some of the offerings contain distinctly Vietnamese touches, like nuoc mam-based marinades and sauces. This is fusion cuisine at its finest. 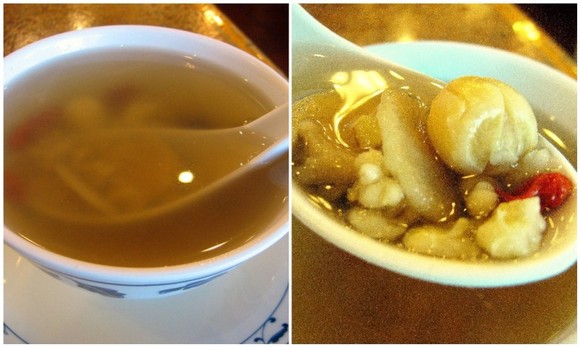 All of the wonderful ladies who work at Đông Nguyên can speak Cantonese, Vietnamese, and of course, English. While Sharon spouted her order in Cantonese, The Astronomer and I gave ours in Vietnamese. Sharon and I were both impressed by the lack of language barriers.

Before our entrees arrived, we were each served bowls of Chinese medicinal soup. The mildly warm chicken broth-based soup contained barley, lotus seeds, goji berries, and a number of unknown, but surely virtuous, ingredients. 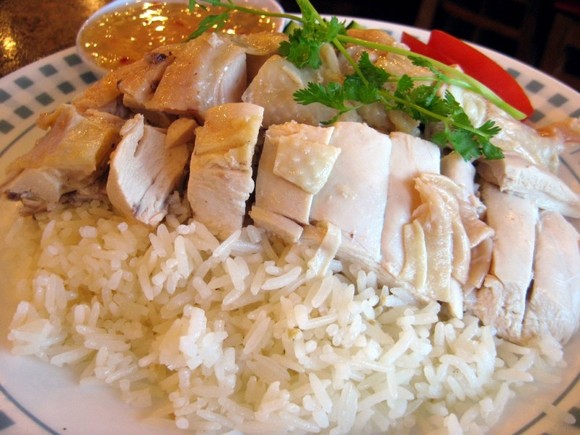 The Astronomer ordered the house special—com ga Hai Nam, also known as Hainanese chicken rice ($6.50). This dish is prepared by boiling a whole chicken in an aromatic broth, and using the resulting liquid in place of water to make the rice. At Đông Nguyên, both the chicken and the rice are prepared splendidly. The rice is delicate and incredibly fragrant, while the meat is tender and infused with notes of garlic, ginger, and onions. 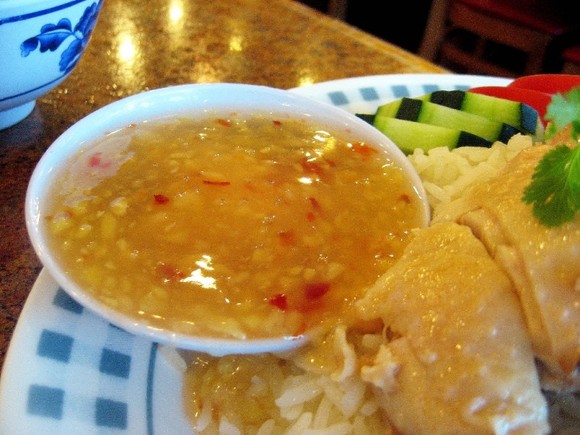 The absolute best part of chicken rice is the ginger and chili dipping sauce served on the side. Poured liberally over the chicken and rice, it makes the entire dish really come together. 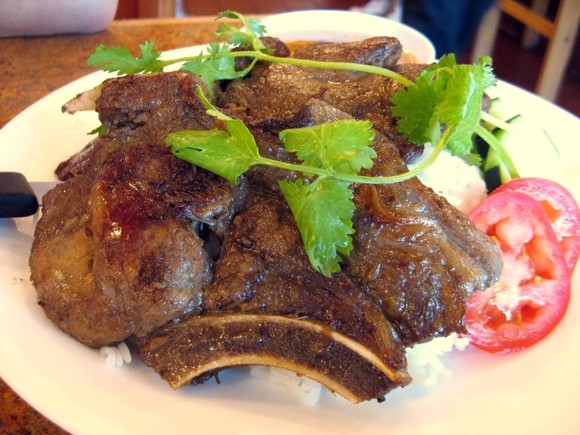 Sharon ordered her go-to rice plate, com suon nuong ($6.50), which came with a little dish of nuoc cham on the side. I had never before seen such a mountainous portion of grilled pork chop slabs. The Astronomer commented that this was most definitely an America-sized portion. The Vietnamese are very skimpy with their meats. 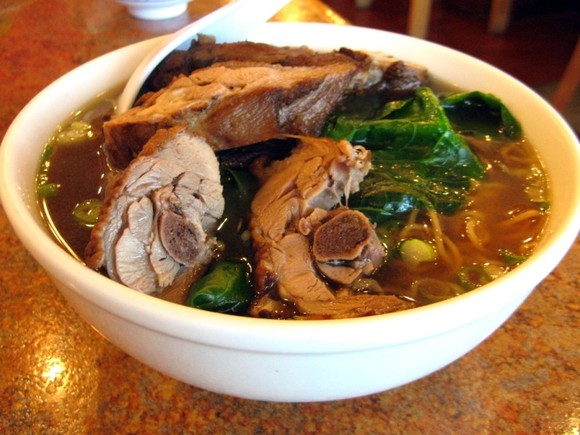 I settled on a bowl of mi vit tiem ($6.75)—Chinese duck noodle soup. The large bowl arrived hot and was brimming with tangled egg noodles and big hunks of duck meat, all in an herbal star anise broth. The mi vit tiem was served with pickled green papaya on the side to balance the duck’s fatty nature. Although the noodles were definitely solid, it didn’t match the awesomness of my Lunch Lady’s rendition in Saigon. What can I say? I’ve been spoiled.