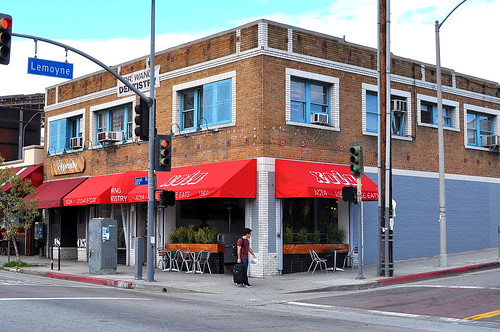 If The Astronomer and I were to combine our culinary heritages, we might come up with dishes like toasted ravioli filled with lemongrass pork and collard greens braised in fish sauce. Sounds intriguing and even a little tempting, wouldn’t you say? This sort of whimsical marrying of cuisines is exactly what the husband and wife team of Jose Sarinana and Thien Ho are doing at Xoia Vietnamese Eats in Echo Park. 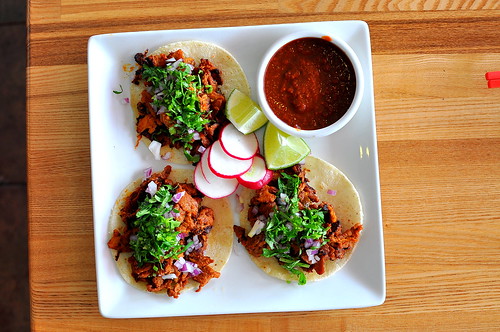 Opened last summer, Xoia serves a mostly Vietnamese menu with a handful of inspired dishes that bring together elements from both Vietnamese and Mexican cuisine. The cultures collide most successfully under the “Taco” section of the menu. I really enjoyed the anise and cinnamon spiced phở tacos that I sampled at the restaurant’s soft opening and couldn’t wait to try another mash-up during my subsequent lunchtime visit. 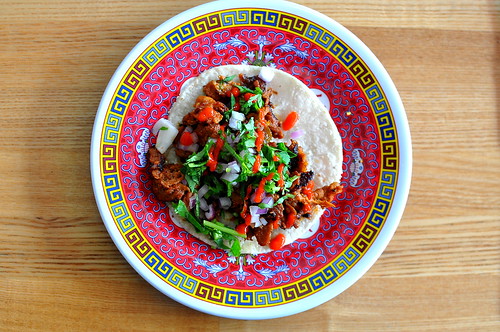 My easygoing dining mate Nastassia was game for just about anything, so I ordered the mì quảng-inspired tacos ($5.75). The three tacos were served on warm corn tortillas with fresh cilantro, diced red onions, and a side of house-made red salsa. The tender pork was richly spiced with paprika and shallots; I added a squiggle of Sriracha for good measure.

The tacos’ flavors were brighter and more robust than a bowl of mì quảng. Concentrating the spices and upping the oomph allowed the protein to work terrifically as a taco filling. Next time, I’m going to sample the chicken curry tacos. 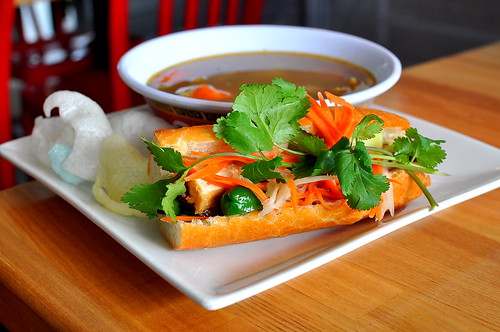 For our main entrees, Nastassia and I both ordered the “daily lunch special” ($6.99), which included half a bánh mì, a half order of noodle soup, and a side of shrimp chips.

I was tempted to order the lemongrass pork carnitas bánh mì that I liked on my previous visit, but decided to try one filled with tofu and mushrooms instead. The sandwich included the usual pickled carrots and daikon, cilantro, cucumbers, and jalapeños, as well as a garlicky mayonnaise that tied everything together. The toasted baguette was outstanding, while the tofu and shitake fillings were subtle yet satisfying. 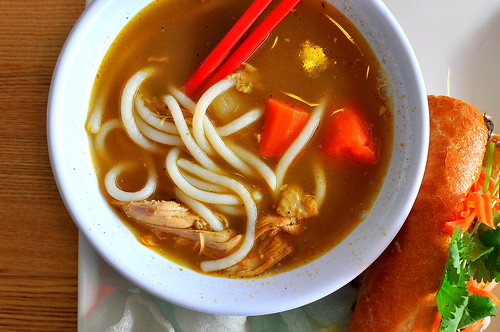 I chose the chicken curry noodle soup to accompany my sandwich. The fragrant broth was brimming with shredded chicken, potatoes, carrots, and thick rice noodles. It was a little difficult maneuvering the slippery strands using the plastic chopsticks, but Nastassia and I persevered to capture every last noodle.

By the way, Xoia is named after Jose and Thien’s daughter, who pioneered Vietnamese-Mexican fusion years ago when she began dipping her shrimp chips in salsa. To think, a toddler’s curious palate started it all!