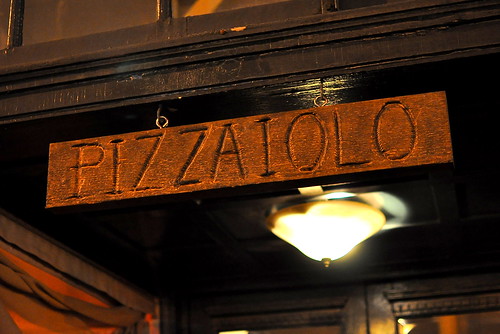 Following lunch at Homeroom, The Astronomer and I tucked into a nearby coffee shop for a hit of caffeine and Internet time. It was horribly wet and gray out, so we ended up spending the entire afternoon hunched over our laptops rather than re-exploring my old ‘hood. When dinner time rolled around, we met up with our friends Maria and Jessica at Pizzaiolo. We hadn’t seen these gals since our wedding last April, so we had oodles to catch up on. 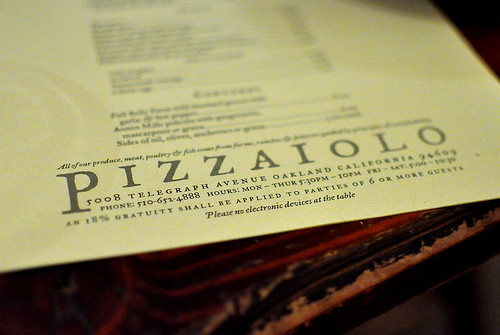 Ever since I fell head over heels in love with pizza last spring in Seattle, I’ve been making a conscious effort to seek out amazing pies in every city that I visit. Charlie Hallowell opened Pizzaiolo in 2005, and it has since become one of the best pizzerias in the greater Bay Area. Chef Hallowell, who spent eight years in the kitchen of Chez Panisse, offers a menu driven by locally grown, organic, and seasonal meat and produce. The offerings change daily based on what’s pristine and inspiring. 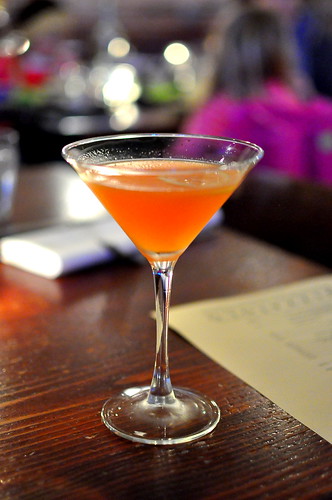 While waiting for our pals to arrive, I sipped on a citrusy cocktail ($10), while The Astronomer had a beer. How gender appropriate of us. 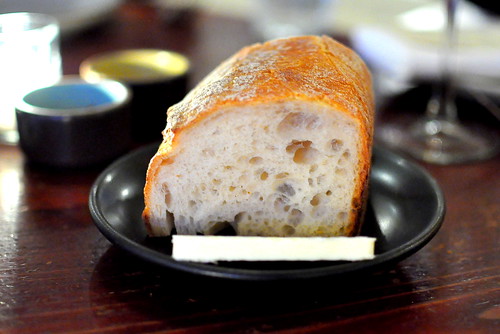 Pizzaiolo serves complimentary Acme bread by request only. The bread and butter were so good that The Astronomer and I quickly polished off the first loaf and had to ask for a second one when our friends finally joined us. 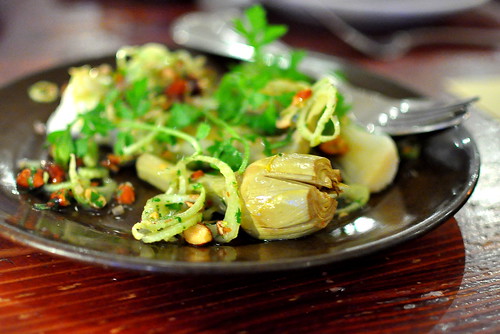 I was eying the Monterey Bay sardine toasts with puntarelle, black olives, preserved lemon, and mint ($10) to start, but had to switch gears when my friends revealed that they had both become vegetarian since we last dined together. Living in the East Bay for an extended period of time will do that to you, I guess. That, and attending graduate school at Berkeley. Wink wink.

Instead, we shared a gorgeous composed salad made with Bellwether Farms ricotta, artichokes, leeks, shaved fennel, and salsa rustica ($10). The plate was full of springtime goodness, which was a welcomed treat in this atrocious weather. 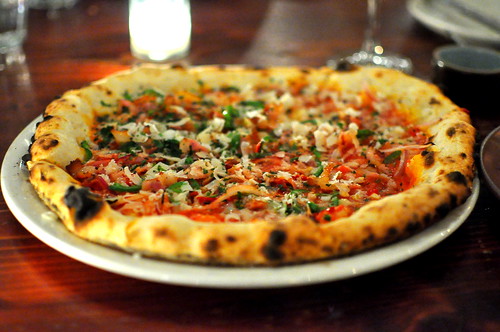 The stars of the Pizzaiolo show were next to arrive. The Astronomer and I shared a pie topped with tomato sauce, pancetta, hot peppers, and grana ($17). The thin-crusted pie was evenly blistered around the edges from the 750-degree oven.

The combination of toppings sounded superb on the menu and tasted even better in real life. The red chilies and jalapenos brought a slight but lingering burn, while the pancetta was straight up snappy. Mostly, I was impressed that the pie had a lightness about it. It was satisfying and flavorful, without striking a heavy chord. 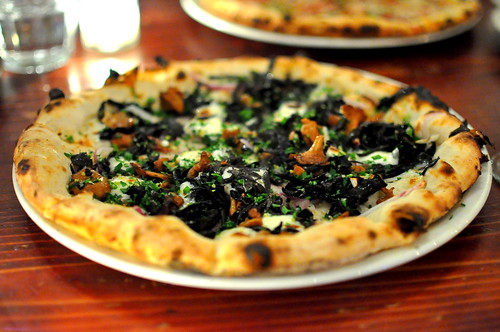 Maria and Jessica shared a pizza topped with wild mushrooms and gremolata ($19). They were sweet enough to offer a slice to their omnivorous friends. The trumpet and hedgehog mushrooms had a fleshy way about them, while the gremolata (lemon zest, garlic, and parsley) brightened up the entire pie. To top it all off: oozy pools of mozzarella curd. Jessica had previously dined at Pizzaiolo and hadn’t been very impressed, but this pizza really changed her mind about the place.

As much as I love to explore new restaurants, I love meeting up with old friends even more. When it’s possible to combine the two, it’s pure blissed-out heaven for me.