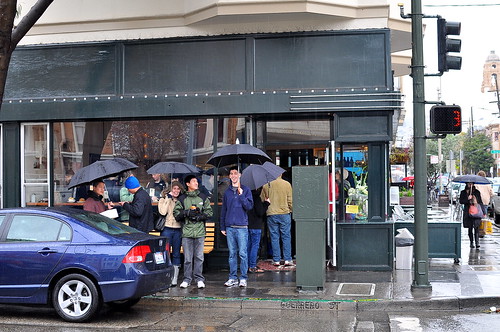 From the perspective of a casual visitor, it seems that the pitter-patter of rainfall whets the appetite of Nor Cal food lovers. In spite of inclement weather, hungry hoards were lined up outside Homeroom in Oakland, and once again at Tartine Bakery & Cafe in San Francisco. I’m one of those wussy So Cal-types known to cancel dinner reservations whenever a storm approaches, so I was especially impressed to witness such sheer determination.

When The Astronomer and I arrived on the Tartine scene, we were greeted by a line fifteen deep snaking out the bakery’s door and into the rain. Seeing these dedicated folks waiting so patiently got us even more excited to sample the breads and pastries of Elisabeth Prueitt and Chad Robertson. The husband and wife duo opened Tartine in 2002 after graduating from the CIA and training extensively in France. In 2008, the couple was awarded with Outstanding Pastry Chefs honors by the James Beard Foundation. 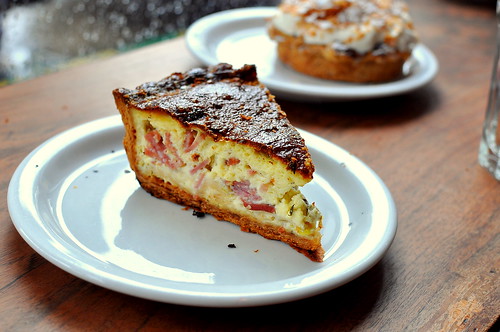 Joining us for lunch were my cousins Timmy, Michael, and Andrew, and Timmy’s girlfriend Jessica. Our friend A.J. rounded out our party of seven. Since our group was humongous by Tartine standards, we congregated along the bar overlooking the sidewalk. A comfy table was definitely not in the cards.

Nearly everyone in our group ordered one savory and one sweet item from the concise menu. I went with a slice of quiche ($4.75) made with crème fraiche and Niman Ranch smoked ham. The texture of the egg had a gentle quality about it, while the crust was sturdy and buttery. Had it been served hot out of the oven (and with hot sauce on the side), I would’ve been more enamored. 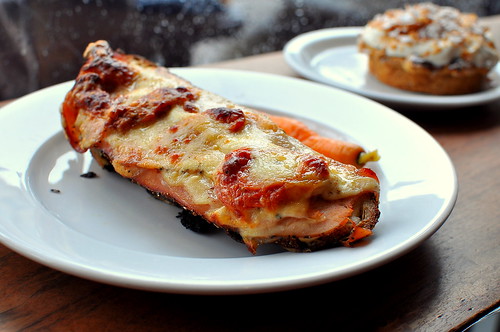 The Astronomer’s croque monsieur ($9.75), on the other hand, was warmed in the oven just before serving and arrived perfectly toasty. The open-face sandwich was layered with béchamel, gruyere, thyme, pepper, and Niman Ranch ham. While the toppings were all superb, it was the bread base, which was baked in a wood-fired oven, that really stood out. That, and the spicy pickled carrot served on the side. 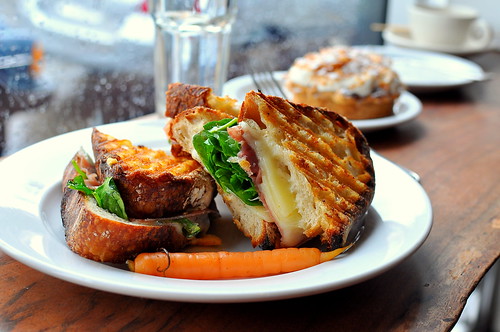 A.J. ordered the prosciutto, arugula, and provolone sandwich ($13), and generously shared a portion with The Astronomer and me. As was the case with the croque monsieur, the filling was great but the bread totally stole the show. 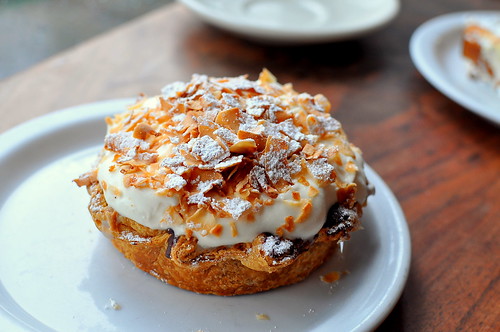 For the sweet portion of my meal, I selected a gorgeous coconut cream tart ($6.50) from the bakery display. The base was a flaky pastry coated in dark chocolate, while the filling was one part pastry cream and one part lightly sweetened cream. The entire creation was topped with slivered almonds, toasted coconut, and powdered sugar. The tart took my taste buds to a sunny and happy place. 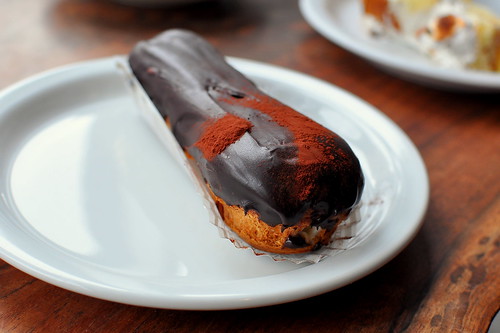 Timmy and his gal shared an eclair ($4.95) filled with vanilla custard and coated in a thick Valrhona glaze. I stole a bite and loved the intensity of the chocolate coupled with the velvety custard filling. 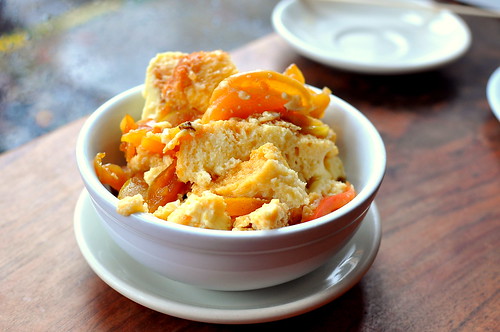 The Astronomer’s brioche bread pudding with apples ($6) was served at room temperature. By the time we finished up our savories, the dish had grown unappealingly cold. We asked the folks behind the counter to reheat our pudding, but they couldn’t swing it. Instead, we packed it home and enjoyed it several days later. It was a fine bread pudding, but probably would’ve tasted worlds more memorable had we eaten it warm on the day it was made. 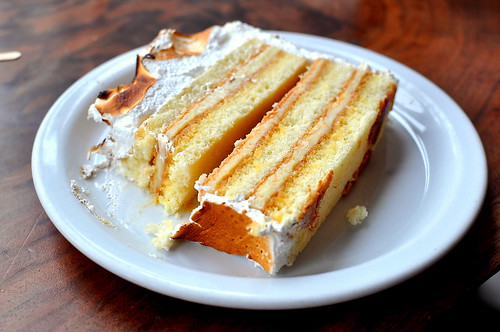 Andrew took a forkful of his lemon meringue cake before I could steal a shot, but I didn’t really mind after seeing the look of immense satisfaction on his face. The beauteous slice was made with lemon-moistened genoise layered with caramel and lemon cream. It was topped with torched peaks of meringue. Andrew kindly offered me a taste, but I refused because I got the sense that he wanted the cake all to himself. It was that good. 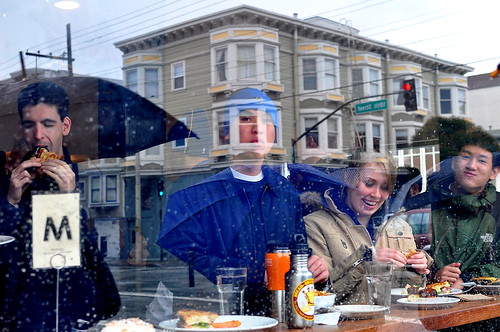 Gray skies and cold rain usually get me down, but spending the afternoon in Tartine with friends and family, I adopted the Nor Cal spirit and ate and laughed with glee.