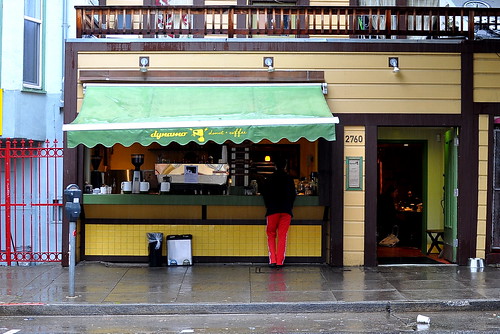 Last December, Eater LA asked a slew of the city’s food writers to predict a dining world headline for 2011. My prediction—Gourmet Doughnuts Overtake Cupcakes and Macarons!—wasn’t based on anything substantial, just a secret hope I’ve been harboring since thoroughly stuffing my face at New York’s Doughnut Plant and at Seattle’s Top Pot Doughnuts and Frost Doughnuts.

We’re three months into 2011 and there’s no sign of a gourmet doughnut shop opening anywhere in the city. Though a deep-fried revolution doesn’t seem likely in the remaining months, I’m keeping my fingers tightly crossed. Until L.A. gets its doughnut act together, I am forced to satisfy my cravings on the road at places like Dynamo Donuts in San Francisco. 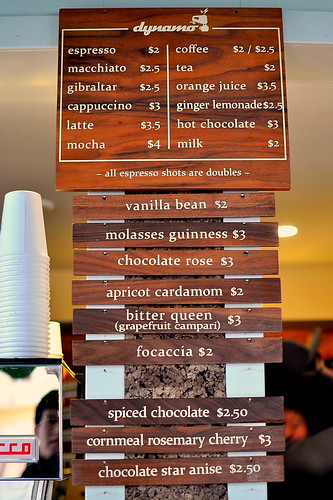 Sara Spearin opened Dynamo in 2008 after graduating from the New England Culinary Institute in Vermont and honing her pastry skills at a slew of fine dining restaurants in New York and San Francisco. Dynamo is dedicated to using organic, sustainable, and local ingredients whenever possible. All doughnuts are handmade daily, with a rotating selection of seven to ten donuts available each day. 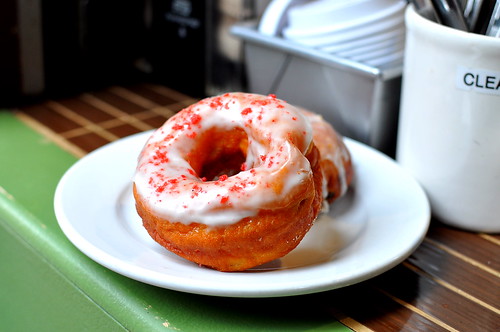 I was hoping to get my paws on one of Dynamo’s famous bacon maple doughnuts, but alas, they were sold out by the time our crew arrived. Instead, I chose the “Bitter Queen” ($3), which was comprised of a candied grapefruit doughnut topped with an elderflower glaze and Campari sugar.

I was skeptical that a doughnut could ever taste anything but sweet and really sweet, but this creation surprised me with its legitimately bitter notes. The light and delicate yeast dough provided the ideal base for the grapefruit and apéritif to do what they do best—elicit bitter faces. 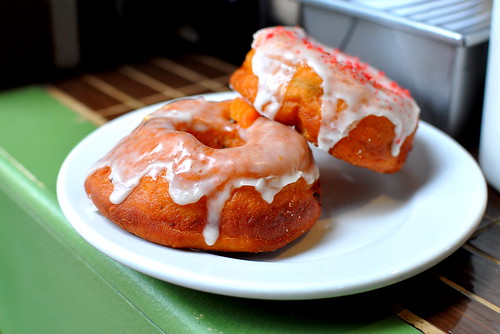 The Astronomer picked out the apricot cardamom ($2) because he is currently obsessed with all things cardamom. It was comprised of a cardamom doughnut studded with dried apricots and currants and topped with a cardamom glaze. Though it was a palate pleasing doughnut, the cardamom flavors weren’t as clean and distinct as The Astronomer had hoped for. 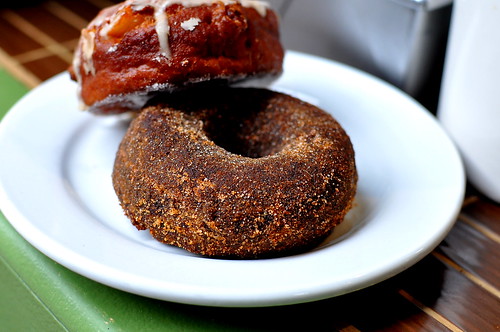 My cousin Michael chose the spiced chocolate ($2.50). A sprinkling of chili powder upon the cakey doughnut’s surface brought a mild wave of heat along with the chocolaty sweetness. 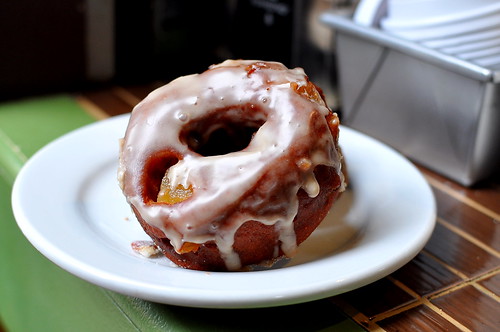 My cousin Timmy shared the molasses Guinness ($3) with his gal Jessica. While they were hoping for a blast of hops and malt, the molasses stood front and center instead. Little pieces of apples were woven throughout the batter. 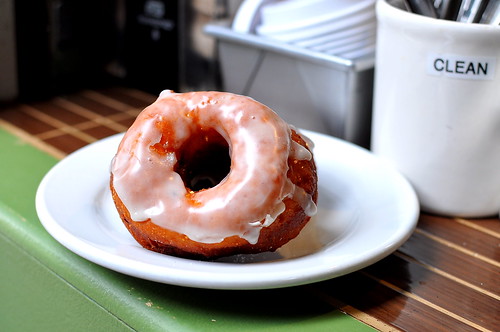 My friend A.J. indulged in a cornmeal and rosemary doughnut with dried cherries and a buttermilk glaze ($3). The coarse grains of cornmeal were a textural bonus.

Los Angeles has exactly 300 days to make my gourmet doughnut prediction a reality. Will someone step up to the plate? Pretty please?