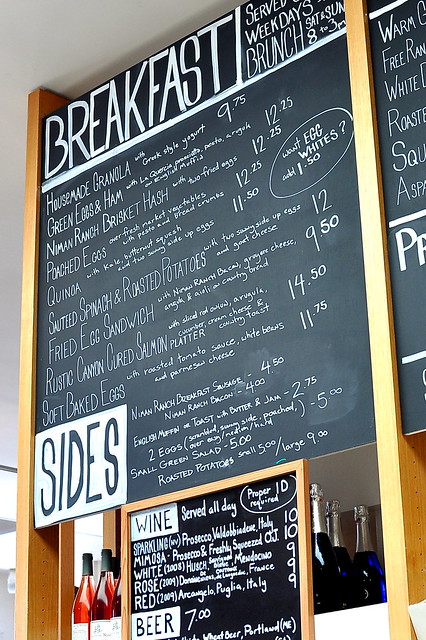 The first time I stepped into Huckleberry Cafe & Bakery, I turned my heels and walked out after thirty seconds. I had just moved to Los Angeles from Vietnam a few months prior and was unaccustomed to seeing baked goods priced at such a premium. Fist-sized plum crostatas were going for $7, while itty bitty cupcakes came in at $2. This serious case of sticker shock, not to mention the distance between my home and Santa Monica, kept me away from this adorable establishment for nearly two years.

A few Saturdays ago, I finally returned to Huckleberry for brunch along with The Astronomer, Laurie, and Bex. This time around, all of the prices appeared quite normal to me, signalling that I had finally gotten over my dong complex. Thank goodness. 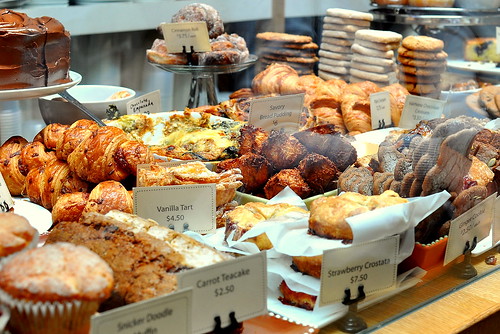 The brunch time protocol entailed waiting in an intimidatingly long line, placing our orders, and being seated swiftly by a dining room attendant. Not too long after we were seated at a table, the food arrived. 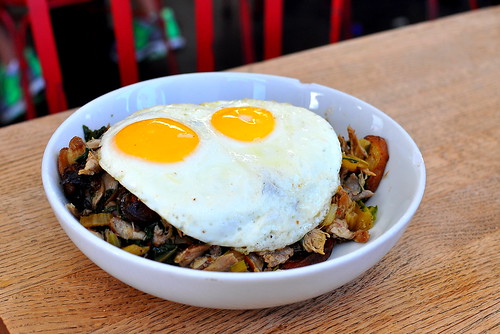 Bex’s duck hash with sunny side up eggs ($12.50) came highly recommended by friends and trusty news sources, but it turned out to be the lone flop of the day. The scraggly pieces of duck were under-seasoned and dry, while the eggs were overdone and not runny enough for our liking. Fortunately, there was a bottle of Tapatio on hand to give the hash a much needed boost. Still, the dish was rather disappointing this morning.

Laurie arrived a little later and ordered the Brussels sprout hash (not pictured). It wasn’t as sexy as the duck hash on paper, but its flavors were more cohesive and balanced. 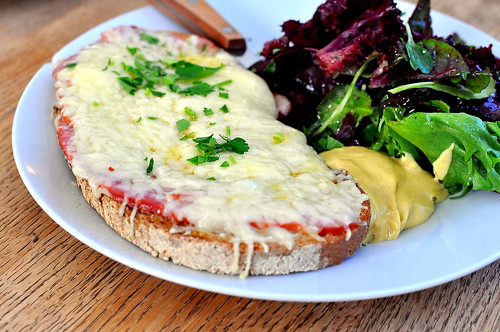 The Astronomer ordered the Croque Monsieur with Niman Ranch ham, cave-aged gruyere, and bechamel on country toast ($10.50). The rich toppings mellowed out nicely eaten with a bit of the spicy mustard and the lightly dressed greens. While The Astronomer thought that the Croque was quite good, it wasn’t as exceptional as the one he ate at Tartine in San Francisco. Huckleberry’s bread couldn’t hold up to the heavy toppings. 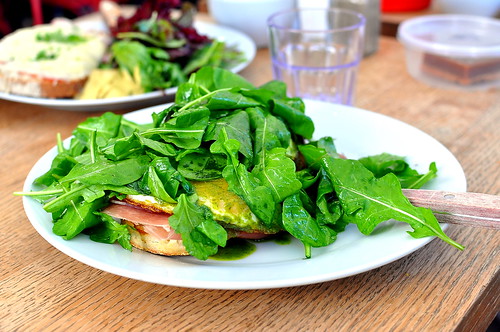 I ordered the green eggs and ham ($12.25), which was comprised of toasted English muffins topped with La Quercia prosciutto, sunny side up eggs, pesto, and arugula. A lot of arugula. 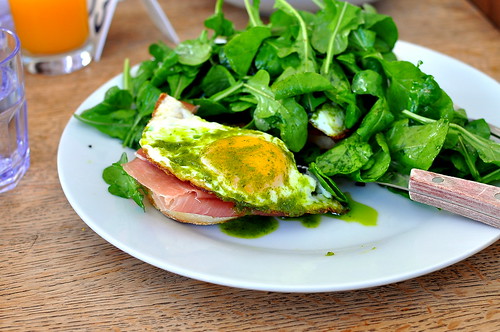 The dish’s key players weren’t as strong as they should’ve been. The muffin was over-toasted and difficult to cut through, while the eggs suffered from overdone yolks. The supporting cast, namely the pesto, ham, and arugula, were just about faultless. 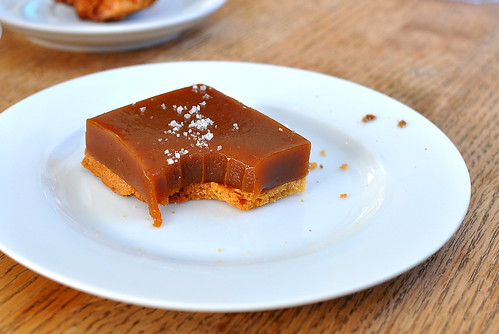 The absolute highlight of my meal at Huckleberry was the salted caramel bar ($2.50). Biting through its buttery shortbread crust and silky, salt-flecked caramel, I was seriously in heaven. Move over butterscotch budino, I’ve found a new favorite.

While I don’t think I’ll return to Huckleberry for brunch, I will swing by for a salted caramel bar anytime I’m within a ten mile radius. After all, it’s my favorite dessert in the city!