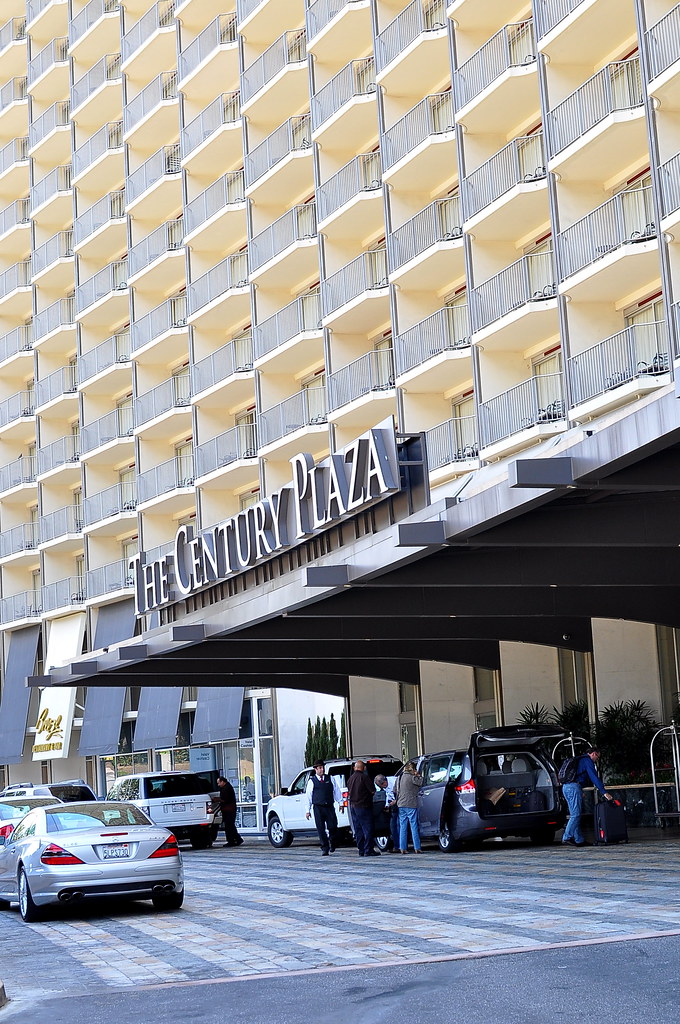 It all began with an invite to a press luncheon featuring Chef Manfred Lassahn’s new vegan menu offerings at Breeze, a restaurant on the first floor of the Hyatt Regency Century Plaza. The event was scheduled for a Monday afternoon, which meant that it would be impossible for worker bees stationed on the east side of town to attend. I replied to the invitation thanking them for thinking of me and letting them know that I wouldn’t be able to make it.

A few beats later, I received a follow-up email from the hotel’s director of public relations. She was sorry that I wouldn’t be able to attend the event, but invited me to swing by for a meal anytime and to make it a staycation if I so fancied. Needless to say, I very much fancied a vegan staycation and took her up on the offer. Sometimes, I just can’t believe my good fortune. 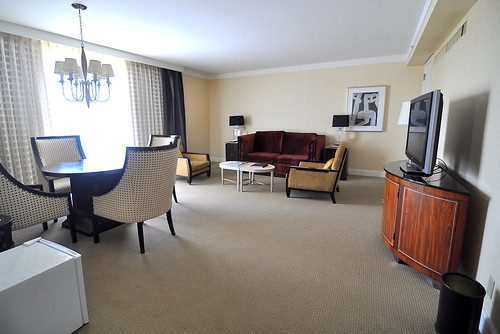 The Astronomer and I pulled up to the Hyatt Regency Century Plaza late one Saturday afternoon and checked into the most spacious suite ever. We’ve stayed in dozens of hotel rooms over the years, but this was the first one large enough to accommodate multiple cartwheels and a legitimate dance party. We did lots of the former, but left the latter for rowdier guests. 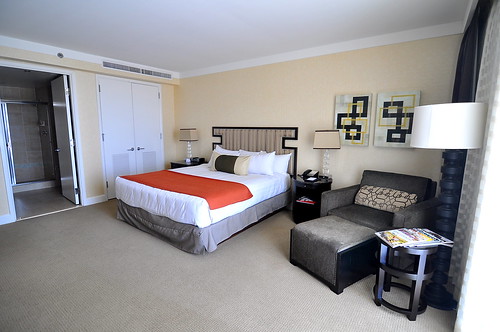 The bedroom was minimally furnished and tastefully appointed. The bed was a dream, of course. 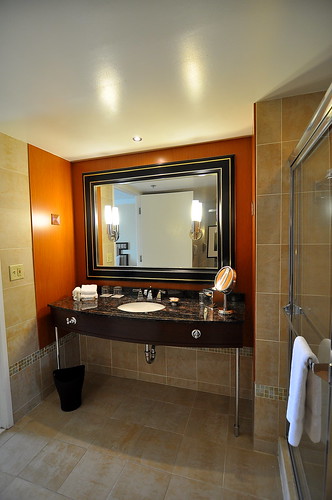 There were two bathrooms in the suite, one adjacent to the bedroom and the other by the front entrance. Both were decked out with fabulous products and tons of space. 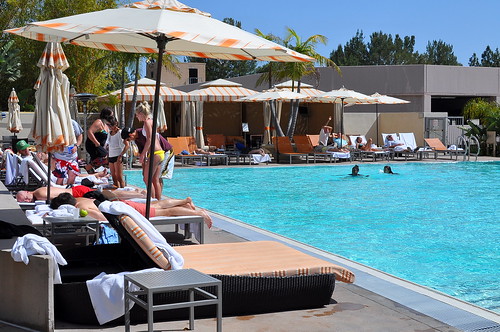 After dropping off our luggage and scoping out home base, The Astronomer and I headed to the pool to soak in the sun and people watch. The pool itself was square and standard, with plenty of lounging chairs and cabanas for guests and guests of guests. 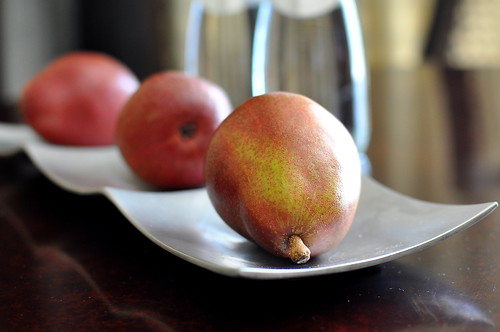 When we returned back to the room to freshen up for dinner, we saw that someone had dropped off fresh fruit and water for us while we were away. What a lovely touch! 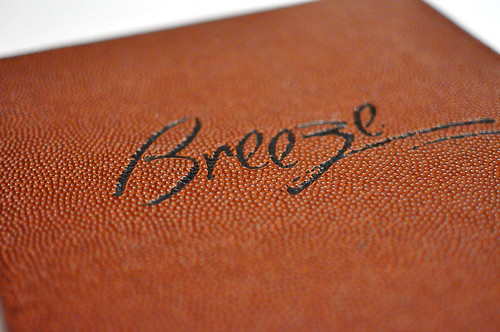 For dinner, we took the elevator to the first floor to dine at Breeze. Chef Manfred Lassahn wasn’t in the kitchen this evening, so we were left in the care of Sous Chef Bill Gardner. 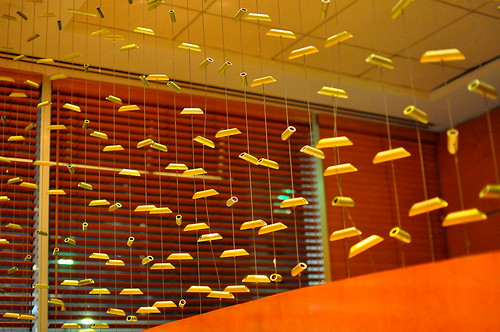 Breeze looks and feels like a typical hotel restaurant, but the menu is anything but standard. Alongside crowd pleasing offerings like grilled salmon and lobster ravioli, the restaurant has introduced several healthful vegan dishes. According to Chef Gardner, this is the first Hyatt property to bring  a meat- and dairy-less menu to guests. 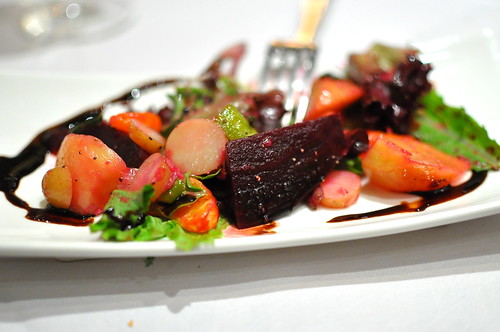 The vegan offerings were quite limited, so The Astronomer and I were able to try them all. First up was a simple, but well executed roasted beet salad with tangerines, new potatoes, oak leaves, and green onions. The shallot emulsion dressing was applied with care and coated the vegetables with a tangy finish. 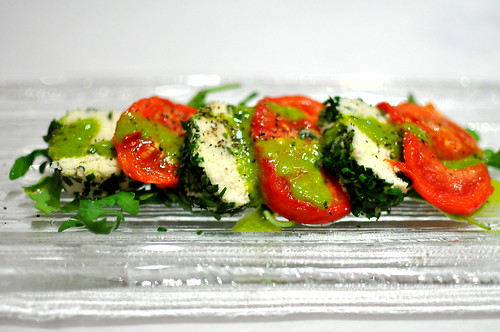 The second appetizer was the Macadamia Caprese. Rolled in a plethora of herbs, the house-made macadamia nut “cheese” was mildly flavored and crumbly like ricotta. Paired with the “cheese” were sweet and juicy oven-roasted tomatoes, baby mizuna, and a green olive oil dressing. While I would never mistake this dish for a classic caprese salad, I appreciated it for what it was. 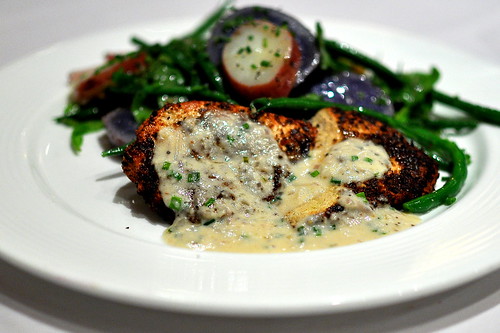 For the main course, we both ordered the Gardein Chicken. The two slabs of wheat gluten “chicken” were dressed in a cashew cream sauce and served with a green bean, fingerling potato, and purple potato salad.

I am no stranger to meat substitutes, and wheat gluten is definitely one of my favorites. I loved how the “chicken” was well-marinated and possessed a great char. I found the texture to be quite meaty and satisfying. 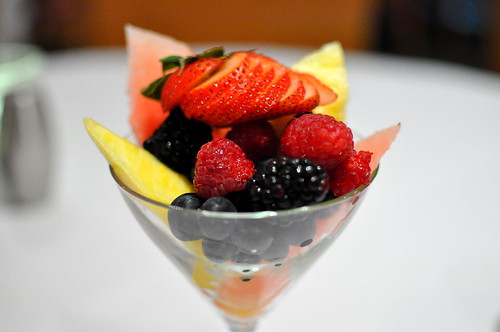 For dessert, we enjoyed fresh fruit since there weren’t any vegan sweets on the menu. I’ve heard that the selection of vegan desserts and savories is more varied at lunchtime.

Following dinner, we returned to our quiet suite and quickly caught some z’s. 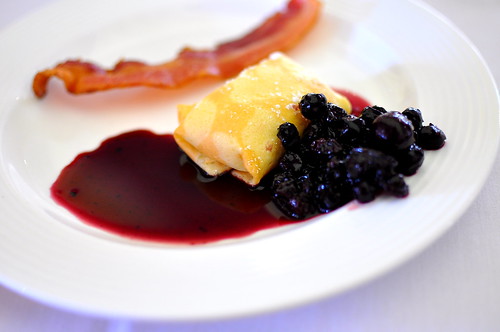 Before departing for home the following morning, we were treated to one final feast at the hotel’s Sunday brunch. It happened to be Easter, so the crowd was dressed in gay apparel and the spread was especially enticing. While I usually gravitate toward raw bar offerings, I was most smitten by the cheese blintzes with blueberries this morning. And to make up for my meatless meal the night before, I made sure to eat some bacon.

Thank you to the Hyatt Regency Century Plaza for making this 20-hour staycation possible. I had a mostly meatless ball.