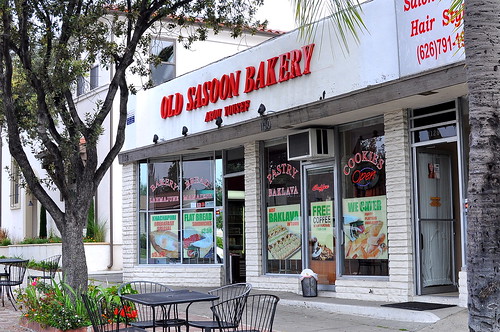 Old Sasoon Bakery has been high on my list of local places to check out ever since reading Tasting Table’s delectable report back in 2009. When The Astronomer had a speaking engagement at a high school located several buildings down from the shop, I took the opportunity to finally visit the famed Syrian bakery. I’d never realized it before, but Old Sasoon is located just a mile and half from my home—we’re practically neighbors! Shame on me for not coming in sooner. 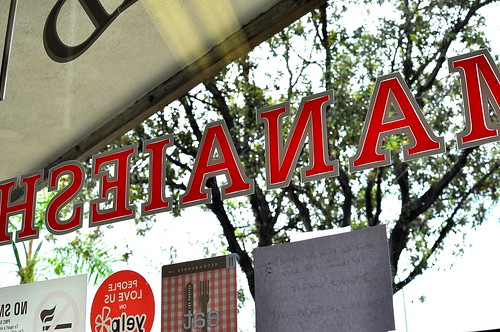 According to my friend Josh, the bakery was opened by Haroutioun Geragosian in 1986. It is named after a village in Armenia that his grandparents left after World War II. Today, the shop is run by Haroutioun’s son Joesph and several other family members.

The first thing I noticed when I walked into the store was how good the place smelled. Freshly baked goods perfumed the air both inside and outside the shop. The ambiance was laid back and efficient, just the way I like it. 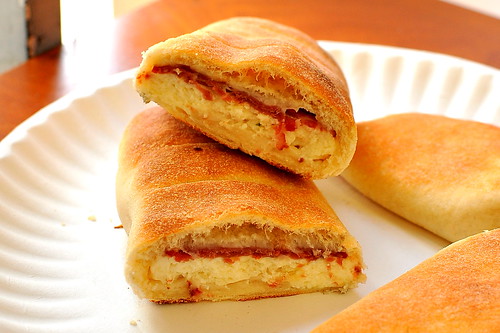 All of the baked goods are displayed behind a classic bakery case. After scanning the various levels, The Astronomer and I picked out way too much food for two people. We couldn’t help ourselves because everything sounded so interesting and was priced quite reasonably.

To start, I picked out three beorags (savory hand pies) that the woman behind the counter offered to lightly toast in the oven. The one filled with basturma ($2.50) was balanced nicely by the creamy cheese and fluffy bread. I love the unique flavor of Armenian cured beef. 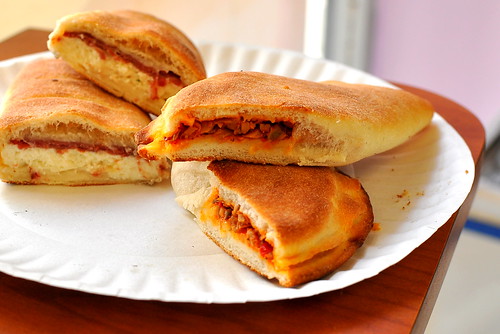 The mushroom-filled beorag ($1.50) was heavily spiced and dotted with tomatoes and onions. The placard said that it was made with fresh mushrooms, but the flavor wasn’t as earthy as I had hoped. 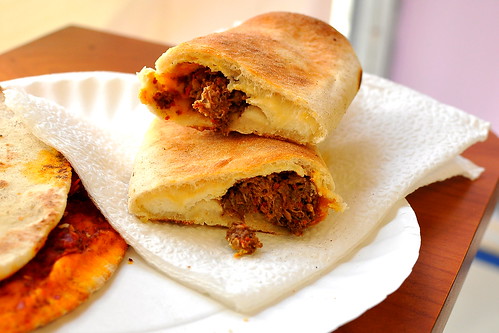 Old Sasoon’s house made soujouk sausages were milder than the punchy links at House of Basturma, but the beorag ($2.50) was satisfying nevertheless. 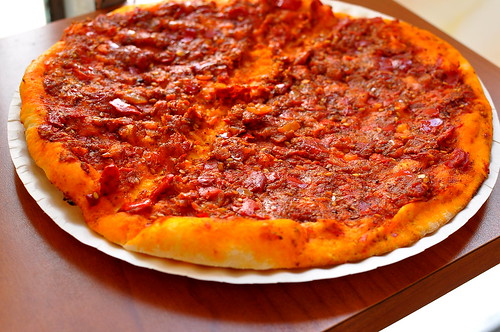 One of my favorite items that we tried this afternoon was the florescent orange lahmajoun ($1.50). The flatbread came slathered with zahtar (a blend of sesame seeds, powdered sumac, and dried thyme), chilies, onions, and red pepper sauce. The spices made my lips tingle with delight. On another visit, I tried the zahtar and cheese lahmajou that was equally delicious. 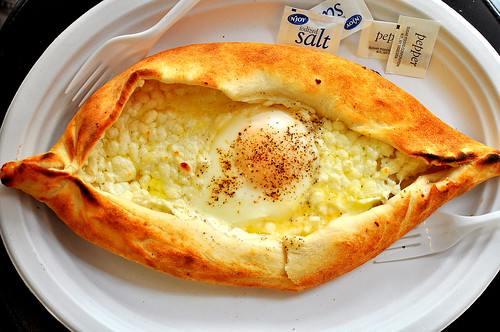 The final savory item that we sampled was a Georgian breakfast staple called khachapuri ($6). The boat-shaped flatbread was made to order and arrived at the table hot out of the oven. It was topped with a blend of cheeses, a single runny egg, and a few pats of melted butter. We found the seasoning to be just right and didn’t bother with the salt and pepper packets on the side of the platter.

To eat, we tore off a bit of the crust and ran it through the yolk, making sure to get some of the cheese and butter as well. It was so warm, so hearty, so rich, and so good. 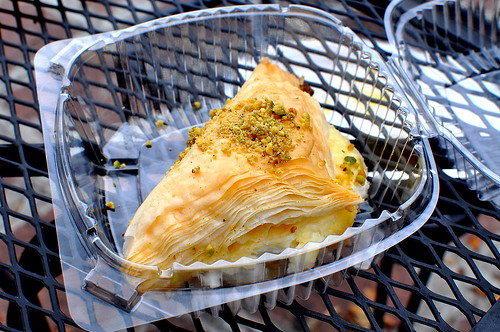 We were much too stuffed to eat the baklava ($3) at the shop, so we took it home for later. I was surprised to find that it was filled with a ricotta-like cheese rather than nuts.

It may have taken nearly two years for me to visit Old Sassoon, but I’ll certainly be a regular now that I know how incredible the lahmajoun and khachapuri are. And best of all, it’s so close to home.