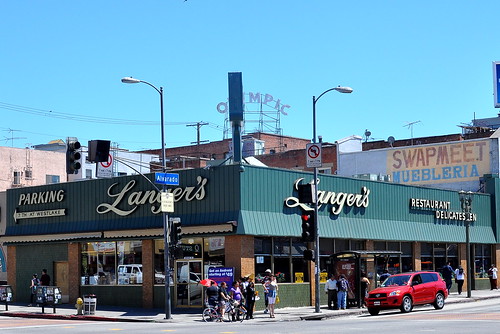 After lunching on two not-so-memorable sandwiches at Bay Cities and The Spice Table, I finally struck sandwich gold at Langer’s Delicatessen. Located across from MacArthur Park on the cusp of Koreatown, Langer’s has been smoking, steaming, and hand-slicing their world famous pastrami for over sixty years.

The Astronomer and I were inspired to make our way here after sampling the amazing smoked meat sandwiches at Schwartz’s in Montréal. While smoked meat and pastrami aren’t exactly the same beast, we were curious to see how the two compared and whether one was superior to the other. 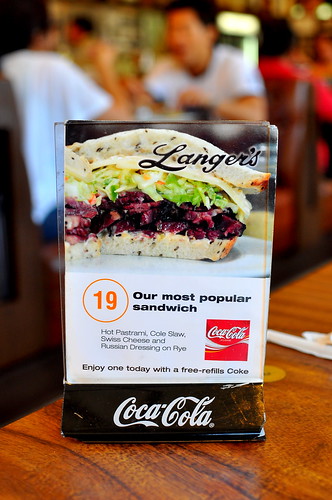 Joining us for lunch were our friends and fellow Langer’s newbies Lien and Diana. We were seated at a table fit for four in Joan’s jurisdiction. Even though we only understood every other word she hushed, we all agreed that Joan was hands-down the greatest waitress ever. 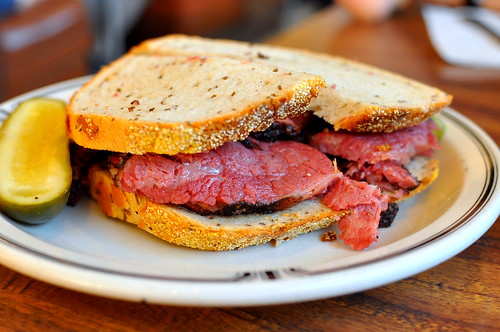 All three of my dining companions ordered the unadorned hot pastrami sandwich ($12.95). Diana opted for an “extra lean” version that cost an additional $3.25. The sandwiches were served with two spears of dill pickles on the side. 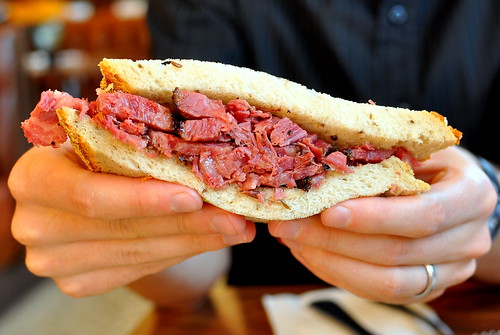 Langer’s pastrami is made from whole brisket that’s been rubbed with spices, smoked, and steamed. The pastrami is sliced thick and piled neatly on double-baked rye.

While The Astronomer liked his sandwich very much, he found the seasonings less bold and the meat less rich than the smoked meat in Montréal. Both Lien and Diana reached for the spicy mustard after taking bites without and found that it was just the thing to complement the meat. 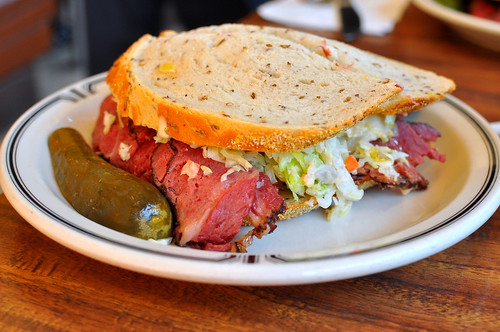 I couldn’t resist ordering the #19, the most popular sandwich on the menu. Tucked in between two impressively sturdy slices of rye bread were pastrami, Swiss cheese, coleslaw, and Russian dressing. It was a monstrously portioned creation, and I was beyond thrilled to dig into it. 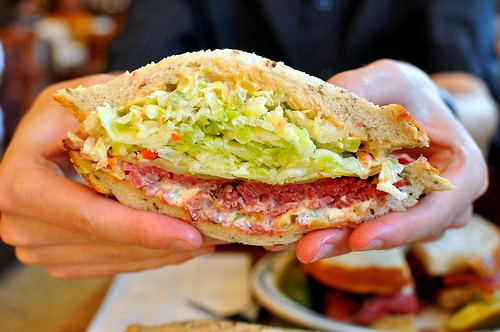 Whereas my dining companions needed to add a smear of mustard to their sandwiches, mine arrived dressed to the nines and sensational from top to bottom. It was impossible to discern the pastrami’s flavor and texture amidst all the fixings, but I didn’t care because the entire package was so damn satisfying.

I loved how the meat married with the tangy dressing and coleslaw, while the bread valiantly held together all the saucy stuff. The #19 lived up to the hype and then some. Open wide! 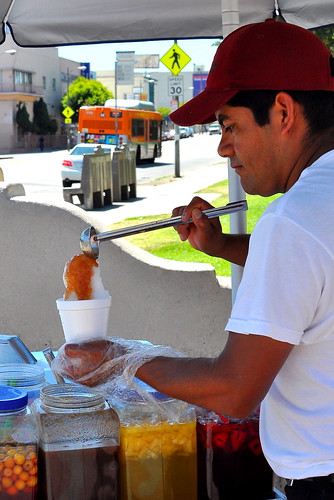 Following our fabulous lunch, The Astronomer and I stumbled upon a shaved ice vendor on the edge of MacArthur Park. 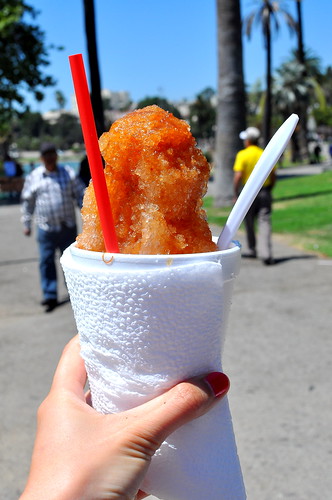 We ordered one shaved ice drizzled with tart tamarind syrup ($2). It was a perfectly refreshing treat to close out the afternoon. Thanks for restoring my faith in sandwiches, Langer’s.