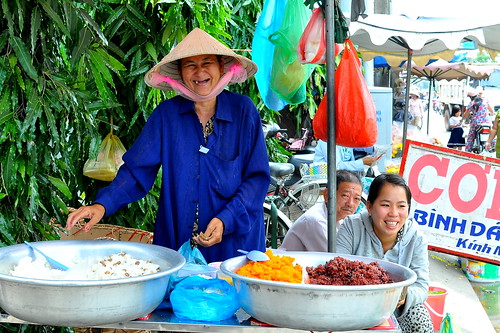 The Astronomer and I began our third day in Saigon across the river in District 4, a densely packed island we called home for the better part of a year. In the three years since we’ve been gone, the old neighborhood has undergone quite a makeover. While the river is still as murky as ever, dirt roads have been transformed into sturdy bridges and run-down shacks have given way to shiny highrises. The lay of the land was so unfamiliar that The Astronomer had trouble navigating the streets at several turns. Rapid development can be mighty disorienting. 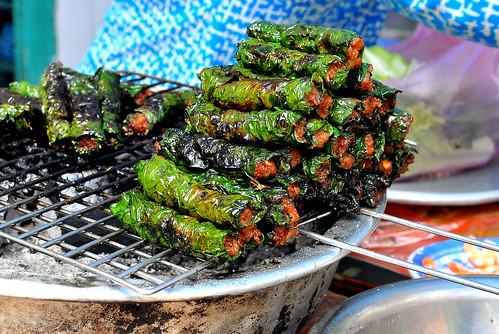 Fortunately, the vibrant street food scene hasn’t changed one bit. After stopping to pick up some xoi gac from my my favorite sticky rice vendor on Ton That Thuyet Street (pictured above), we searched the district for more good eats.

The smell of grilled seasoned beef wrapped in betel leaves brought our motorbike to a rapid halt. Even though we had just eaten bo la lot a few meals ago, it was too tempting to pass up. 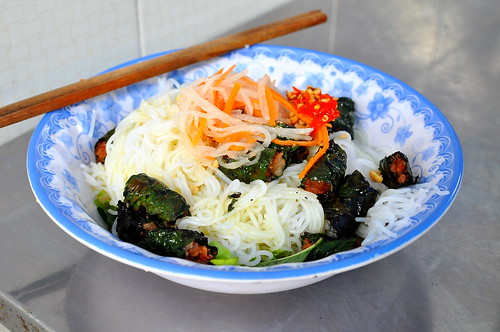 The Astronomer’s bowl of bun bo la lot was piled high with herbs and sprouts tucked underneath a tangle of cool vermicelli noodles, peanuts, pickled carrots and daikon, and a swipe of crushed fresh chilies. Everything was evenly dressed with fish sauce. The best bites included a pinky-sized bo la lot nugget. 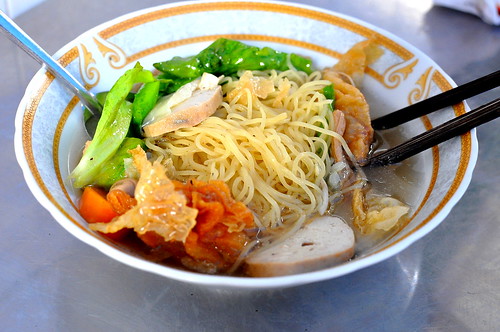 I ordered a bowl of vegetarian noodles from the bo la lot vendor’s neighbor. There usually isn’t much vegetarian street food, but because it was the mid-Autumn moon festival, many vendors were catering to local Buddhists refraining from meat.

With heaps of noodles, plenty of mock meat, and a savory broth, the bowl of noodles was totally satisfying. Vietnamese vegetarian food is the best. 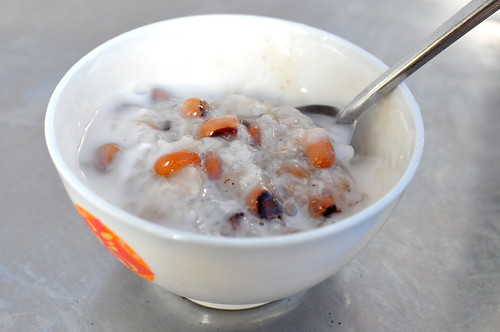 As luck would have it, a che seller was stationed on the other side of the bo la lot stand. For dessert, I dug into a bowl of che dau trang comprised of sweet glutinous rice, black eye peas, and warm coconut milk. 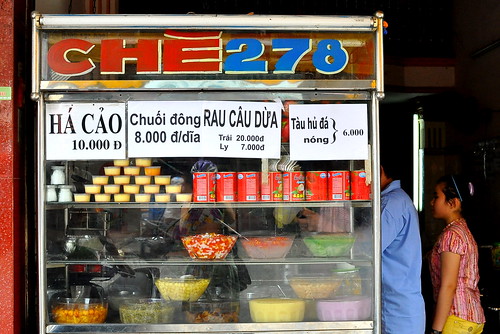 Before bidding the District farewell, we made one final stop at Che 278. The Astronomer and I used to frequent this snack shack every Sunday afternoon before dropping me off at work at the Saigon Times. Ah, memories… 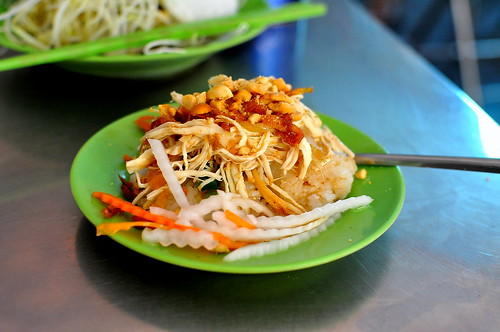 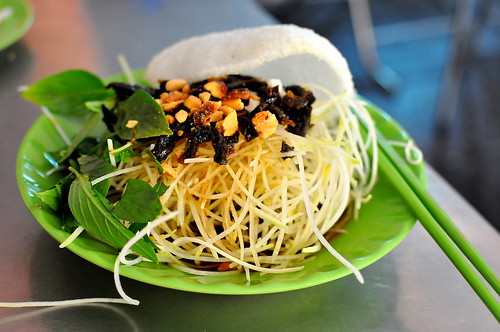 And a plate of goi du du kho bo—green papaya salad with fresh basil, a shrimp chip, strips of beef jerky, and crushed peanuts. Both dishes were deliciously nostalgic. 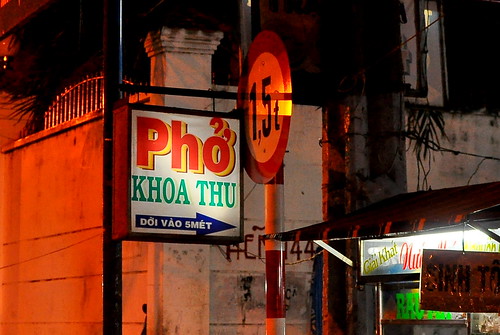 We returned to District 4 a few nights later when The Astronomer was craving pho bo from Pho Khoa Thu. He discovered this roadside stand toward the end of our stay in Vietnam and has yet to find a bowl of pho anywhere that can top it. 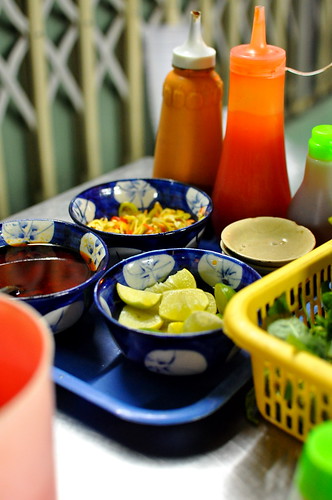 Southern style pho is all about garnishing, dressing, and seasoning as one sees fit. Our table was decked out with limes, chilies, chili oil, chili paste, hoisin sauce, fish sauce… 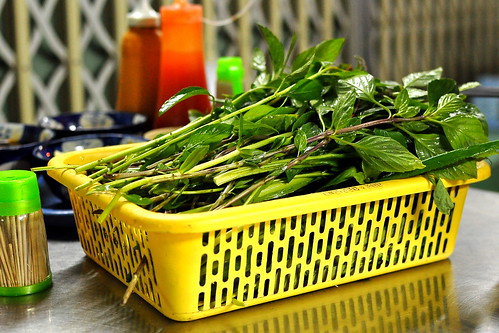 …and the biggest basket of fresh basil and saw-tooth herb. I added plenty of fresh herbs to my bowl and made a saucy concoction of chili oil and lime juice to dip slices of rare beef in. 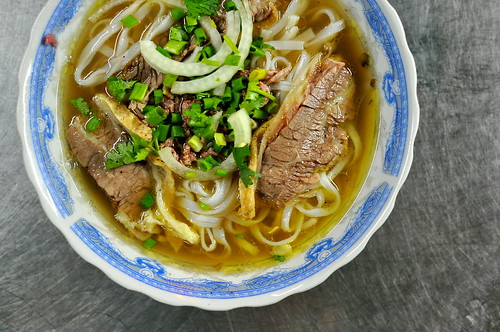 Our bowls of pho came with an assortment of tendon, flank, and rare beef served over wide rice noodles and topped with a mixture of white onions, scallions, and cilantro. The broth at Pho Khoa Thu is oily, rich, and aromatic like you wouldn’t believe. In fact, it was the aroma of anise and charred onions wafting in the night air that originally seduced The Astronomer into visiting the stand. 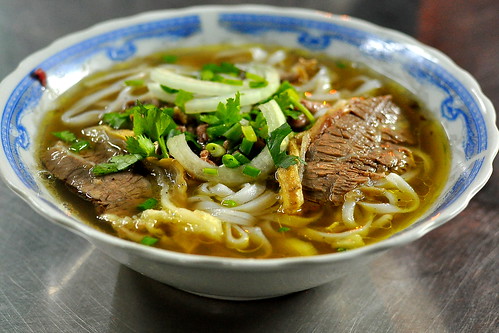 Both of us buried our faces in our bowls of pho and didn’t look up until the contents were emptied. Some things are meant to be savored in peace.

District 4 is truly our home away from home.

13 thoughts on “District 4, Saigon: Our Home Away From Home”