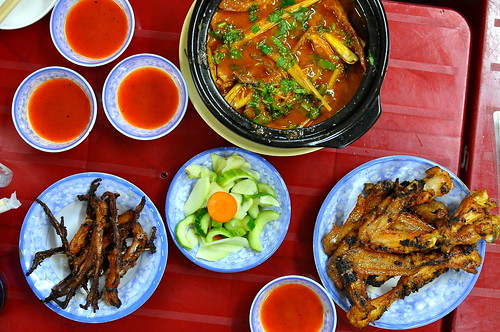 The Astronomer and I met up with our friends Chris and Ann for a belly-busting food crawl on our second night in Saigon. We kicked things off in familiar fashion with steaming bowls of noodle soup, but soon moved on to novel delicacies including spicy duck tongues and goopy hard-boiled eggs.

As much as I love revisiting my old haunts in this city, it was a welcome change of pace to be introduced to new grubbin’ spots. It’s an endless feast up in here. 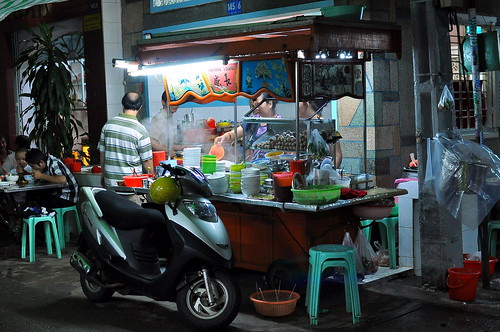 After meeting at our hotel, the four of us headed to an alleyway nearby for the first of three courses. Chris is a huge fan of the bo vien (beef meatballs) served at Truong Thanh and insisted that we begin the crawl there.

The food served at Truong Thanh is prepared outdoors on a cart, while patrons are seated in a sparse and well-lit dining room two paces away. Chris and Ann took the lead and placed the orders. The Astronomer and I kicked back and relaxed. 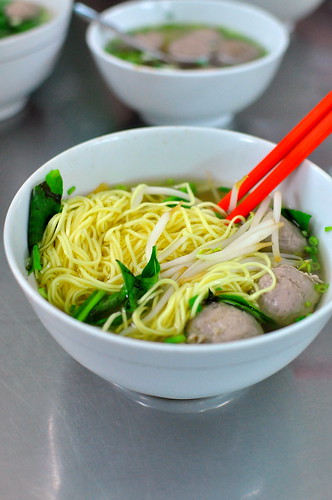 The restaurant’s signature dish is a simple and satisfying combination of mi (Chinese egg noodles) or hu tieu (wide rice noodles) with meatballs, bean sprouts, basil, and saw-tooth herb. The broth is the same for both types of noodles, porky and mild.

The highlights of the bowl were the squeaky meatballs. Eaten on their own I found them to be quite plain, but dipped in the sate oil, chili sauce, and hoisin sauce served alongside, the flavors popped just a little more. 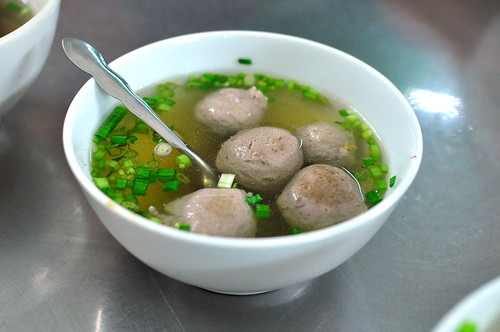 To supplement our modestly portioned bowls of noodles, Chris ordered an extra portion of bo vien… 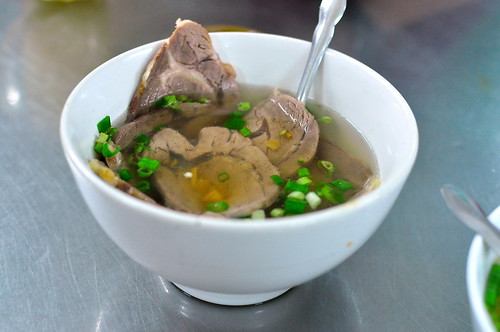 …as well as slices of tender flank. 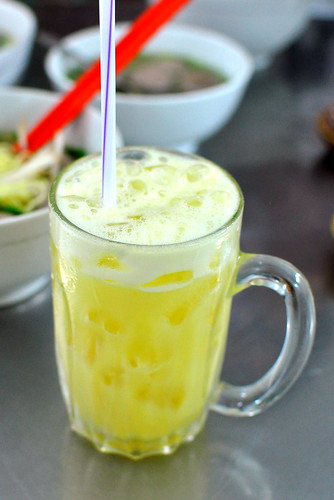 To wash everything down, we sipped cold glasses of nuoc mia (sugarcane juice). The slightest squeeze of fresh kumquat mellowed the drink’s sugary rush and brightened up the entire glass. I can’t get enough of this stuff. 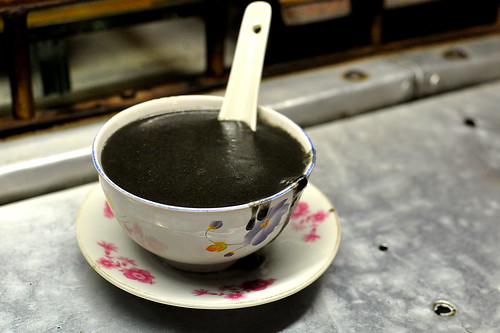 The che me den looked like the La Brea Tar Pits, but tasted like a warm, smooth, and comforting dream. The distinct essence of black sesame was front and center, while rich and creamy coconut milk rounded out the flavors. 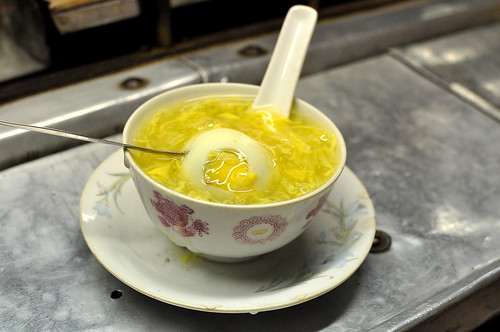 On a whim, we also ordered a bowl of che trung. I’ve eaten a lot of che in my day, but have never encountered anything quite like this. The dessert consisted of a hard boiled egg bobbing about in a sweet and viscous liquid surrounded by soft egg curds. I wasn’t sure how such a combination of ingredients would translate as a dessert, but the flavors and textures worked surprisingly well. 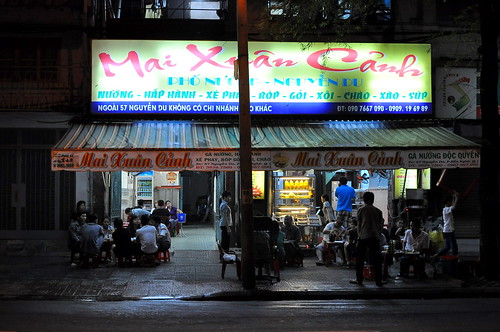 Our third and final stop brought us to Mai Xuan Canh in District 1, a rowdy joint grilling fine feathered friends and serving plenty of cold beers. 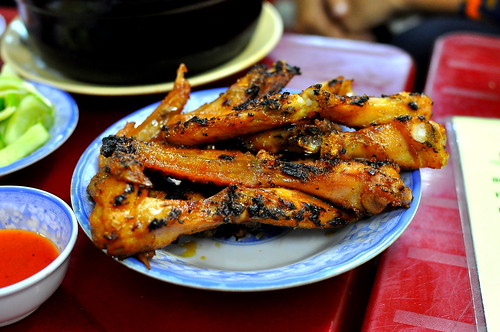 According to Anne, the specialty here are grilled chicken wings. The marinade is deceivingly savory to start, with a lingering heat that doesn’t let go. 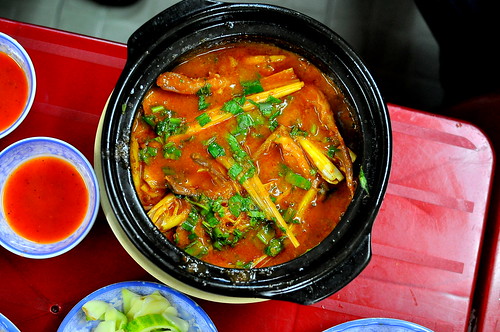 The burn continued with the luoi vit Sapo—stewed duck tongues with chilies and lemongrass. The bubbling brew that the tongues came swimming in was so delicious that we ordered baguettes to sop it up. 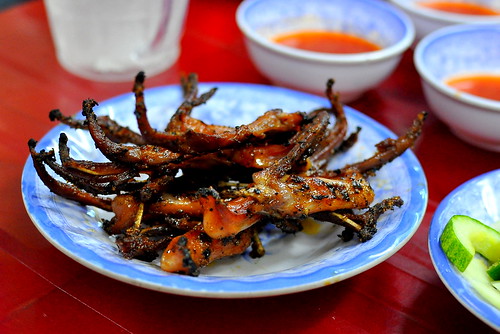 We also ordered a plate of grilled duck tongues that echoed the flavors of the grilled chicken wings. 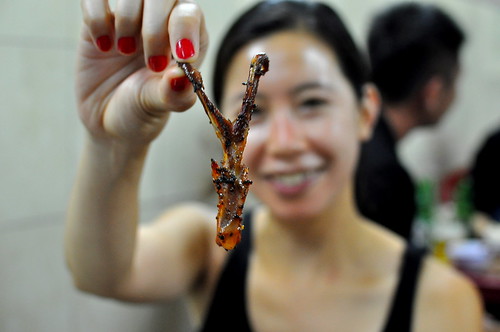 All of the tongues were served on the bone, which required a bit of maneuvering to extract. The texture of the tiny overhang was awesomely snappy and so very supple. I need more luoi vit in my life. 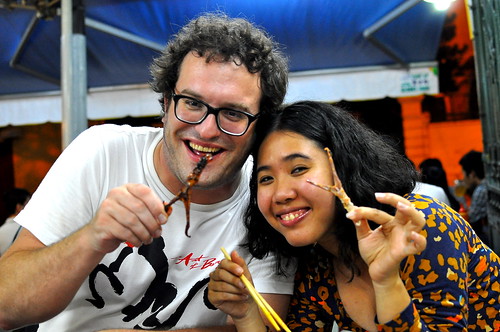 Thank you to Chris and Anne for showing two American kids around. Our bellies salute you.