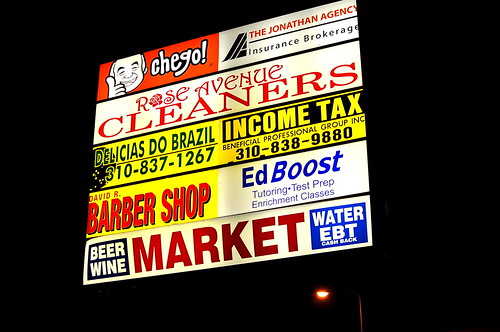 Back in mid-February, I was invited to speak on a panel about food trucks at UCLA. I wasn’t sure if I’d have much to contribute to the dialogue, but couldn’t refuse once I heard the line up. Joining in the discussion were Chef Roy Choi (founder of Kogi), Erik Cho and Brooke Howell (founders of Frysmith), and Natasha Case and Freya Estreller (founders of Cool Haus). Moderating the talk was none other than wordsmith extraordinaire, Jonathan Gold. I had to say yes.

As anticipated, the evening’s conversation was more about the business of trucking than the business of blogging, so I sat back and listened while my fellow panelists discussed their experiences. The highlight of it all was Chef Choi’s anecdotes about the genesis of Kogi and his passion for Los Angeles. I walked away from the talk craving his brand of bold Korean food with a distinctly L.A. soul. And thus, the “Roy Choi Restaurant Tour” was born. 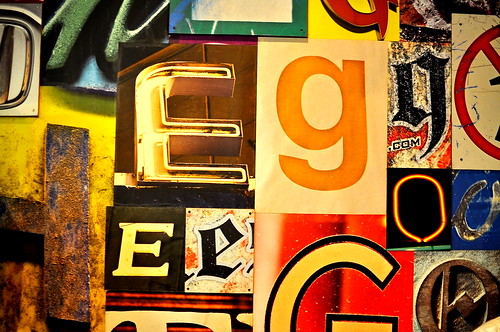 After the tremendous success of Kogi, Chef followed it up with a rice bowl venture called Chego, which roughly translates to “the best.” The concept was inspired in part by the rice-bowl-hawking tenants who previously occupied the restaurant’s space, as well as the Chinese oven that they left behind. When Chef saw the metal box in the kitchen, he knew it would be perfect for cooking all manner of proteins slow and low. 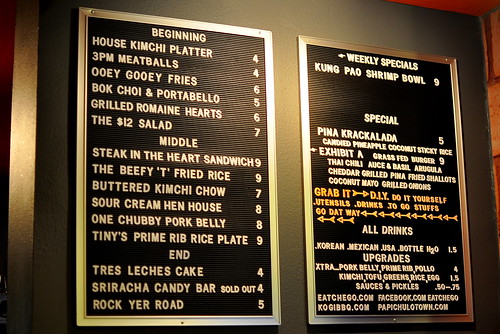 The Astronomer and I dined here on a Saturday night along with our friends Nastassia and Reed. The line for grub stretched into the parking lot when we arrived, but it didn’t take too long to get through. We perused the menu upon making our way to the front and were pleased to find that everything from “Beginning” to “Middle” to “End” was priced under $10. 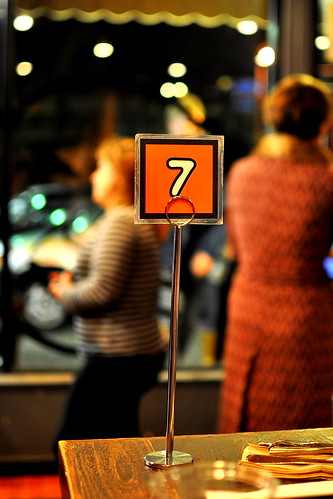 After our party of four placed our order for four starters, four mains, and two desserts, we took our numbers and grab a spot at the standing-only communal table. We relocated to a table with seats later in the meal when adequate space had opened up. 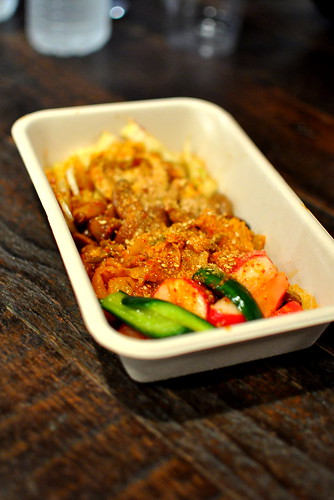 The first starter to arrive was the “5 Flavor Kimchi Sampler” ($4), which included a radish kimchi, fennel kimchi, cucumber kimchi, garlic kimchi, and traditional cabbage kimchi. While Nastassia fancied the snappy radish variety, I couldn’t get enough of the roasted garlic cloves, which were sweet, spicy, and just fermented enough. 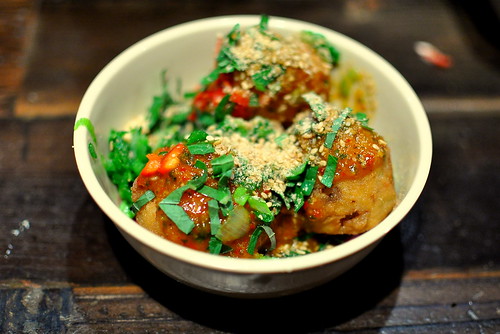 The “3PM Meatballs” ($4) served atop a polenta patty were also a big hit with our table. The fresh flecks of basil brightened the bowl, while the chilies left our tongues afire. 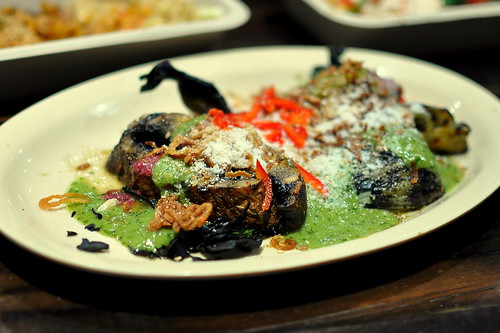 The flame-licked “Bok Choi and Portabello” ($5) with roasted garlic and cilantro salsa, chillies, Parmesan, and lemon was a sloppy, saucy, and spicy plateful. It was truly the antithesis of the style of California cuisine in which pristine ingredients are minimally fussed, and in all honesty, I kind of loved it. 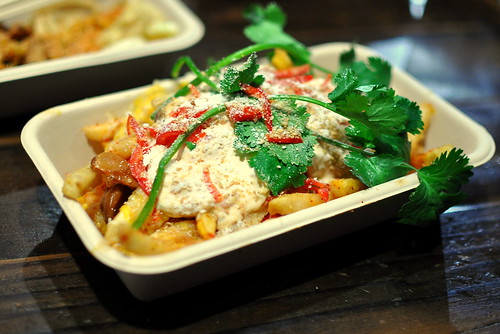 The starter that topped all others was the “Ooey Gooey Fries” ($6), which came generously topped with sour cream sambal, three types of cheese (Monterrey Jack, cheddar, and cotija), chillies, cilantro, and pickled garlic. Between the crispy fries and “ooey gooey” cheese, it was impossible to keep our hands away from this platter of dude food. 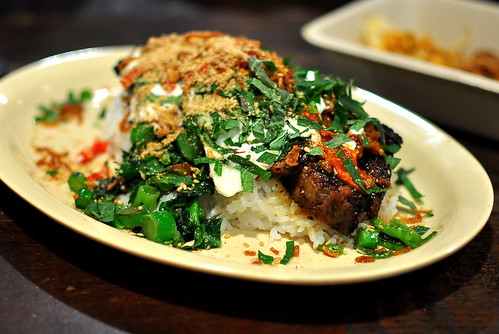 I stole a piece of prime rib from Nastassia and Reed’s “Beefy T” rice plate ($9) and was impressed by its char and tenderness. Served alongside were hot chili fried rice, herbs everywhere, and a beautifully fried egg. 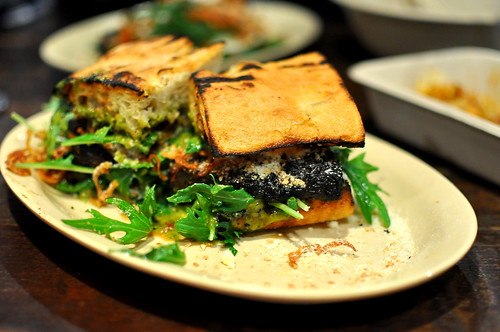 The one dish that I failed to sample was Nastassia and Reed’s “Steak in the Heart” ($9). The prime rib sandwich, which was served on grilled ciabatta with wok-seared onions, roasted garlic Irish butter, cheese, and a mysterious “green sauce,” was all sorts of good, according to The Astronomer. He found it less saucy than the other dishes at the table and very appealing in its own way. 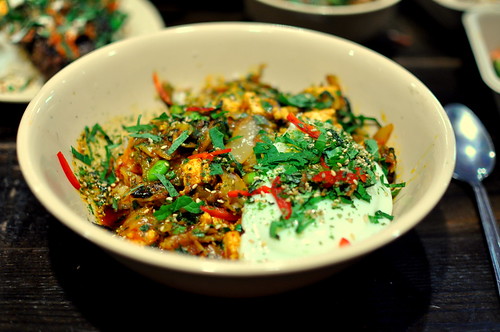 The Astronomer and I both ordered Chego’s signature rice bowls, which Chef Choi playfully refers to as “refrigerator food.” Growing up, he constructed similar mash ups based on what was hanging out in the fridge; it was his standby after school snack.

My “Buttered Kimchi Chow” ($7) was a dashing specimen of hot and buttered kimchi, fried egg, red chilli tofu, edamame, gaenip (sesame leaves), garlic soy jus, chicharrones, and a sprinkling of furikake. All mixed up and tied together with a runny yolk, it packed an avalanche of flavor and heat. 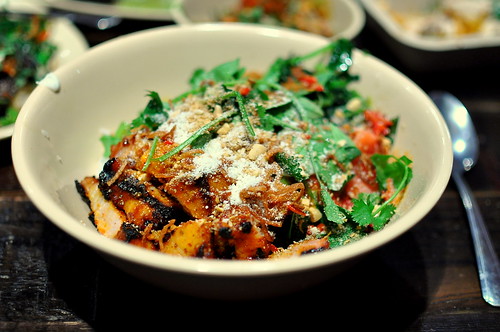 The Astronomer’s “Chubby Pork Belly” ($8) was equally bold with its gochujang-lacquered Kurobuta, fried egg, pickled radishes, water spinach, Chinese broccoli, cotija, and peanuts. At this point in the meal, all of the flavors more or less blended together as we swapped dishes and stole bites. Still, we couldn’t help eating more than our fill because the food was so damn addicting. 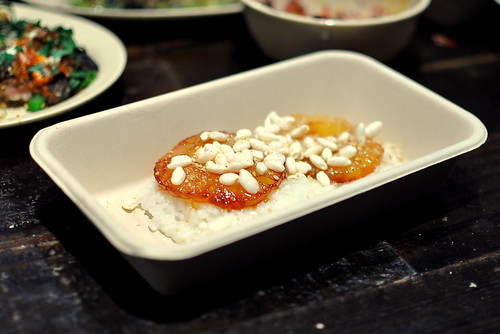 We moved next to a trio of desserts. The “Piña Krackalada” ($5), a riff off the classic Thai dessert featuring mangoes with sticky rice, contained warm coconut sticky rice with candied pineapple and puffed rice. The caramelized rings made this dessert something special. 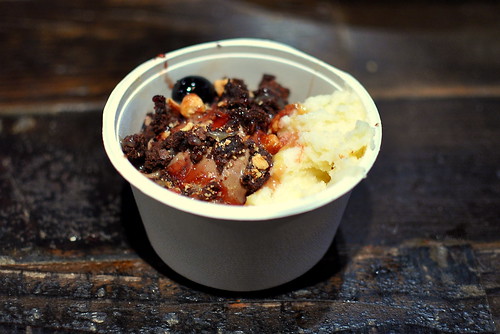 The “Rock Yer Road” ($5) was a fun cup full of chocolate ice cream, caramel, brownies, marshmallow fluff, and a Luxardo cherry. The fluff looked like mashed potatoes but tasted like heaven. 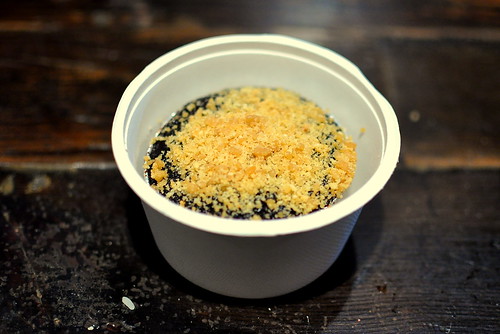 The Tres Leches ($4) made with devil’s food cake soaked in cayenne-cinnamon-infused leches was gifted to us by Chef Choi. The spiced peanut dusting on top added some texture, but it was hardly distinguishable when eaten with the cake.

From beginning, middle, to end, Chego brought the thrills. Next stop, A-Frame.

There’s more to eat in Palms: