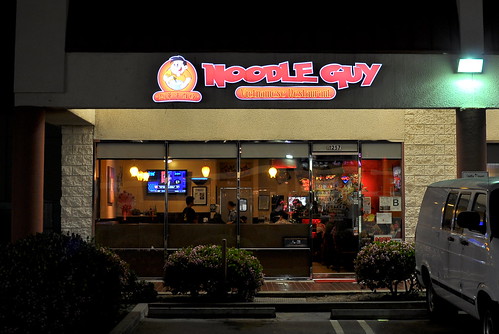 Friday night called for something warm and comforting for dinner. It’s been one of the mildest winters in recent memory, but temps hovered in the fifties this evening and storms were rolling in from points north. After assessing the possibilities in and around the neighborhood, The Astronomer and I decided that a short drive to Alhambra for Vietnamese beef noodle soup was the order of the day. 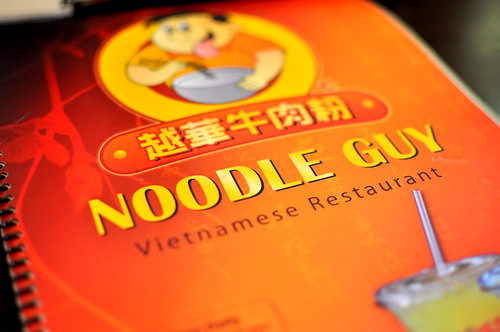 Noodle Guy, not to be confused with Noodle King two doors down or Noodle Boy in nearby Rosemead, serves Vietnam’s greatest hits. From broken rice to spring rolls, there’s enough variety here to fill a thick, spiral-bound booklet. However, glancing around the dining room, it seemed that most everyone was burying their faces into a big bowl of pho. 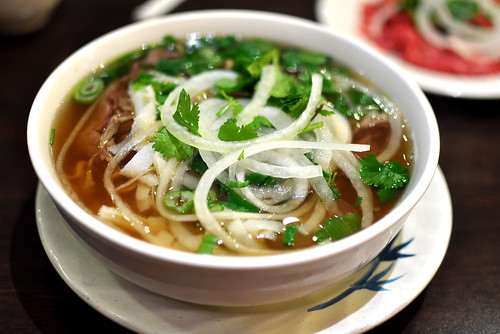 Taking a cue from my fellow Noodle Guy-goers, I ordered a bowl of pho bo dac biet. Beneath the heap of chopped cilantro and sliced onions was a bed of rice noodles and a delectable collection of meaty odds and ends including flank, brisket, tendon, and tripe. 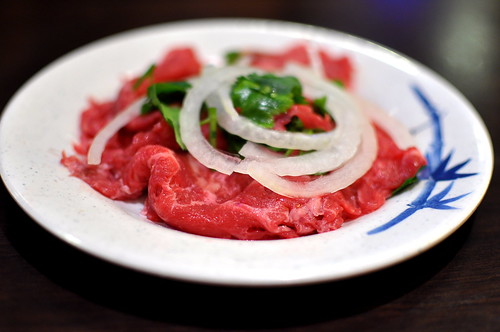 To add further excitement to my bowl, I requested Kobe beef in place of standard rare beef. While nicer pho restaurants have been offering filet mignon for years, Noodle Guy claims to be the first to bring American Wagyu to the fore. The petite plate of well-marbled meat bumped the price of my pho up to $14.99, making it the most expensive bowl I’ve ever encountered. 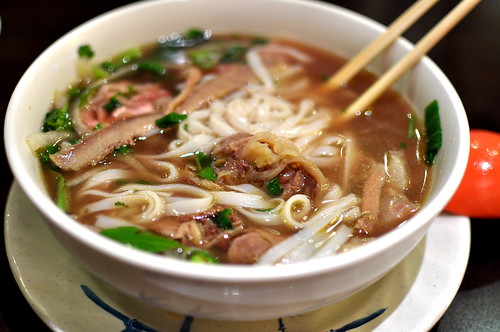 Noodle Guy’s pho really hit the spot. The broth, which could’ve been a touch hotter, struck a balance between bold beef flavor and classic aromatics, with just enough fish sauce to make it perfectly slurpable. The Kobe beef  supplement added superbly tender bites into the mix. While it’d be slightly painful to pay $15 every time a pho craving hit, this bowl is definitely worthy of a once-in-a-while splurge. 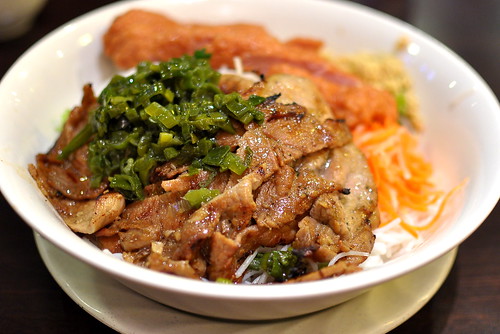 The Astronomer was pleased enough with his bun nem nuong thit nuong ($6.25), cold vermicelli noodles with two kinds of pork. His only complaint was that the nuoc cham (fish sauce vinaigrette) was lacking its characteristic pow. He had to drench his noodles with two portions of the stuff for it to register on his palate, which left his noodles in a soupy mess.

Noodle Guy is one helluva guy. I’ll be back for more fancy pho.