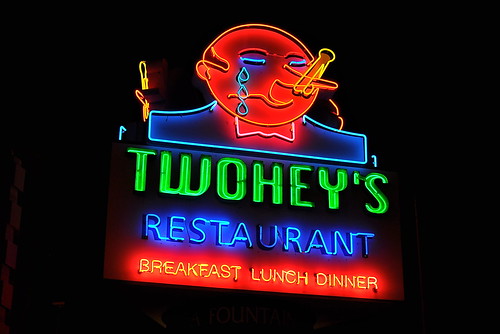 It is a tradition among my food blogging friends, especially those dining in and around the San Gabriel Valley, to sip milk tea following late night meals. Chewy tapioca balls are a common add on, but usually my company prefers their drinks straight up and fully caffeinated. While a post-dinner milk tea is perfectly lovely, I’d like to propose a new ritual that’s equally sweet, social, and local: hot fudge sundaes at Twohey’s Restaurant in Alhambra. 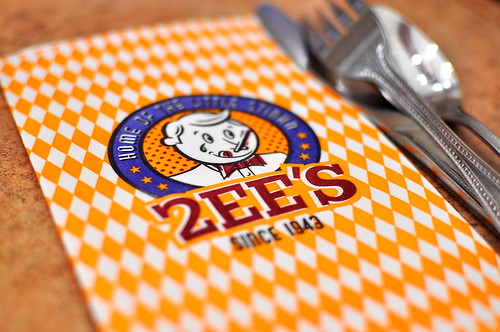 Twohey’s (pronounced “2EE’s”) has been around the San Gabriel Valley since 1943. The restaurant’s symbol, a gentleman with a clothes pin pinching his nose and tears running down his cheeks, is known as “The Little Stinko-O.” It was trademarked by the restaurant’s founder Jack Twohey upon overhearing a woman exclaim, “Oh, Stink-O,” when a patron seated next to her was served a hamburger garnished generously with onions and pickles. True story. 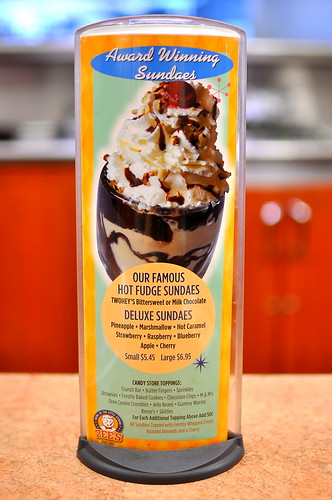 The Astronomer and I have driven past Twohey’s florescent-lit “Little Stinko-O” sign hundreds of times over the years, but it wasn’t until Jonathan Gold mentioned the restaurant’s famous hot fudge sundaes in an old column that I had any desire to check it out. Following last Friday night’s pho feast at Noodle Guy, it was finally time to put my curiosities to rest. 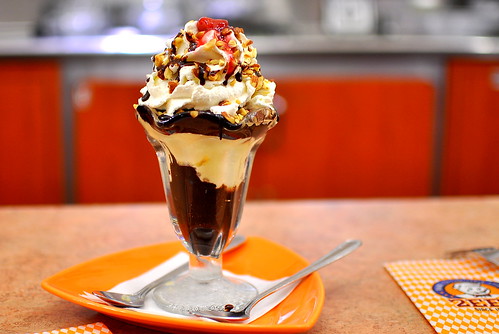 The Astronomer and I grabbed two open seats along the Formica counter and placed our order soon after. A “small” sized sundae ($5.45), which came with two scoops of Fosselman’s vanilla ice cream and all the traditional trimmings (whipped cream, roasted almonds, and a cherry on top), was the perfect size for us. 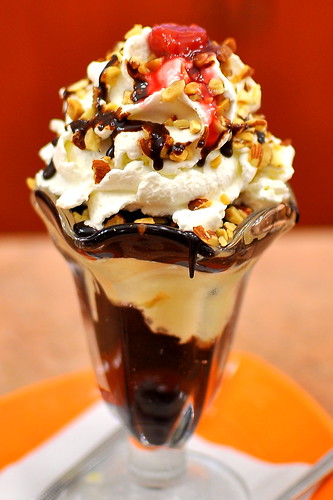 Twohey’s hot fudge sundae made me feel like a kid again. The familiar flavors instantly took me back to childhood birthday parties at Ferrell’s. All that was missing was a self-playing piano and a sundae delivered via a stretcher. The best part was near the bottom of the glass, where the fudge was thick and still hot. I love it when warm fronts and cold fronts collide. Every spoonful was a joy, and we didn’t quit until the glass was scraped clean.

This could definitely be a new tradition.