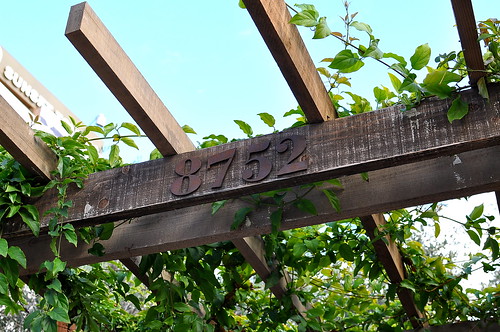 Stepping into Eveleigh (pronounced “Everly”) last Sunday evening, The Astronomer and I were transported far from the Sunset Strip. With its decidedly rustic vibe and vintage touches, the restaurant felt like it was plucked off a Napa Valley vineyard and plopped down in bustling West Hollywood. The space had a charm about it that just wouldn’t stop. 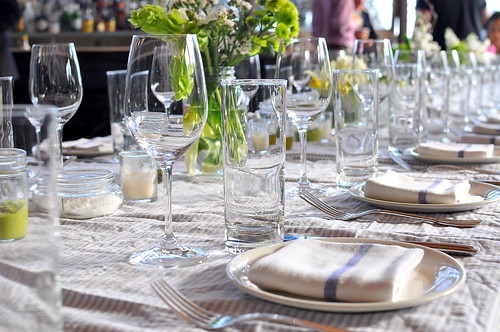 An invite to Eveleigh’s first ever Sunday Supper was the reason for our visit. Upon arriving at the restaurant and checking in with the hostess, we were led to the back patio, where an expansive communal table was set. With spectacular views overlooking the city and the sun setting in the distance, the scene could not have been any more idyllic. 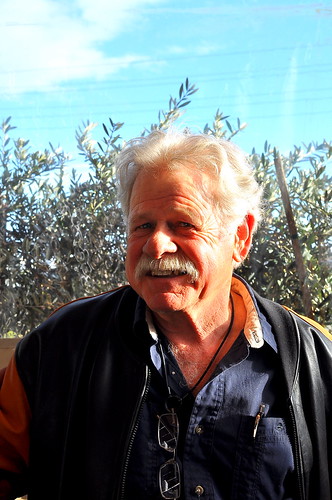 Windrose Farms, a small family farm located east of Paso Robles, provided all of the produce and proteins for this inaugural event. Bill Spencer, who owns the farm along with his wife Barbara, was on hand to educate diners about everything from biodynamic agriculture to the difference between a lamb and a hogget. The evening’s convivial spirit was reminiscent of the Outstanding in the Field dinner series. 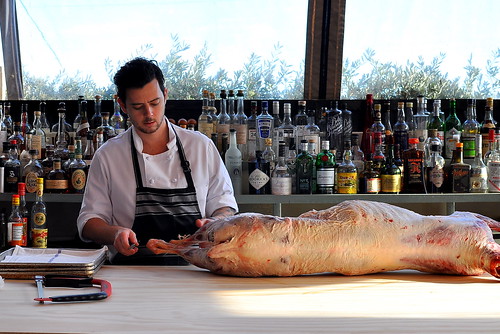 What sets Eveleigh’s Sunday Supper apart from others around town is its educational component. Before sitting down for dinner, diners gathered around executive chef Jordan Toft for a whole hogget butchering demonstration. Here are a few shots from the thoroughly enlightening pre-dinner session. No captions necessary… 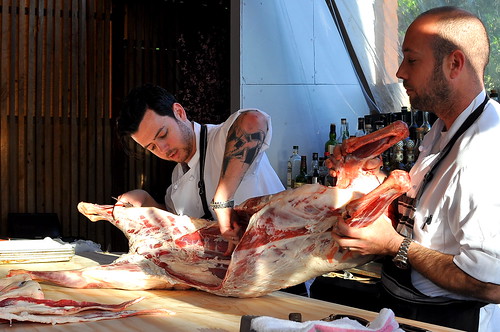 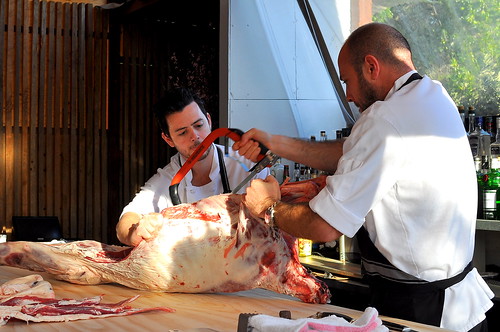 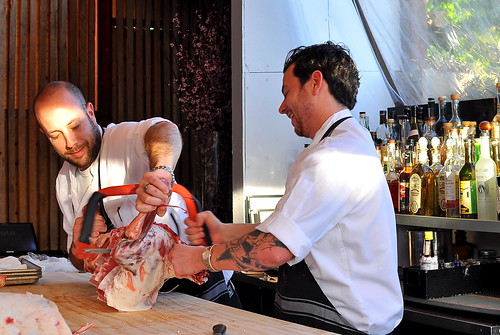 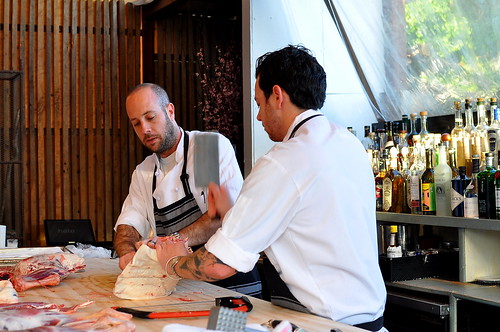 And just like that, the entire animal was broken down into familiar parts: loins, chops, shoulders…wow. 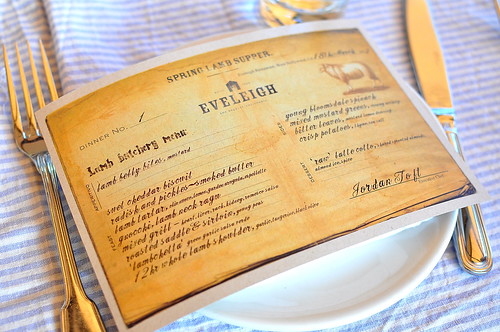 The food at Eveleigh is always seasonal, local, and market-driven, drawing inspiration from old-world European and American country cooking. Tonight’s menu featured hogget at every turn prepared with the kind of “rustic sensibility” that Eveleigh is known for. 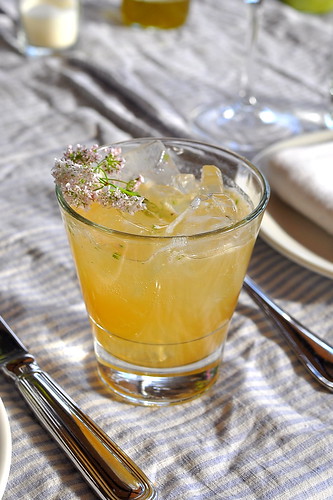 The restaurant’s cocktail program is as seasonal and spontaneous as the food offerings, with plenty of market-fresh herbs, spices, fruits, and house-made syrups and infusions. David Kupchinsky, Eveleigh’s beverage director, crafted four cocktails to pair with this evening’s feast. The welcome cocktail featured gin, Cardamaro, oroblanco, lemon, and Strega, garnished with cilantro blossoms. 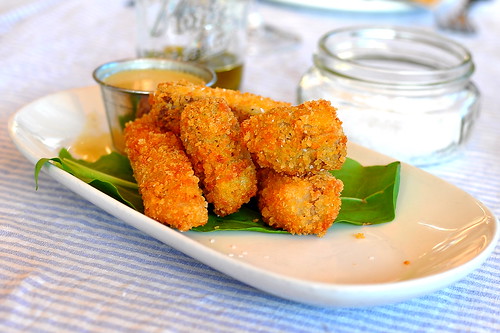 Most of the courses this evening were served family style. The first starter that the kitchen sent out was the lamb belly bites served with a mustard vinaigrette. Crisp and golden on the outside and tender inside, these bellies demanded to be eaten with one’s fingers. 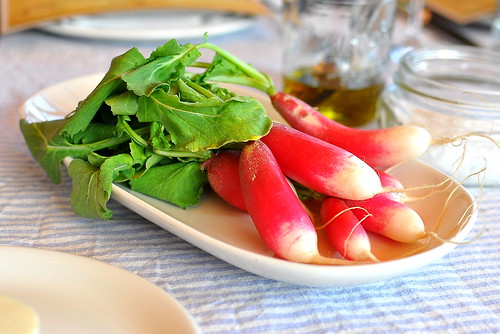 Next to arrive were beautiful radishes served au natural. Snappy and earthy as is, I thought they benefited from a swathe of smoked butter and a sprinkle of coarse salt. 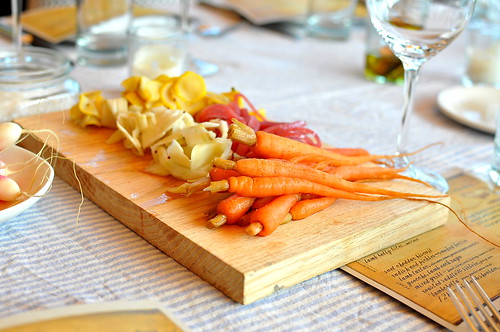 Course upon course of hogget can be a bit much for the palate, so Chef thought it would be appropriate to offer a variety of pickles for balance. It was impossible to keep my fork away from the wooden slate, especially from the shockingly delightful fennel spirals. 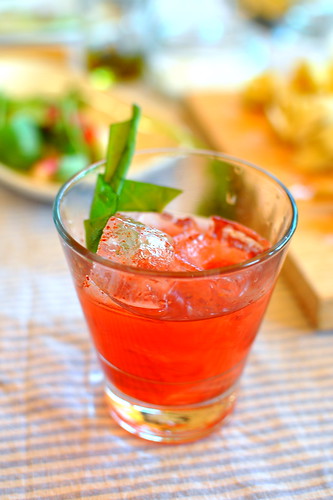 As an appertif, we sipped a cocktail made from lamb fat washed bourbon, Campari, Cocchi Americano, Amontillado sherry, sorrel, espelette, and an Ardbeg rinse.

Two more cocktails followed as the meal progressed. Even though I wasn’t able to capture them properly with my camera due to dreadful lighting conditions, it’s still worth noting that the bourbon libation with Pineau des Charentes, Amaro Ciociaro, Kishu mandarins, and flowering rosemary was stupendous, as was the 12-year-old rum with Carpano Antica, Amaro Abano, vanilla, and roasted beets. David Kupchinsky did an amazing job with the pairings. 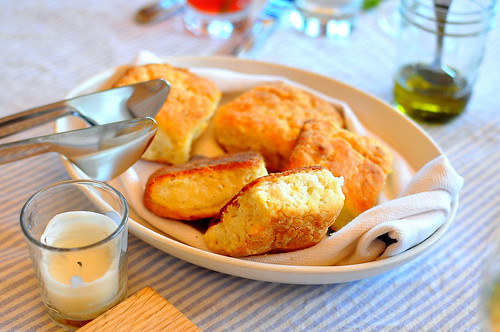 Moving back to edibles, we were presented with sweet cheddar biscuits. Served flaky and warm, the biscuits had a homey quality about them that fit in perfectly with the space and spread. 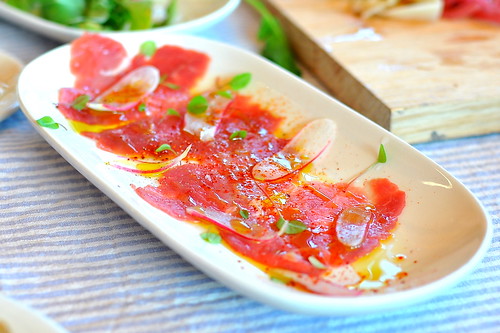 The final lighter bite was the lamb tartar drizzled with olio nuovo and garnished with radishes, lemon, garden arugula, and espelette. The paper thin slices of lamb were surprisingly mild; completely void of any mustiness usually associated with the meat. 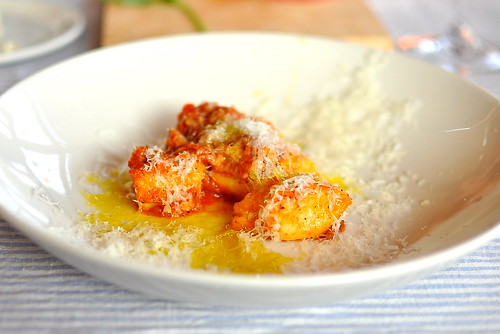 Following the tartare was an individually plated pasta course of gnocchi and lamb neck ragu. The texture of the pasta was as pillowy as we hoped, while the ragu was bold and deeply satisfying. The Astronomer and I both scraped our plates clean; not a shard of cheese was left once we were through. 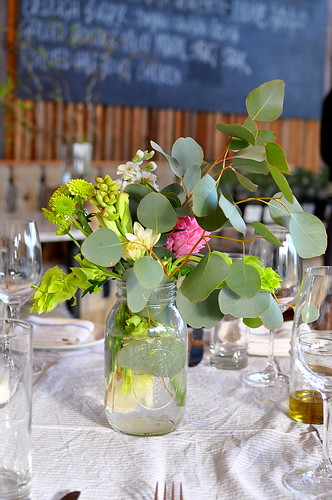 The meal continued to progress at a leisurely pace, allowing both conversation and wine to flow freely. The only downside to the pacing was that my camera was out of commission for five courses due to insufficient lighting. Hopefully my descriptions will do justice to the wonderful food we were served.

The final four savory courses highlighted hogget in interesting ways that I rarely encounter outside the San Gabriel Valley.  The “mixed grill” featured heart, liver, kidney, and “rack” served simply with a romesco salsa. The kidney had a loveable funk to it.

Next, we were served tender slices of roasted saddle and sirloin accented with young peas. We could really sink our teeth into the roaring rare meat.

I had just about reached my limit when the “lambchetta” arrived, but I had to make room for the porchetta-inspired preparation. The lambchetta paired incredibly with the housemade creamy dreamy salsa verde.

The final course of the evening was a slow-roasted 12-hour whole lamb shoulder with garlic, tangerine, and black olives. The texture of the meat could not have been any more tender. This shoulder was show-stoppingly great. To round out our meal were sides of Bloomsdale spinach and crisp potatoes. 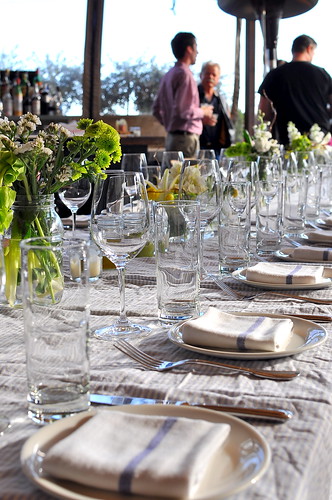 For dessert we were served individually plated latte cotto, a light and jiggly custard made of cooked milk. Plated alongside was a nicely spiced almond ice that tasted like frozen horchata. The final bite of the night hit just the right note.

Eveleigh’s space and and sensibilities charmed me from the start, and the food that followed didn’t disappoint. The next Sunday Supper is scheduled for April 29, and the focus promises to be pork-centric ($75 per person, advanced purchased required). 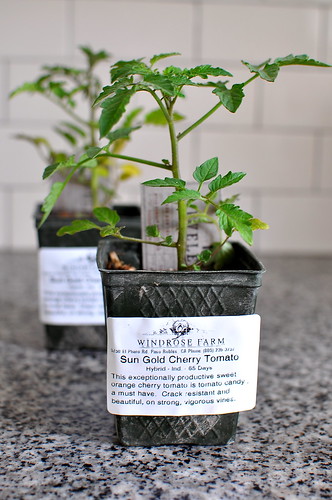 As a parting gift, every diner was sent home with a baby tomato plant. The Astronomer re-planted ours in larger pots this past weekend. We can’t wait to harvest our first batch of Sun Gold cherry tomatoes come summertime.