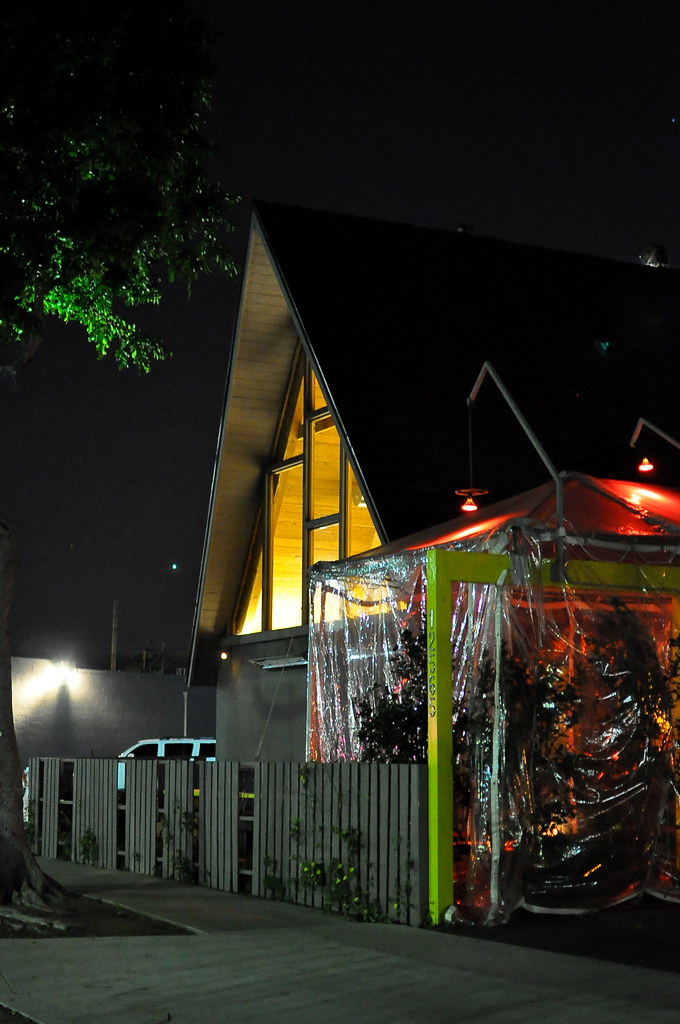 I found myself on the west side of town last Monday night following a photo shoot at Sotto. Rather than hop in my car and make the long drive home at the tail end of rush hour, I convinced my friends and fellow Eastsiders, Nastassia and Diep, to meet me for a bite to eat. Our destination this evening was A-Frame, stop number two on the Roy Choi Express. Choo choo. 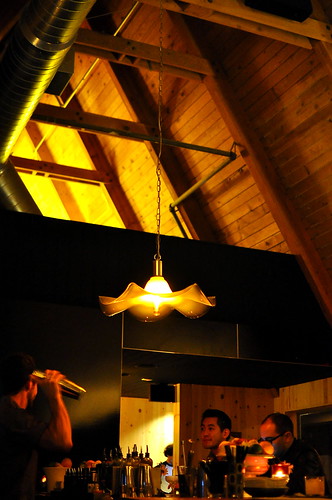 While Chego dishes up “refrigerator food” in a fast-casual setting, A-Frame is a full-service “modern picnic” channeling the aloha spirit.

Chefs Jude, Chris, and Fernando on the beats. Beth on the sweets. Picnic! – @RidingShotgunLA

There’s usually a long wait due to the restaurant’s firm no reservation policy, but the crowds were mellow tonight, so our party of three was seated immediately. 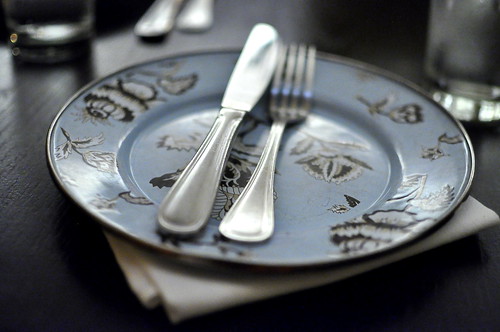 Carrying on the picnic theme were communal tables, do-it-yourself silverware, and perfectly sensible enamelware. Diep loved these little touches, which made the place feel cozy and comfortable. 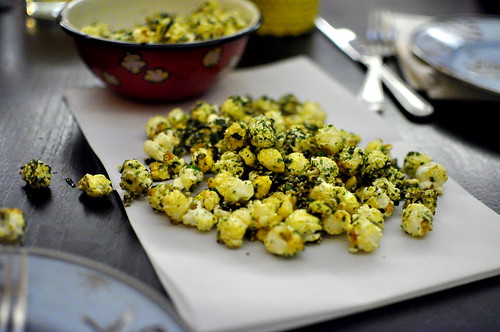 With a cheat sheet of what to eat in hand (curated by our friend Natasha), we were ready to order as soon as we were seated.

Our first bite of the night, Blazin’ J’s Hawaiian-style kettle corn ($6), absolutely killed it. Every fistful of buttery kernels brought a hit of sweetness from Corn Pops, sourness from dried pineapples, savoriness from bacon, spiciness from cayenne pepper and chili flakes, and a whole lot of umami-ness from furikake. This unlikely combination of big, bold  flavors hit it out of the ballpark, and then some. 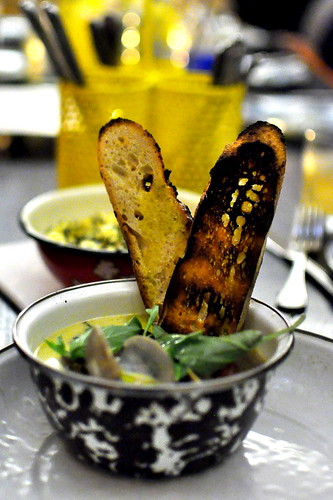 When the “Clam Chowder” ($11) came on the scene, our waiter encouraged us to take a bite of the chowder-soaked bread straightaway before it got too soggy. That first bite, a spongy mouthful of lemongrass, green curry, and coconut milk, was pure magic. On subsequent bites we found fresh basil and bits of pancetta. The fireworks kept on coming. 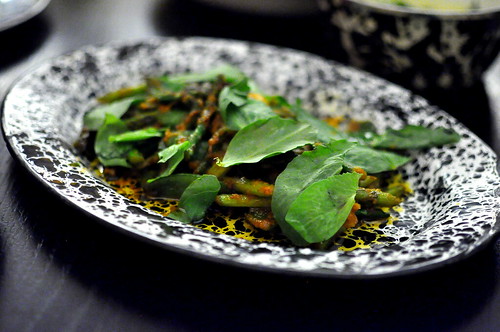 A-Frame recently transitioned its menu from winter to spring. In place of Brussels sprouts were some of the season’s first asparagus ($8). The snappy, skinny, pan-roasted spears mingled with sugar snap peas, snow peas, and rice cakes in a kimchi purée. The assertive sauce was begging to be sopped up with some steamed white rice. Next time… 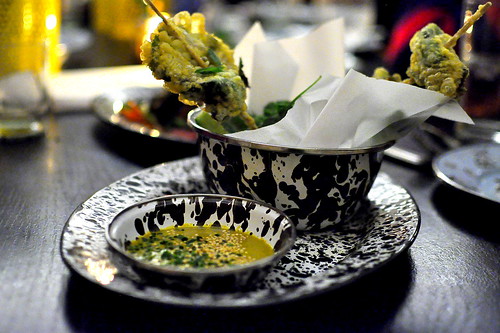 Everything’s more fun served on a stick, and these “Sesame Leaf-Wrapped Shrimp Tempura” ($11) were no exception. We plucked the shrimps from the skewers, wrapped ’em in basil and rau ram, and dunked the whole package in a shoyu dipping sauce. The herbaceous profile reminded Diep of Vietnamese bo la lot. For me, the hot and crisp batter was all that mattered. 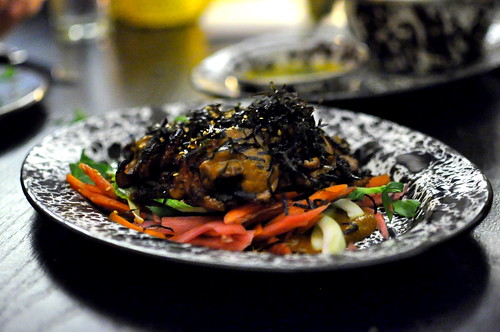 The seaweed-topped “Charred Baby Octopus” ($15), which were served on a bed of bok choy and pickled vegetables with a carrot gochujang puree, were meaty little morsels. My octopus-loving Astronomer would’ve swooned over this dish. 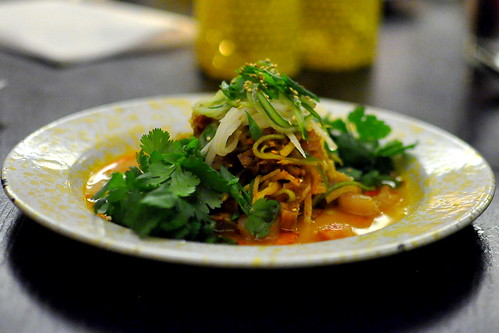 We were hoping to taste A-Frame’s much-loved “Knuckle Sandwich,” but had to settle for the “Stop Pretendon” ($11) because the former was no longer on the menu. Here, slices of beef tendon mingled with pickled daikon and cucumber in a soy chili vinaigrette. A cold beef broth added the finishing touches.

I usually associate tendons with steaming bowls of pho, but this preparation shined a whole new light on the oft-overlooked part. Who knew tendons made such a fine addition to a fresh and light salad? 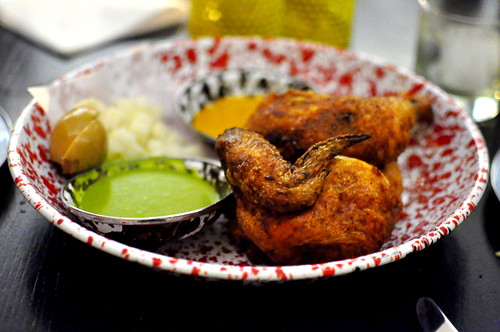 The dish that A-Frame is best known for is a little somethin’ somethin’ called “Cracklin Beer Can Chicken.” Our half bird ($13) was slow cooked in a rotisserie oven, then hit the fryer just before hitting our table.

The meat was as juicy and supple as we had anticipated, while the skin was taut and crisp. Served alongside were pickled daikon radish, a century egg, and two sauces—the “salsa roja” had a Mexican profile, while the “salsa verde” had an Asian one. We were torn over which dip was tops. Oh, everyone wins when it comes to dipping! 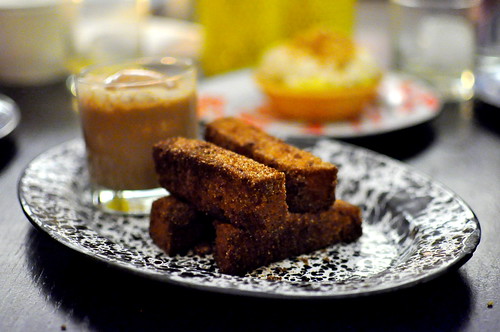 “Beth on sweets” did a standout job on A-Frame’s desserts. The “Chu-Don’t-Know-Mang” ($7) pound cake cinnamon churros were dynamite eaten straight up and even better dunked in malted chocolate milk with vanilla ice cream. I had no idea before, Mang, but now I totally know. 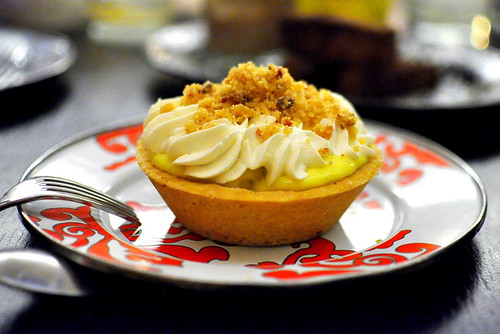 We also adored the “Banana Bacon Cream Pie” ($7). This wasn’t an ordinary banana cream pie with bacon sprinkled on top. Care was taken to make sure that bacon bits permeated the crust and that bacon fat laced the pudding. It was an in-your-face bacon and banana bonanza. Had the crust been flakier, we would’ve proclaimed it the night’s best dessert. The churros had you beat, Mang. 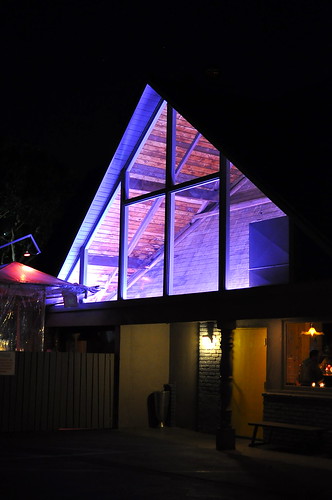 Thanks for showing three girls from the Eastside how a picnic dinner’s done. Next stop, Sunny Spot. Choo choo.