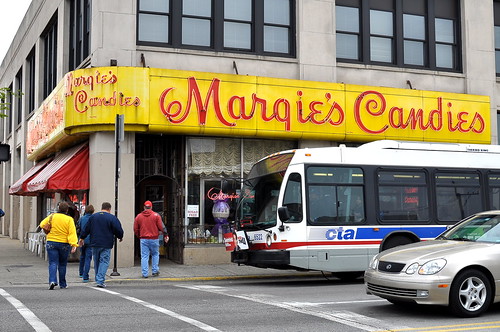 I wish I could take all the credit for following up lunch at Hot Doug’s with dessert at Margie’s Candies. But alas, that brilliant idea was all Roy Choi‘s. He’s a self-proclaimed hot fudge sundae fiend and sent me to Margie’s for a pitch perfect specimen. Hot dogs + Hot fudge sundaes = Hot damn. 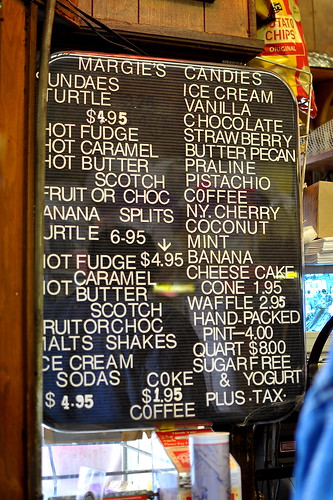 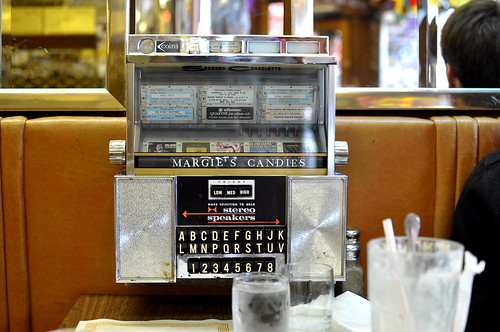 Stepping inside Margie’s Candies, it doesn’t seem like much has changed since the shop first opened eighty years ago. The space has an antique chic way about it, while the service is quick and friendly.  Sliding into our brown pleather booth, The Astronomer and I admired the table side jukebox. Nifty. 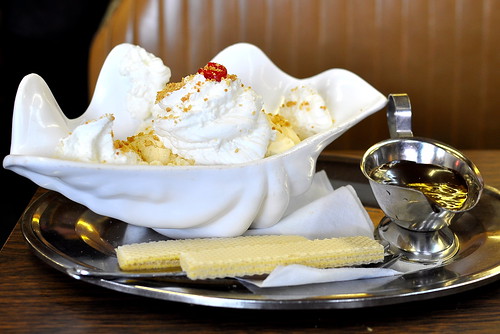 Our initial plan was to share a hot fudge sundae between our party of three, but a $2 per person split charge convinced us otherwise. Instead, my girl Kellie and I shared the hot fudge sundae, while The Astronomer ordered something extra for himself. I kind of like being bullied into ordering more ice cream than necessary. Kind of.

The hot fudge sundae ($4.95) was delivered on a fancy silver platter with a gravy boat filled with fudge on the side. Heaped into the signature clam-shaped bowl were two scoops of  house-made French vanilla ice cream (18% butterfat), mounds of whipped cream, crushed peanuts, and a Maraschino cherry on top. Two vanilla wafer cookies added a classic Margie’s touch. 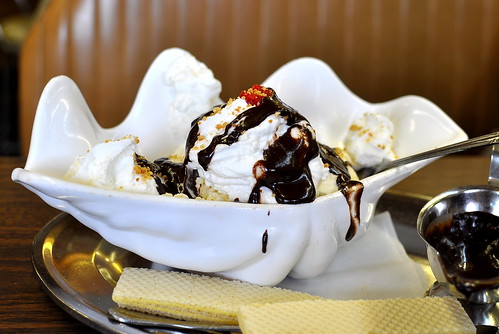 After Kellie drizzled the made-from-scratch fudge over the entire landscape, we dug in with long spoons. It was a killer sundae, just like Roy promised. A classic perfected. 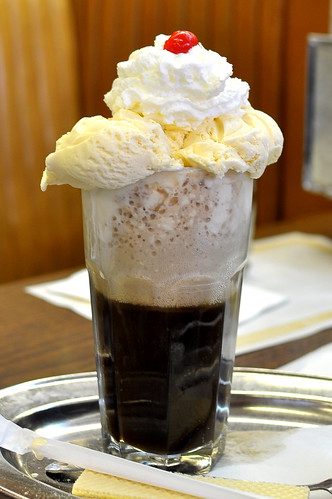 The Astronomer’s root beer float ($4.95) was a thing of beauty. Two scoops of French vanilla spilled over the rim, and as an added bonus, there were whipped cream and a cherry on top. The glass’ contents could barely be contained, and in return, we could barely contain our excitement. Slurped and spooned, every bite was fizzy, creamy, dreamy.

Interestingly, a glass of seltzer water was served on the side to dilute the float’s sweetness if necessary. We found the float to be just sweet enough and sipped the seltzer straight up.

Margie’s place is located just two miles from Doug’s, so be sure to follow up your dogs with an old fashion ice cream treat. It’s the delicious thing to do.