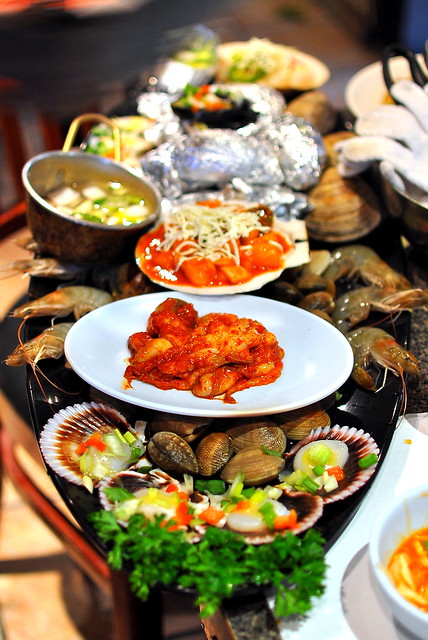 The Astronomer and I couldn’t escape the smell of grilled seafood the morning after our banquet at Koreatown’s Jae Bu Do. The distinct nose of burning embers, meshed with a hint of gochujang, seemed to follow us around the apartment, even though we had both showered and tossed last night’s clothes in the wash.

After searching every corner for the culprit, we finally discovered that the smell was emanating from my cell phone.  The evening’s flavors had soaked into its plastic screen, so every time I sent a text or made a call for the next couple of days, the delicious memories from Jae Bu Do came wafting back. It was glorious and maybe even a little gross. 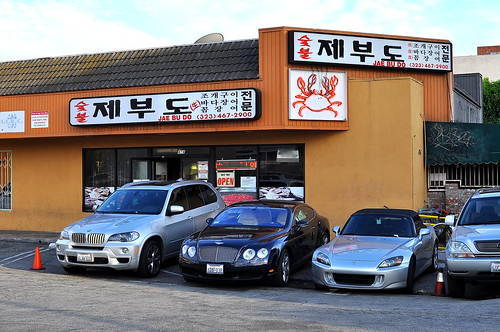 Jae Bu Do has been on my friend Ben‘s list of restaurants to try ever since Jonathan Gold wrote about its slimy hagfish back in 2010. While the awful-sounding fish is no longer on the menu, Jae Bu Do continues to grill up a plethora of fabulously fresh fruits of the sea tableside. 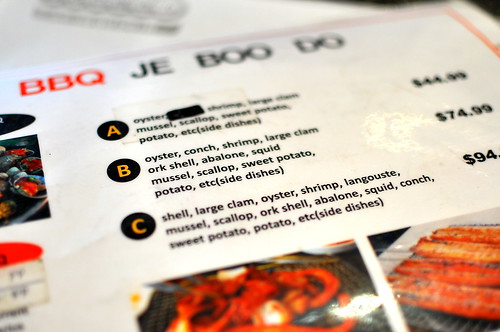 The wait for a table was nearly 40 minutes when our party of three arrived at 7 PM on a Friday night. With plenty of time to weigh and debate the three menu options at hand, we were ready to order as soon as a table opened up. We chose option B ($74.99), which included all sorts of good stuff like oysters, shrimp, and “ork” shell, and was ideal for groups of three to four according to our waiter. 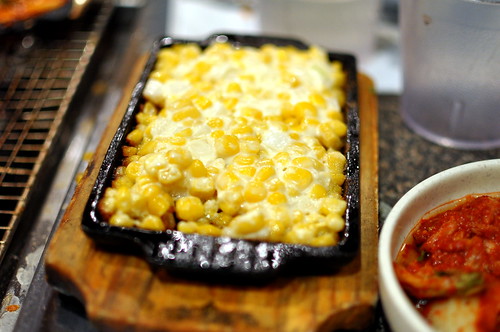 In addition to the boatload of seafood, we were treated to a slew of complimentary side dishes. Served on a hot skillet, the cheese- and mayonnaise-laden corn was caramelized on the bottom and sweet and creamy all over. We loved it so much that seconds and thirds were requested. 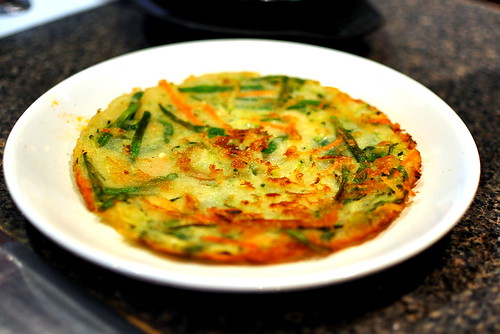 Despite being a little greasy, the vegetable pancake was also a hit with us, especially the crisped and browned edges. 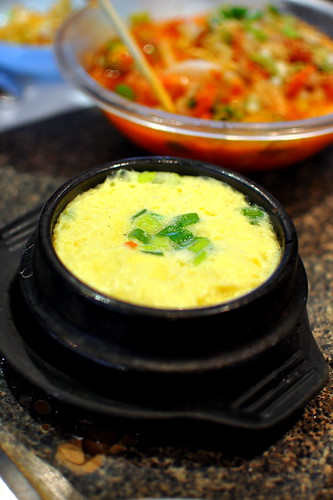 I never understood the appeal of steamed egg until tonight’s feast. As our tongues were punished left and right by the scorching seafood and spicy flavors, a bite of the soft curds mellowed everything out. I totally get it now. 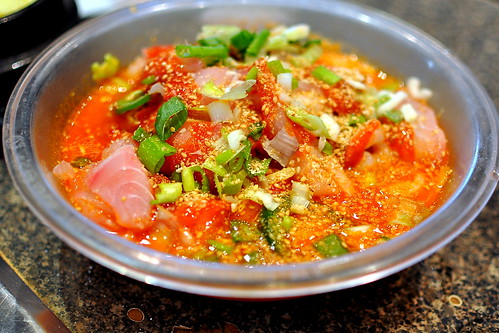 The last side dish was comprised of slices of raw fish and cooked shrimp marinating in a chili and sesame dressing along with cabbage, scallions, and jalapenos. While the dressing looked fiery as hell, it tasted only mildly spicy with a strong sesame kick. I loved every bite of this one. 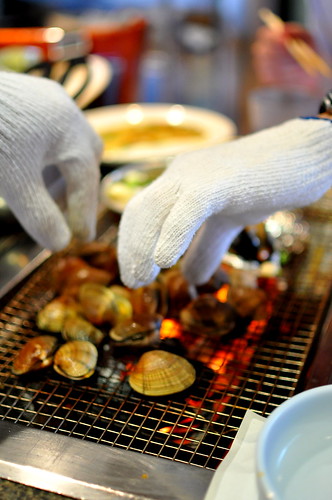 We commenced the grilling portion of the meal by slipping on sexy white gloves. These allowed us to pluck the hot morsels straight off the grill and swiftly deliver them to our mouths without having to fuss with utensils. Pure genius. 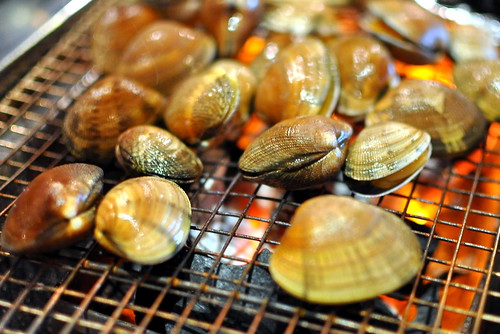 The first nibbles to hit the grill were the clams, which sprung open just as soon as they encountered the sizzling grate. Tender meat coupled with juicy innards made these simple and satisfying. 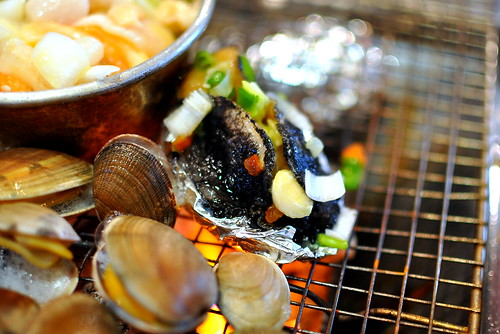 The abalone, which was still alive when it was set on the grill, suffered a long and tortuous death at the hands of the heat. As soon as it met its fate, our waiter swooped down and snipped it into thirds with a pair of kitchen shears. While its chewy texture didn’t win any fans, slathered in fermented sesame paste it tasted just right. 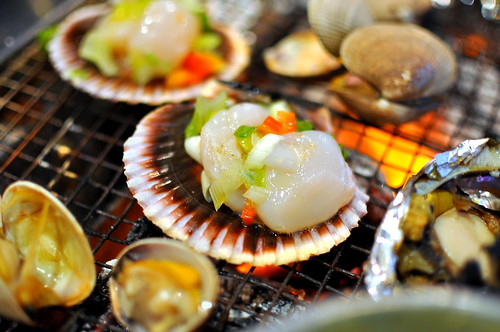 The scallop was dynamite both in raw and cooked form. The former was downright silky, while the latter had a pleasant snap. 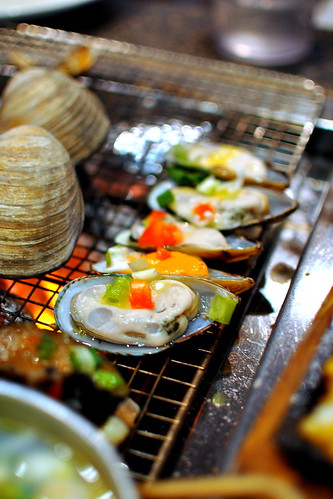 The mussels were meaty little bites that didn’t need any sauces or enhancements to shine. 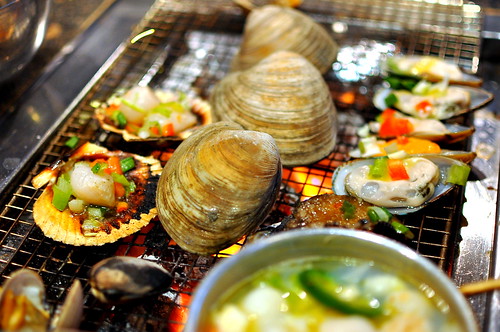 The giant clam had a salty way about it and tasted distinctly of the sea. 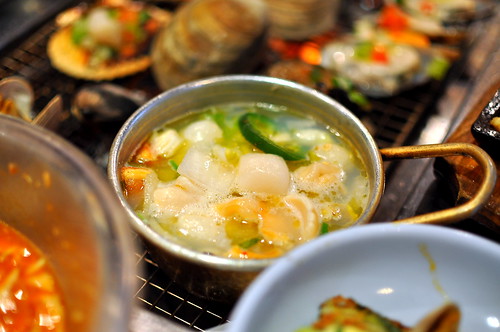 The grill was also used to heat up to two buttery, mildly spiced soups. The one in the metal pot contained scallops, shrimp and abalone… 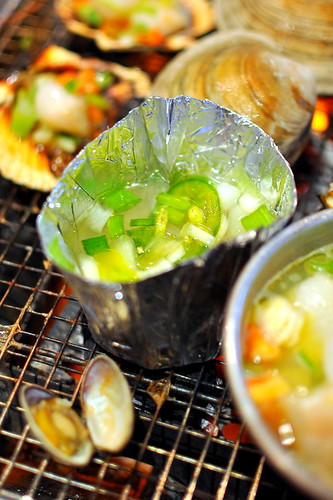 …while the one wrapped in tin foil was brimming with baby scallops. 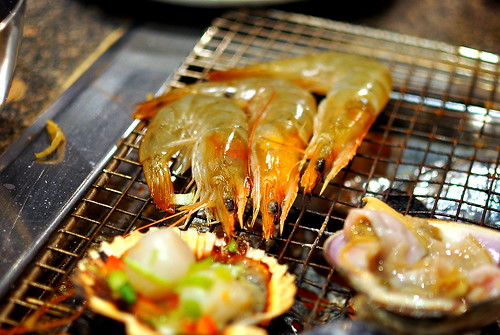 The head- and shell-on shrimp were somewhat pedestrian compared to the other morsels on the grill, but we loved ’em all the same. I was quite proud of Ben for sucking all of the sweet juices from the heads—it’s the best part of the shrimp. 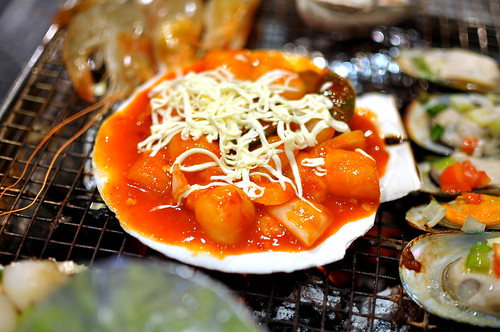 The scallops swimming in gochujang arrived on the half shell. These saucy bites offered a great contrast to the minimally adorned morsels. 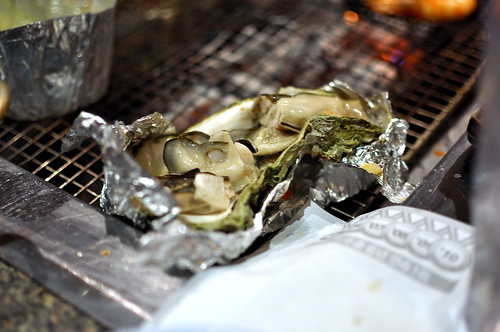 The oysters echoed the flavor of the giant clam—unabashedly briny with distinct notes of the sea. 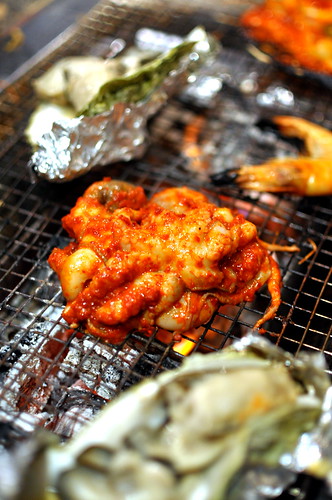 The final fruit to be grilled was the octopus. The head proved to be the most delightful bite, while the tentacles were nice and chewy. 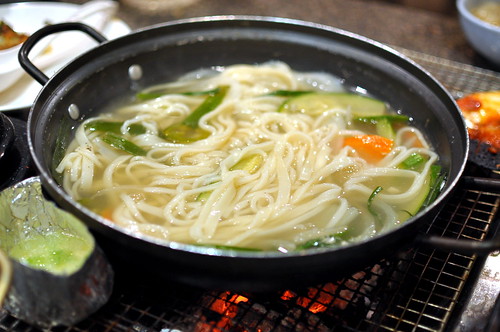 One of the highlights of the spread came near the end—a beautiful noodle soup with vegetables and knife-cut noodles. Even though I was stuffed like you wouldn’t believe from all that seafood, I managed to slurp down a bowl. It was warm and comforting. 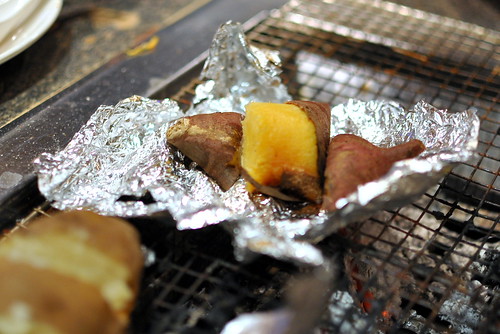 Dessert came in the form of two potatoes, one russet and the other sweet, that had been baking amongst the burning embers during our meal. Potatoes make finer desserts than I would have imagined.

Even though Jae Bu Do stank up my phone and made my eyes water due to poor ventilation, I can’t wait to return again along with a posse of seafood-loving friends. This place is awesome.