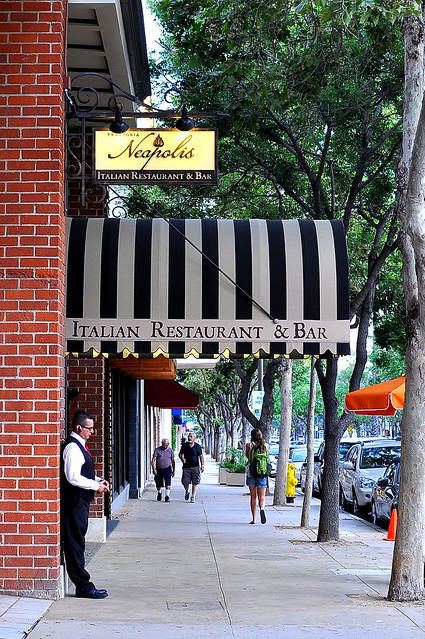 The opening of Trattoria Neapolis early last week was easily the most exciting thing to happen on South Lake Avenue since I moved into town four years ago. Sandwiched between an Aaron Brothers and an Anthropologie, the restaurant brings a California-inflected Italian menu, as well as a solid beverage program, to a part of Pasadena best known for Pie ‘n Burger. God knows I adore Pie ‘n Burger, but a new dining option is always appreciated. 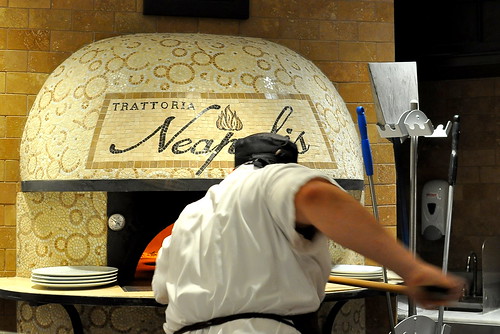 Chef Bryant Wigger, most recently at the Four Seasons Los Angeles, makes almost everything from scratch including the pasta, bread, and salumi. The restaurant’s centerpiece and point of inspiration is a 7,000 pound Neapolitan wood-burning oven that can blister a pie in 90 seconds flat. 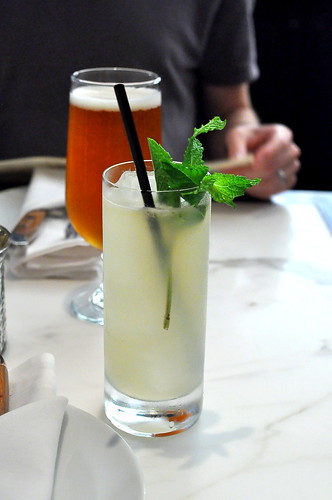 While perusing the menu, I sipped a spicy Moscow mule. The Astronomer indulged in a tall glass of Golden Chaos. 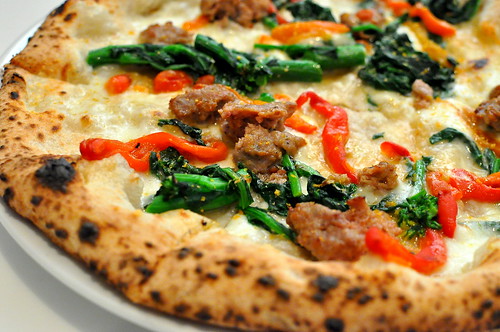 Our spritely waiter Richard suggested a pizza to start because the wood-burning oven was the reason why Trattoria Neapolis came to be. The funghi pie was calling my name, but alas, The Astronomer’s not much of a wild mushroom lover, so we settled on the Agnello ($15) instead.

This pizza came topped with crumbles of house-made lamb sausage, sweet red peppers, rapini, Pecorino, and orange zest. Aside from the slightly-too-bitter greens, we liked everything atop our pizza very much. 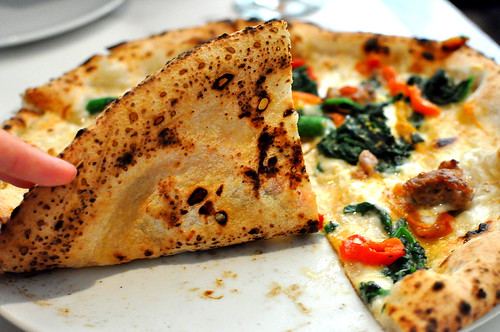 The crust was dynamite as well, with a notable and pleasant chew. Oftentimes Neopolitan-style pizza crusts are over-charred in spots, but this one didn’t suffer one bit from uneven cooking. 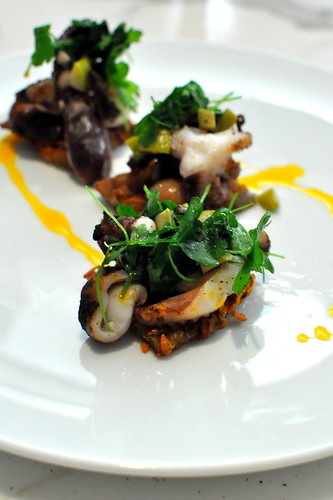 The Polipo ($8), wood-grilled baby octopus with crispy potato torta, Cerignola olives, and tomato oil, had lots of great flavors and textures going for it. Our only dislike was the potato base, which tasted like it had been deep-fried a few minutes too long. 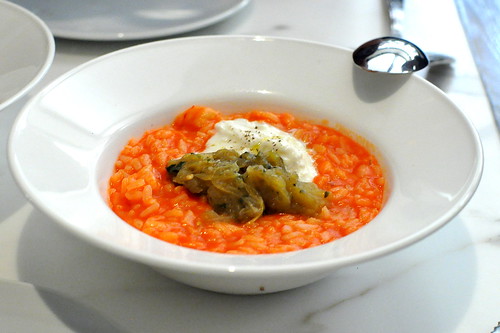 From the appetizer courses, we moved on to a parade of pastas. Our waiter was nice enough to course out the four dishes that we chose, two at a time,  so that we wouldn’t be overwhelmed. By the way, pastas are available in half and full-sized portions. We went with the former in order to sample a greater variety of dishes.

The Astronomer’s favorite pasta was the tomato and shrimp risotto topped with burrata and roasted eggplant. He found it creamy, well balanced, and a pleasure to eat. Best of all, the shrimp were nice and snappy—not overcooked in the least bit. 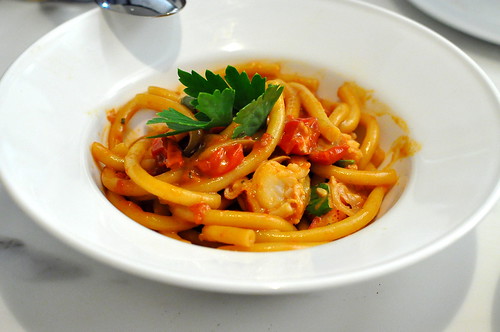 My favorite noodle of the night was the Aragosta ($19), bucatini with Maine lobster, Sweet 100 tomatoes, Calabrian chili, and lobster sauce. The noodles’ texture couldn’t be beat, while the lobster meat was sweet as can be. 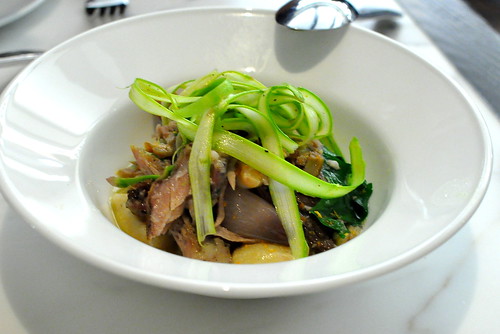 The roast garlic gnocchi was packed with tender shards of smoked pork shoulder, artichoke, and asparagus ribbons in a light broth ($9). The abundance of pork made it the star of the dish, while the gnocchi seemed to play second fiddle. Still, the bites of gnocchi that I managed to dig out were light and appealing. 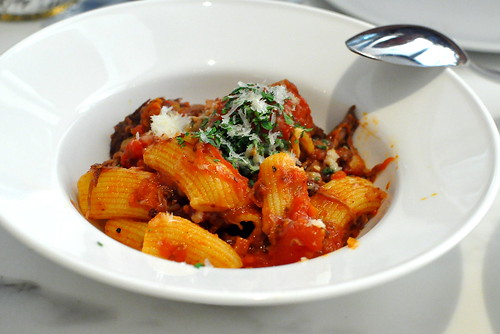 Our final pasta dish this evening was the rigatoni with short rib Bolognese, pancetta, and Grana Padano ($10). Both the house-made pasta and the sauce were solid, if not particularly memorable. 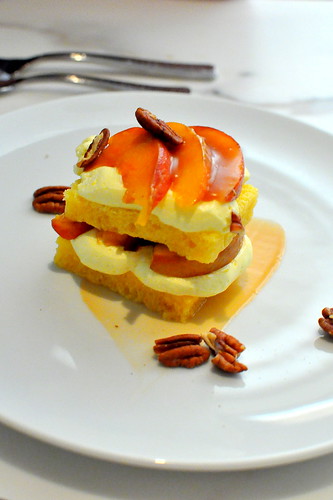 We finished up with an interesting take on tiramisu ($9) composed of house-made ladyfingers soaked in amaretto and peach liquor and layered with mascarpone cream, peaches, and caramel. While The Astronomer desired a moister tiramisu, I found it nice the way it was.

Our dinner was most satisfactory considering that we visited Trattoria Neapolis on its second night of service. While the pastas were mostly good, it was the pizza that really made the night for me, especially Chef Wigger’s perfectly stretchy and spotted crust. You bet your boots The Astronomer and I are going to be stopping by for a slice (and a cocktail) on the regular.